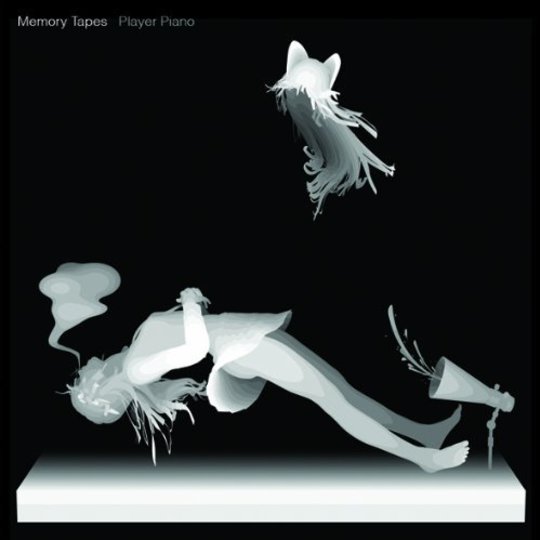 Dayve Hawk is not a man who seems particularly comfortable in the limelight. In fact, so attuned to the shadows does the brainchild behind Memory Tapes appear, you suspect one moment in the neon glare of fame would render below him a sweaty pool of anxiety as he gnaws and gnarls his way, rat-like, back into the sanctity of anonymity – a place where all good bedroom-bound producers prefer to reside in these prevailing times.

Given this predisposition to invisibility, the follow up to Hawk’s blog-wooing 2009 debut, Seek Magic, throws a surprising curveball: his voice. For all its homespun beauty, Player Piano’s most noteworthy trait is the omnipresence of Hawk’s airy tone. Sure, it was there on Seek Magic, but it was a backseat companion to the record’s glowing soundscapes. Here, its hands are firmly on the wheel, driving the album into fresh pastures and – surely to Hawk’s chagrin – wider spheres.

‘Wait In The Dark’ is an early flagbearer of his saunter to the vocal fore. A luminous shifter of pop melody, the wiggling synths and agile percussion bear heavy Postal Service hallmarks, albeit with Hawk’s crotch tightening mew replacing the emotive strains of Ben Gibbard. It’s an irresistible opening, doused in love-struck regret and indicating a new approach to song creation, where organics replace synthetics.

Despite its ever-expanding chill-wave contours, Seek Magic was at heart an industrious play on highbrow French house, built on robotic arrangements and primal dancefloor urges. Player Piano finds Hawk scrawling a new signature, crossed and dotted with thick, rich swathes of sound, rather then textures. What he’s created is a record pounding to the beating heart of pop; alive to the nuances of live - or at least live sounding - instruments (particularly keyboards), translucent melodies with a sweet spot and cheek dampening narratives.

Of course, to call it a pure pop excursion does Player Piano a disservice. Complexity rolls through the record’s contents like an antidote to puritanical song structures. ‘Sunhits’’ rollerblading rhythm may shimmer to surf guitar, but the deep choral undertones balance out the slinky, early Nineties swell. Likewise, the simplicity of ‘Offers’’ blissful, day-breaking melody is offset by the foibles of a tin-can synthesizer cross-stitching its way across the cut’s zesty exterior.

Lyrically, the focus often falls on the aftermath of a tumultuous relationship. Through the two-part run of ‘Fell On Ice’, Hawk is buried deep under emotional rubble, examining the remaining painful shards while insisting “I don’t want to remember”. This poignant moment finds Hawk’s brittle tones accentuated by the quiver of an abandoned guitar. Part II washes away such melancholy; a cloud-bursting ivory key shower suggests hope is on the horizon, although you suspect Hawk never quite believes it.

But it’s not all doom-harbouring and girlfriend grieving. ‘Today Is Our Life’ is a striding, steel drum lather of ebullience that grins widely like some Yeasayer-inspired special of Glee, bearing proclamations of “we will never be better off than we are”. Less sweetened, ‘Worries’ opens on a looping Hammond rhythm and pounding tribal beat. From there, it explodes as a hazy ray of optimism, the thick carp of instrument ladling out an impossibly infectious chorus.

Complex of subject matter and sound, Player Piano could have been weighed down by intricacy. Instead, Hawk has interwoven his artistic lusts with clean melodies, creating a nailed-on summer soundtrack that treads the precipice between romantic laments and illuminating, cocktail-shaking jaunts. For someone who’s naturally inclined to back his way into the shadows, this is the sound of a man taking a significant step forward. The limelight awaits.