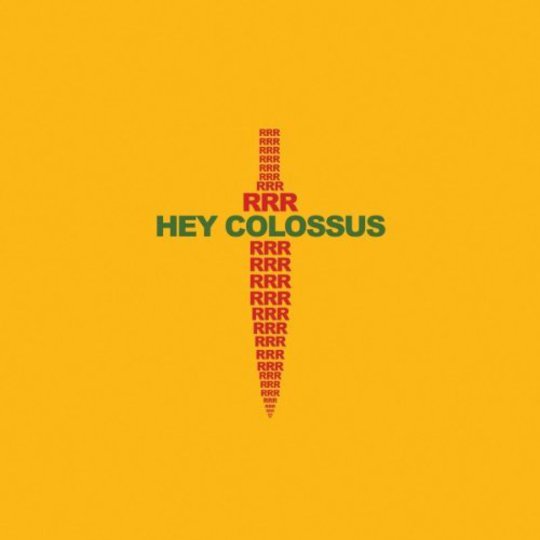 Hey Colossus have been releasing records for seven or eight years now and they always get good reviews and have a core of a few hundred people who buy them without much thought (this writer included) and their ‘prowess’ in the ‘live arena’ is ‘fabled’ and they form an important part of a recognisable and creative scene of noisy belligerent London rock bands and heck, why don’t I just say it, they have cult appeal. HOWEVER, when compared to… comparable bands who have been plugging away since at least the first half of last decade, in a similarly uncompromising mindstate, it seems like they’re in a bit of an impasse.

The two that spring to mind for me here are Boris and Oneida, who share with Hey Colossus an ability to lock into cyclical hard rock lock-grooves, switch between styles without seeming magpie-ish, and smuggle vicious noize in under cover of relatively friendly tunes. They’ve both become significantly bigger since 2004, which ushers in that old grouch about British bands not being taken as seriously when they do ‘this kind of thing’; this, in turn, invites people to get on the defensive and suggest that you only like them because they’re British. What a wretched to-do. And all this while, Hey C just keep thudding away, chonging out, releasing crazy/great album after crazy/great album. RRR is their sixth proper, full-length joint, and they’re getting closer to actual uniqueness each time.

‘Unique’ is used relatively, of course. You can’t stamp a copyright on droney instrumental jam room gurgles with deeply-buried meditation-intonation vocals, spaghetti Western parts and an excerpt of a conversation by someone with a strongish South London accent – but that’s what ‘Teased From The Nest’, the first track, is, and it’s hard to think of (m)any other bands who this could be. Scads of bands out there splice Krauty repetition and sludge ugliness, indeed you might think the combination ‘played out’, but they don’t tend to do it as well as ‘The Drang’ and ACTUALLY sound like Eyehategod caught in an inescapable cold turkey trance. Synthesisers, a relatively new weapon in Hey C’s inventory, are possibly not being used this excellently as a noise weapon by any other fringe rockers out there – ‘Rotated For Success’ has this motorik drill thing going on, super-muffled noise dude vocals and astrally piercing modulations, all of which adds up to something pretty chi-bothering.

‘Almeria, Spain’, an instrumental, is like the sludgiest thing Bardo Pond never brewed up; alternatively, if you happened to hear Virginian doom band Cough’s monumental Ritual Abuse album from 2010, it measures up to parts of that. It sits next to ‘Warmer The Belter’, where notes are sparse and drawn out and a sort of calm takes hold, albeit an eye-of-the-storm calm; yet you never get that “hey, not sure if you noticed but we’re pretty eclectic, looks a bit more impressed maybe?” subliminal message feeling. Although it helps that both these tracks feel at least partly improvised, and run into each other (as with all seven on the disc) this speaks volumes for Hey Colossus’ ability to craft a personality and aesthetic belonging to them. They are ribald (the final track on here, a Buttholes-worthy deathpile of freeky FX and ritualistic voices, is topically titled ‘I Am Bunga Bunga’); their ribaldry is sometimes specifically British (their last album was called Eurogrumble Vol. 1, which suggests a long and glorious history of buying Viz from motorway services to stave off van boredom). They are however extremely serious about making killer out-metal, and even if they don’t seem that anxious to become a self-sufficiently big and properly appreciated band… well, maybe we the world should force it up on them.