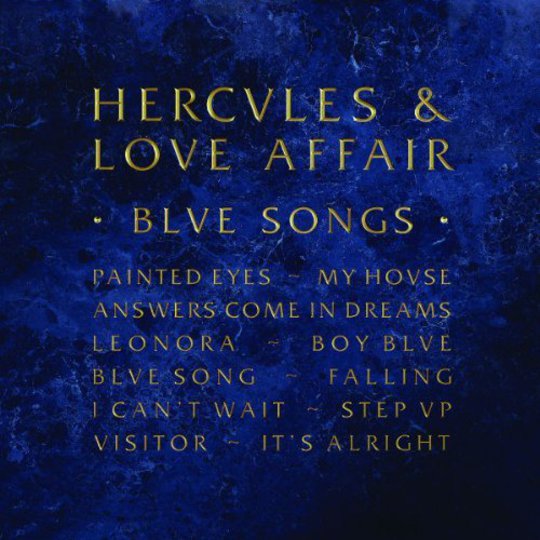 As warp-speed broadband becomes universal and old-media hurtles towards a messy digital apocalypse, few job titles seem less tenable than ‘music journalist’. The reasons for this have flooded Twitter streams for months now, so let’s put aside the active-consumerism filler about how even Grandad’s got himself a wonkstep Tumblr and instead focus on Hercules & Love Affair’s new video ‘My House’.

This video, much like the accompanying music, provides a fresh way of negating the need for critical analysis by emulating MTV Grind circa 1992 so accurately that only a Simon Reynolds-level acid-anthropologist could tell the difference. It’s certainly a remarkable feat, but as with the majority of Blue Songs it’s so overtly referential that your enjoyment hinges precariously on just one question: do you have a tremendous predilection for full-body jackin’ acid-squelching diva-house?

You see, Blue Songs does not share the same sumptuous, elegiac quality which propelled HLA's debut album and lead single ‘Blind’ to such swirling disco heights back in 2008. Indeed, Antony Hegarty is not involved at all this time round. Instead, Herc’ main man Andy Butler adds to his Love Affair troupe (Kim Ann Foxman and Aerea Negrot – both mainstays of their live show) by roping in help from the likes of techno-whizz Patrick Pulsinger, fan-turned-contributor Shaun Wright and even * gasp * KELE OKEREKE. The result is a nostalgia-trip of a record which serves as a tribute to Butler’s adolescent tastes rather than a signpost towards the future.

Of course, this isn’t necessarily a bad thing if you were raised in Studio 54-era New York and possess an ear as finely-tuned as Andy Butler. Much like his ex-DFA colleagues (Maclean, Murphy et al) he’s always shown an enormous ability to channel the glitterball-haze of discos gone by with every TR-909 beat. Accordingly then, this album is a faithful voyage through disco and house memories, largely bypassing the soulful warmth of songs like ‘Hercules Theme’ and ‘Athene’ in favour of a sound far more reminiscent of the synthetic bleeps n’ glitches of late Eighties and early Nineties house.

‘I Can’t Wait’, for example, takes a warped minimal groove detuned to the point of self-destruction and combines it with female vocals that stretch towards euphoria before being dragged back into a tangle of mutated-loops. It’s fantastic, following a similar recipe to last album’s ‘Raise Me Up’ in stirring together equal parts joy and melancholy to create a compelling cocktail of emotion. Similarly opener ‘Painted Eyes’ begins with familiar oc-tave oc-tave bassline and doleful vocals before pinning you to the dancefloor in a flurry of technicolour strings.

Blue Songs may indeed be celebratory and nostalgic, but you can’t help but wonder if Butler is held back by his own self-imposed conventions. ‘Visitor’ for example may or not be simply incidental music cut directly from the 1993 Clothes Show. ‘Falling’ is as generic as its title suggests, whilst ‘Step Up’ could be pulled directly from an early Nineties acid-mixtape. Oh, except its got Kele Okereke singing on it. And you know, it’s alright! His resonant, emotive voice is deployed to good effect here, perhaps he’ll shake that ‘I’m still Kele from the Bloc’ tag after all eh?

In all, it’s hard to have any real gripes with Butler’s talent as a producer, DJ or songwriter. In a recent Guardian interview he states how he wrote the gently wistful ‘Boy Blue’ as a paean to Sinead O’ Connor aged only 15. Thing is, with this level of ability you might yearn for his maverick talent to veer off in an altogether weirder direction than Blue Songs manages. I remember once reading an interview with James Murphy where he states his favourite heckle is to yell ‘Oh I have this record too!’ at the hapless band. You may find yourself playing a similar game of vinyl-bingo here, most obviously on closing song ‘It's Alright’, a toned-down and somewhat questionable version of an old Sterling Void 12-inch.

Ultimately, it’s an enjoyable record, but one that’s more likely to point you in the direction of their original influences than achieve notability in its own right. Failing that, you could always stick on ‘Blind.’