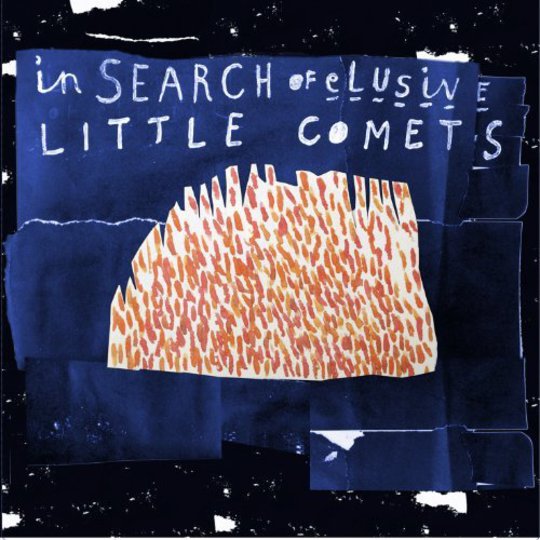 If you were trying to intellectualise the music of Little Comets, you’d think of this, their debut album, as one of those 'typically British' social commentaries. Like Jamie T and Alex Turner they’ve got the cynicism and the perceptiveness to write songs that paint a picture of how it feels to be young and creative in Britain today. Theirs is a world populated by the illegitimate lovers in ‘Adultery’, the smug architect in ‘Tricolour’, the eponymous heroes, villains and anti-heroes in ‘Joanna’, ‘Darling Alistair’ and ‘Mathilda’. Like all the greats – Morrissey, Jarvis – Little Comets stuff their stories with insecure, arrogant, ugly and misguided characters to tell us about the nature of modern youth, you might think.

You might think all of this, and in many ways, or in part, you might be right. But you’d be missing the point, because In Search Of Elusive Little Comets isn’t about defining the twenty-first century. It’s about enjoying it.

You could listen to the lyrics of ‘Adultery’ and think about how painful and self-destructive the sort of romance described in it is, and how telling it is of selfish age we are living in. Or, you could listen to the track like a normal human being, listen to that wonky, stop-start guitar line, do a little wobbly-kneed pogo dance and wonder why Max?mo Park stopped writing pop songs as enjoyable as this.

Likewise, ‘Joanna’ doesn’t really appeal until around midway through, when the guitar hook forces itself to be the focal point of the track and the bass moulds the track into a club-worthy ballad. The more sincere opening section is far less interesting, with absent-minded acoustic chord strums and an annoyingly 'Followillian', half-wailing, half-wanking vocal style.

The track that follows, ‘Isles’, proves that Little Comets aren’t a band to listen to if you’re looking for social insight, but the uninspired lyrics about terrorism and the credit crunch are made tolerable by a Nick Zinner-plays-Gang of Four verse riff.

Little Comets’ weakest moment is by far their most earnest. ‘Intelligent Animals’ is a drab, piano-led closer, made even more confusing by a painfully unsubtle spoken-word commentary on Darfur. Having made an album that bounces with so much groove, why have they decided to try and be Radiohead at the last minute? That said, the lesson that was learned a little earlier from the blandly superfluous ‘Dancing Song’ is that Little Comets may actually need some serious subject matter to prevent them from writing something that isn’t utterly forgettable.

The main thing to remember about In Search Of Elusive Little Comets is to not take its content too seriously. This will not go down as an album that defined our age, and it contains no messages that haven’t been repeated by about a million other indie bands over the last five years. That doesn’t mean it can’t be enjoyed though – it can. Little Comets have some energetic hooks and straight-to-the-point post-punk choruses that would make many of the resident bands in their native North East proud. There just isn’t quite enough to get carried away about.