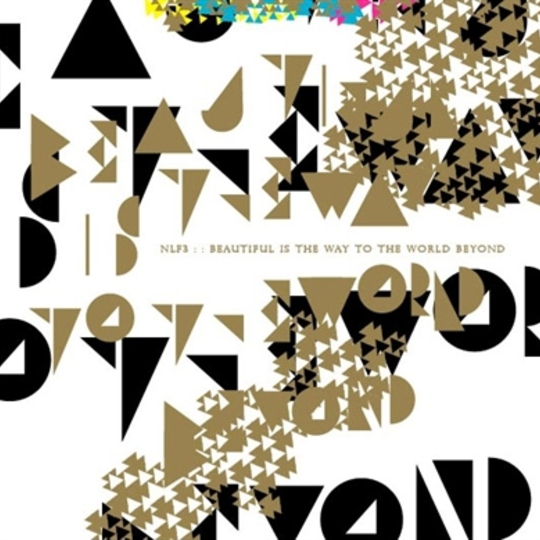 French trio NLF3 brought a lot of fun into the world of progressive instrumentalism with their debut Ride On A Brand New Time. For follow up Beautiful Is The Way To The World Beyond the band have increased the production values and by doing so merge the aesthetic of current-day-pop into the seductive, fluid rush of their intoxicating prog noodlings.

If anything, Ride On A Brand News Time’s only flaw was that you could tell it was made by humans, humans who clearly loved Sonic Youth and Frank Zappa. Their second set sounds so bombastic and slick that you could be forgiven for thinking it was T-Pain or RedOne… if they had completely lost it. The result is pop alchemism that largely sounds software generated, but is still occasionally underpinned by bass lines that thud with doom or Fela Kuti inspired dance-fevers.

Beyond this intriguing new sound for their narratives, the band’s main strength is their ability to make depth and texture sound orchestral; they clunk out drums, splutter funk guitar and twirl noise-loops into pleasing ear candy. ‘Straight Forward’ starts with laid back R&B drums and wiggly gangsta rap keyboard lines, to the point you’d expect Wycleffe or Snoop Dogg to welcome you to the crib/pound, before it all starts to get more complex and beautiful. Rhythms change and become choppy, as Bacharach-esque lounge vocals pair with piano and white noise. You’d be entitled to think this shouldn’t work but NLF3 compose delicately, churning everything into coherent, pulsating series of skewed dance-pop songs.

Ride on A Brand New Time is a new step into the realm of progressive rock, indeed it’s progressive pop. It’s original and loves keyboards and big synth sounds far too much to sonically sit in the Animal Collective, new indie folk bracket yet too restless and intricately woven in structure to be chart fodder. So what remains is something that could slip through the gaps. The concern is that NLF3 compose with such precision that this doesn’t feel like a record that wants to be ignored or that willfully jars two contrasting styles together to solely make a point of doing so. Thirty years ago pop and progressive music may have been sonically closer and may not have jarred so fiercely. Today pop is fascinated sub bass synths and force-feeding its top lines to singers as puppet presidents. In this light NLF3’s achievement in harmonizing two ever-diverging art forms is given extra gravitas. Ultimately this is a beautiful, unique and sincere album of instrumental pop. Don’t let it get away.