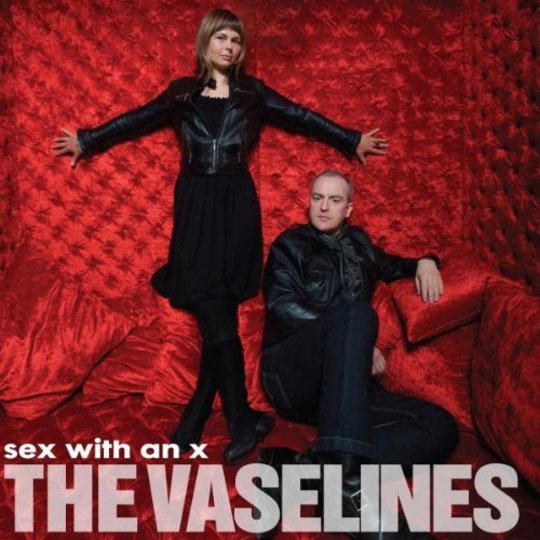 The Vaselines have surprised us a few times in recent years. It was a bit unexpected when they reunited for Sub Pop’s 25th anniversary 2008. It was more unexpected still when they did a full tour in 2009. And while a few new songs sneaked their way into the setlist of said tour, it was still unexpected when a full length record was announced. It may be the second album 20 years in the making, but let’s be honest: was anyone really waiting 20 years for it? So much the better to be surprised, and well done to Eugene and Frances for keeping things under wraps. Sex With an X exceeds all of the expectations we didn’t know we had.

The Vaselines have succeeded where so many failed; they have remained true to the appeal of their first album while acknowledging that they are older and can’t really get away with singing about cats and riding horses with a wink and a smirk. Yes there is still a bit of innuendo and there are clever plays on words, but rather than sticking strictly to a coquettish aesthetic, there are a few tracks on Sex With an X that are actually kind of sexy.

The intro to 'Whitechapel' echoes 'Jesus Doesn't Want Me For a Sunbeam', and has the same moody tone, but capitalises on the maturity, in particular Frances McKee’s throaty vocals as opposed to her girlish soprano. 'The Devil’s Inside Me' leans lyrically towards the cheek of their previous album, but the bluesy vibe and measured control is a far cry from the chaotic spazz of 20 years ago.

The jangly guitars, sweet vocal harmonies, and suggestive lyrics of the title track is probably the best bridge between the Vaseline’s old work and new. It is also quite likely that the chorus will get stuck in your head for hours at a time. A later alphabetic reference to "Kissing with a K" in 'Give Me Mouth to Mouth' can’t compete with catchy hand claps and riffs of the less cutesy albeit equally coy 'Sex With an X'.

Nostalgia-bashing anthem 'I Hate the 80s' is worthy of end-of-year lists if only for its willingness to fight the current ubiquity of praising the past. For today’s twenty-somethings, the band remind us of the death of John Lennon and the Falklands War, and suggests that day-glo clothing is still a bad idea, even if American Apparel tries to convince us otherwise (and the music wasn’t all wonderful either).

The album’s close, the appropriately titled 'Exit the Vaselines' is the least consistent track on the album, or the band’s output as a whole. The downtempo rhythm and sleepy vocals still have dimension, and the song does slowly build, if only to fade out; it’s more of a curiosity than a flaw. The title itself is either a nod to last year’s remastered and kitted out Enter the Vaselines, or a subtle hint that we shouldn’t expect further recorded material from the band. Whether or not we should expect more, these things have a way of working out.