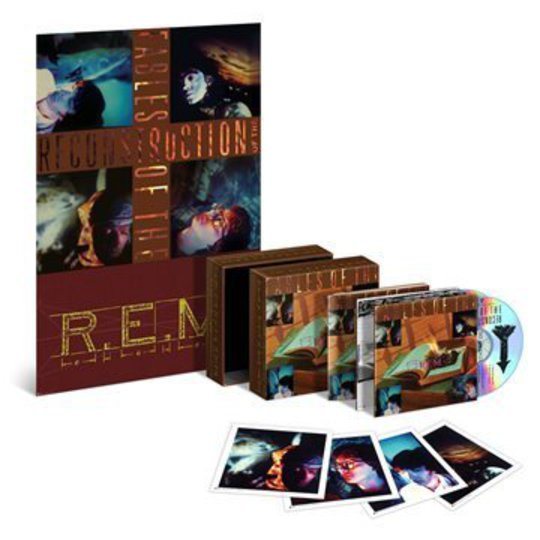 It says something about the perversity of R.E.M. circa 1985 that the still relatively obscure quartet recorded their cracked Southern Gothic masterpiece Fables of the Reconstruction in what was, to all intents and purposes, the exact opposite of the environment that inspired the songs. The band traded their balmy Athens, Georgia for a dreary London winter, in order to that they might record their third album with veteran British folk producer Joe Boyd. Cold, broke, and allegedly subsisting on an all-potato diet, they had a thoroughly miserable time.

Whether or not this affected the songs is open to debate: Boyd’s mix is notoriously dense, the music harsh and elliptical, Michael Stipe sounding not a little mad. But then as The Athens Demos - the very worthwhile second disc on this reissue - attests, the tracks were hardly a barrel of laughs in (though it is notable that the more upbeat ‘Bandwagon’ and ‘Hyena’ didn’t make the final cut).

In any case, despite playing host to ‘Driver 8’, frequently cited as the quintessential REM song, Fables of the Reconstruction tends to get a worse rap than the rest of the band’s early catalogue. The atrocious artwork has a lot to answer for, but a lot of the blame lies with the band themselves, as having had such a terrible time recording the thing, they decided it wasn’t very good and said as much during interviews (about the most upbeat comment at the time was Stipe’s infamous non sequitur that it sounded like "two oranges being nailed together."). It wasn't a big deal: they simply ploughed onwards and forwards, the following year’s Lifes Rich Pageant being everything its predecessor wasn’t - loud, direct, sunny, with a lead single that didn’t confuse everybody. The band have since admitted these are some pretty good songs, and this remaster – a game attempt to demurk an exceptionally murky record – ought to open this wonderful, but very ‘difficult’ record up to more general reappraisal.

Even more so than Murmur, Fables... is a very Southern States album. For starters there the title*, a reference to the Reconstruction era. Why? Dunno, but certainly the unsettled chaos of the South’s middle past gels with the record’s tone. As for the ‘fables’, you need look no further than the lyrics, which offer up a barely decipherable but hugely evocative trawl through the lives and stories of the Georgian old folks Stipe was apparently fascinated with at the time. And finally, the thing that really leaves the imprint of the Peach State on Fables... is Stipe’s vocal, which is as richly, absurdly Southern as it would ever be, from the gnarled country bumpkin-isms of ‘Can’t Get There From Here’, through to the mannered country-singer sobbing of ‘Wendell Gee’ and the gentle folk wisdom of ‘Green Grow the Rushes’.

That there is something ‘up’ is apparent from the get go, opener ‘Feeling Gravity’s Pull’ screeching in on a nerve-shredding three note guitar riff. Its presence is a constant shock, like having a steady stream of shrapnel pulled out of you, while to the side a discombobulated Stipe muttering about “a Man Ray kind of sky”. Towards the end harsh, imperial strings join the fray: the whole thing is trippy bordering on psychotic, as if Stipe’s narrator is cracking up and hallucinating under the sheer weight of being alive. It's one of the most awesomely unsettling songs in the indie-rock canon.

‘Maps and Legends’ and ‘Driver 8’ are the two most famous tracks on the album, the most straightforward, and the most written about, and I don’t really have a lot to add – if you’ve not heard them before, click on the links above and you will indubitably ‘get it’. Thematically, though, it is worth noting that ‘Maps and Legends’ is about one of Stipe’s oldtimers, the outsider folk artist Howard Finster, while ‘Driver 8’s repeat line “Driver 8 take a break, we’ve been on this shift too long” offers another vision of sensory failure a la ‘Feeling Gravity’s Pull’.

Explaining exactly what ‘Life and How to Live It’ is about in detail would push my word count through the roof, but all you really need to know is that it was about an exceptionally strange chap called Brivs Mekis, who wrote a book called ‘Life and How to Live It’. There is something beautiful but ultimately rather disturbing about the sheer passion with which Stipe mumblingly hurls himself into this man’s life – “Raise the walls and shout its flaws, a carpenter should rest/So that when you tire of one side the other serves you best” – it’s the poetry of madness. The vocal is matched by quite possibly the finest guitar line Peter Buck ever wrote and it sounds amazing on this remaster, pure and sparkling as a trickle of snowmelt, tentatively growing into a pure, crystal cascade.

After that, things get weird. The only straightforward song is the heartstoppingly lovely ‘Green Grow the Rushes’, a soft, sorrowful piece about exploitation of Latin American guest workers that prefigures the politicisation of the next three REM albums (“The grasses that hide the greenback/The amber waves of gain”). Elsewhere we have ‘Old Man Kensey’, the nightmarish tale of a crazed old guy who aspires to be “a sign painter... a clown on TV... a goalie... dog catcher”; the ridiculously OTT rural funk of ‘Can’t Get There From Here’; the listless, lonely drizzle of ‘Kohoutek’; the harsh, distressed roar of ‘Auctioneer (Another Engine)’; the paranoid but strangely reassuring old time wisdom of ‘Good Advices’; and ‘Wendell Gee’, a melodramatic lullaby about the death of an upstanding figure who “was reared to give respect/But somewhere down the line chose/To whistle as the wind blows”.

Assuming the role of lyricist-as-voyeur, Stipe paints his South as a rusting, haunted place full of disturbing visions of lonely old crackpots at the fringes of sanity. But he tackles it with absolute sympathy and furthermore, he doesn’t exclude himself from the number of the broken weirdos: barely discernible through the mournful grey downpour of ‘Kohoutek’ is the utterly broken-sounding line “Michael built a bridge... Michael tore it down”. The result is staggering tangible.

It adds up to a dark, dissonant record, but awkward and nerve-wracking as Fables... may be, it's strangely un-depressing. The world it paints is more magical that social realist, a nocturnal fantasy kingdom existing independently of the physical Georgia. Perhaps explains why the band could journey into the place so convincingly whilst shivering away in London exile. There are plenty who won’t like the creeping, hook-free weirdness that lies beyond the first four songs, but the latter parts of the record – the unhinged belly laugh of ‘Can’t Get There From Here’, the bottomless pain part-concealed by 'Kohoutek’s strange shapelessness - reward patience, landmarks in a universe 40-minutes long, but infinitely detailed. This remaster opens it up a little more, and certainly does full justice to some of the best crfted harmonies and guitar lines in R.E.M.’s catalogue. At the same time this is, at heart, a very obtuse folk-rock album and nothing’s going to change that.

Birthed in a haunted old South, forged in a drab England, paranoid, sensual, nonsensical and true, Fables... was undeniably something of a diversion on the route to indie rock stardom. Yet for many fans – still a minority, I’ll be the first to admit - this moon-touched night walk exceeds nigh on all the records that followed.