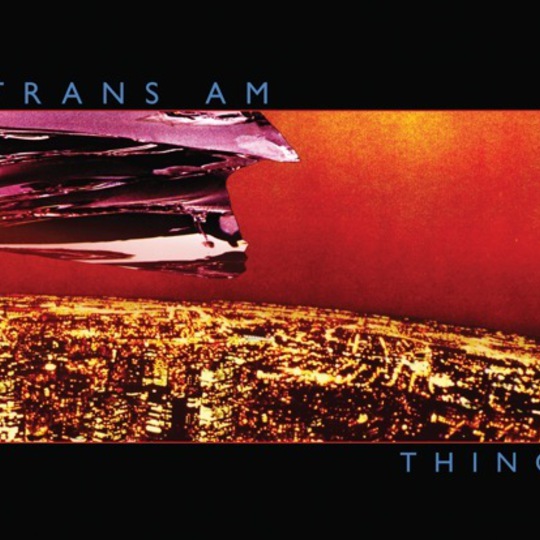 With 20 years worth of experience under their belts, Trans Am don't exactly fall into the novice bracket. Yet, in some circles, they're still something of an unknown quantity, a mind-boggling state of affairs considering they predate obvious contemporaries such as To Rococo Rot, UNKLE and Battles by several years. It goes without saying that they also possess one of the most extensive, and consistent back catalogues of any artist in recent years. They're not only cited as an influence by all of the aforementioned, but also numerous incumbents of guitar-based scenes have thrown many a plaudit their way, Tool and The Bronx being just two that spring to mind.

Having managed to retain the same three members since their conception two decades ago, Trans Am have continued to push boundaries with their electronic excursions. Indeed, many critics have attempted to stamp some kind of genre classification on their collective foreheads, and failed miserably every time. If the 12 pieces of music that make up Thing are anything to go by, that would be a thankless task for even the most seasoned of hacks.

It's perhaps ironic considering the two-year hiatus that took place between the making of Thing and release of predecessor Sex Change that there were fears Trans Am wouldn't make another record at all. Last year's live compilation What Day Is It Tonight? seemed to herald the band's finale, despite the fact Nathan Means had intimated during that period that a new record was on its way.

Oddly enough, Thing, their ninth studio album, could in many ways be considered their most diverse collection to date. Initially earmarked as a soundtrack venture for a Hollywood blockbuster, Thing bears all the hallmarks of an ingeniously constructed score James Horner or Javier Naverette would be proud of. Two thirds of the way in, 'Arcadia' repeats its name subliminally over a hypnotic dance beat that is half 'Robocop' with a slight twist of 'Primer' thrown in for good measure. If anything here were made for such an excursion into celluloid accompaniment these three minutes fit the bill succinctly.

However, that only tells a small part of the Thing story. While the decelerated take-off of opener 'Please Wait' and block-rocking electronica of 'Black Matter' oddly recalls Pendulum, the aggressive perfection of 'Naked Singularity' could hold court quite easily with the very best of Warp Records most revered. Nevertheless, Trans Am aren't ones for playing it safe or settling into a comfort zone. Instead, they toy with the heavy artillery of dub ('Bad Vibes'), progressive ambience ('Interstellar Drift') and introspective orchestral diversions ('Space Dock'), each one bringing its own fresh perspective into an already captivating mix of the strangely familiar yet largely unexpected.

Better still, and undoubtedly Thing's main highlights, are the record's two main focal points 'Heaven's Gate' and 'Apparent Horizon'. Where the latter takes on a more acrobatic looped workout like early Kraftwerk or Daft Punk at their most experimental, the former erupts amidst a heavy melange of noisy guitars and squalid breaks that is totally off kilter with anything else on the record, therefore fully cementing Trans Am's reputation as one of the most unique outfits of their generation.

Ultimately Thing is an album that exceeds expectations, not to mention revealing new trajectories with every subsequent listen. Whether a heavy indulger or casual fan of electronically based music, it's hard to envisage a better record than Thing emerging from any of its sub-genres this year. A bold statement for sure, but one that will ring true when December 31st's bells bring 2010 to a close.