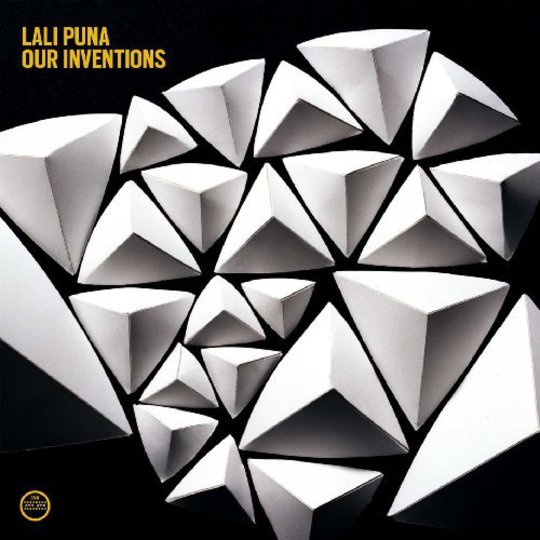 We’re past making excuses for electronica now, right? The novelty of creating music without traditional instruments has worn off, so we demand sonic invention, excellent writing or emotional punch from musicians choosing laptops over guitars. On this basis: Epic fail, Lali Puna.

Six years ago the Weilheim group with incestuous links to The Notwist and Tied & Tickled Trio released the surprisingly guitar-driven Faking The Books. It saw them transcend their previous insular, four-track-at-home aesthetic to create something strikingly original. The guitars are now gone and without them we’re lost in a sea of unmemorable electronic parts and a lack of light and shade.

Instrumental ‘Future Tense’ doesn’t want for constituent parts, cycling through a variety of serviceable drum patterns and wacky effects. Everything good about the song is neutered by the steadfastly dull and predictable dominant melodic lines, a sighing organ and occasional crystalline chimes re-enforcing a non-existent point. We’re in Pleasantville, population: four very bored people, all on a lot of Valium.

Singer Valerie Trebeljahr is gently vocodered on ‘Hostile To Me’ while several precision layers of bulk-bought prettiness chirp away slowly in the background. You’d think it would make for a pleasing listen but I found it wearingly dull. It’s music to glibly shake your head from side-to-side to, with a dumb sarcastic smile on your face.

Trebeljahr is a more versatile vocalist than her monotone on this record suggests. She reaches for an upper register you’d forgotten she had on ‘Safe Tomorrow’ and it’s blessed relief to escape the comfort zone she’s sleeping in for most of the album. The dominant lyrical themes are vague unease at the speed of modern life and an implicit mistrust of technological advancement. Hi, OK Computer. Hi, 13 years ago.

In ‘Everything Is Always’ Trebeljahr’s voice sounds like it’s spiralling round the inside of a fishbowl. Cool, but it’s hampered by the ESL inelegance of moderately pissed-off-at-the-world lyrics like “These days are falling, imagine what to come / watch them fighting, watch them losing, watch them without heart”. The song climaxes with a firm assault of melodic waves but they’re not allowed to reach a groove, snuffed out before they might become unpleasant. On ‘Our Inventions’ Trebeljahr sings:

The birds in the trees

What a sweet, sweet world

We would end the painting

And it would show a bright, bright day

She’s presumably referencing the sporadic reports of birds singing mobile phone ringtones, and among the sweet-sweet and bright-bright there’s a novel suggestion that this is oddly beautiful, rather than further evidence for the hidden menace of 21st century life. But no birds are going to be singing this song’s under-nourished melodies. I think I can safely speak for all avian life by saying birds prefer a good tune to refined swelling organ lines.

Final song ‘Out There’ is a collaboration with the Yellow Magic Orchestra's Yukihiro Takahashi and there’s finally a bit more going on, with an insistent one note exercise-speed heartbeat pulse and some subtly glitched drums. It’s one of the album’s highlights but it doesn’t justify the preceding 33 minutes of near-relentless tedium.

The major problem is a lack of drive, an urgency deficiency, no one element or song taking the album by the scruff of the neck. Our Inventions feels terminally lacking in ambition and new ideas and a big step backwards for Lali Puna. The music is safe tweetronica, Trebejahr’s vocals inscrutable like a tasteful wallpaper. You look for album-wide mood in the absence of standout elements, but you’ll find little more than: 'Oh... nice'.