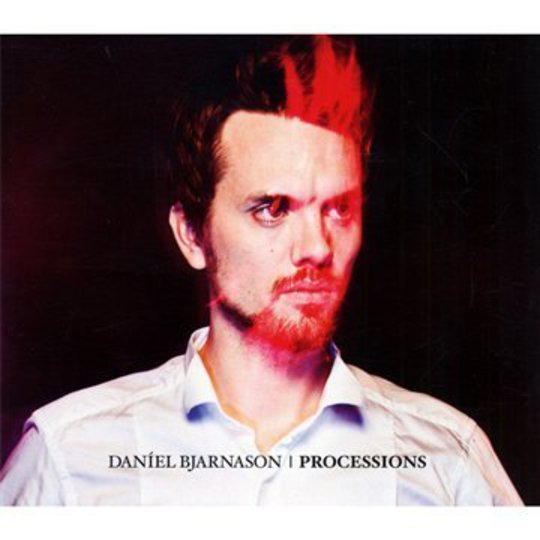 It’s probably something to do with the contemplation required to actually write the notes down on a manuscript, but classical music sometimes has difficulties conjuring up the same sense of spontaneity as rock’n’roll. Epic trembling passions - no problem; wistful elegiac reveries - got ‘em in spades; but you rarely get the impression a composer has just been dumped by his girlfriend and thrown an orchestra around the room in frustration.

However, on parts of Daniel Bjarnason’s Processions it sounds like he’s done exactly that; penning classical music as likely to make you pogo as stroke your chin or start waving flags at the Proms. This 30-year-old Icelandic composer is no stranger to rock, having scored strings for his compatriots Hjaltalin and conducted the London Sinfonietta during their Abbey Road sessions for Sigur Ros. Not that those airy orchestrations really bear much relation to the fire Bjarnason rains down here, on the follow up to 2008’s All Sounds To Silence Come, which was written for and performed by the Isafold Chamber Orchestra Bjarnason co-founded in 2003. Closer comparisons can be found in the artists Bjarnason shares the Bedroom Community label with. However, it's not so much that Icelandic imprint’s other nominally ‘classical’ artists Nico Muhly and Valgeir Sigurdsson as avant-garde electronic practitioner Ben Frost. As with Frost’s last album By The Throat, Processions is often terrifying in its intensity, the moments it relaxes only respites before the pressure makes your eyes bulge again.

The difference is that, where Frost created his deeply unsettling music by feeding samples of black metal bands and howling wolves through banks of electronics, Bjarnason goes for a more traditional ‘classical’ template by employing the Icelandic Symphony Orchestra, alongside soloists such as harpist Katie Buckley, pianist Vikingur Olafsson and cellist Saeunn Thorsteinsdottir. All of whose playing – with the exception of the multi-tracking of the latter’s cello on the ‘Bow To String’ suite – he leaves almost entirely free of post-production frippery.

But if the unwary might assume that such an approach might give this music ‘Air To Breathe’ – as Bjarnason has (possibly ironically) named ‘Bow To String’s third movement – then they’re in for a shock with the opening ‘Sorrow Conquers Happiness’; with Thorsteinsdottir’s cello scurrying through jarring atonal passages which not only knock the breath from your lungs like a blow to the stomach but also establishes Processions’ dominant motif. If the album title suggests a slow and stately progression, the reality is more like a breathless pursuit, the massed instruments inexorably pressing down upon both each other and the listener like a galloping army hoving over the horizon. Even when the pace seems to drop – as on ‘Bow To String’s second movement ‘Blood To Bones’ – it still feels like you’re hiding in an abandoned house, aware that there’s no real escape from what’s roaming outside; sweat prickling as the pitch of the cello now becomes unbearably tense, plucked strings sounding like ominous approaching footfalls.

Second suite ‘Processions’ is – if anything – even more clamorous. Beginning with a thunderclap before the piano and strings are blown away on a nuclear wind for ‘In Medias Res’, ‘Processions’ seems to follow the same route as ‘Bow To String’ with the eerie interlude bridging ‘In Medias Res’ and ‘Spindrift’, before the bombast reaches almost Wagnerian levels on ‘Red-Handed’. Indeed, even though the smoke settles somewhat for the closing ‘Skelja’ it’s still like surveying the aftermath of an earthly cataclysm from the position of someone still panting for air, rather than really being a calming end to proceedings.

Of course, although it might often sound like complete chaos, with Bjarnason unable to keep a lid on the rage that boils within, Processions obviously required a degree of technical virtuosity akin to the ‘death jazz’ of The Thing and Soil And Pimp Sessions it occasionally resembles; that Bjarnason is leading an entire orchestra through this maelstrom even more impressive than a jazz trio soloing around each other. That, and the fact that this so-called ‘classical’ music makes even the most aggressive members of the jazz, electronic or metal avant-garde sound about as scary as Cliff Richard.