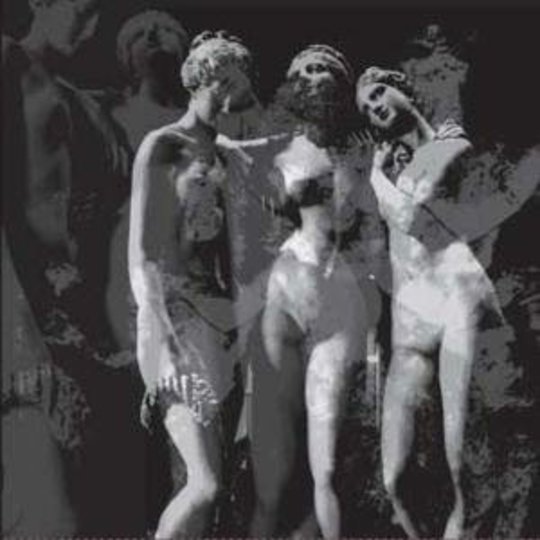 Yrsel are a duo: C-J Larsgarden, a Swede who makes hyper-creepy ambient electronica as Ondo, and a Frenchman named Julian Louvet who is known (to keyboard-shackled CDR hoarders) as The Austrasian Goat, under which name he makes a gastropod-slow mixture of black metal and sludgy doom. It would be reductive in the extreme to suggest that Requiem For The Three Kharites, their first recording together, is a simple crossbreeding of Ondo and The Austrasian Goat. It is, however, reasonable to suggest that, to the extent these things are at all measurable, roughly equal amounts of each project can be heard in these three lengthy pieces (with the arguable exception of the final one). Matters are pretty much exclusively handled by guitar and electronics throughout the 50-minute duration, more often than not drone-based and intermittently swamped by such unruly fuzzstorms it’s hard to tell which instrument is contributing what.

Any acolytes of Greek mythology may have been piqued by the album title, and perhaps even figured out that this is (in its creators’ heads, at least) a concept album. The Kharites, or Charites, were three goddesses of nature, and positive human traits in general: charm, beauty, creativity and so forth. This could be seen as a curveball, insofar as it’s feasible to take a vibe of deep negativity away from this album – if only based on the fact that it’s slow, atonal and distorted. Perhaps the lesson is that thoughts and emotions, as expressed through wordless sonics, are less tangible than we sometimes think, and that ‘happy’ or ‘sad’-sounding music is a cultural construct. Another nail in the now extremely naily coffin of taking music writing seriously, then, but let’s press on anyway, what with Requiem... being a good album that’s worth your time.

‘The Last Visions Of Aglaea’ is the first of the three tracks, and the one most rooted in the primal thrill of overdriven rock guitar and leaking distortion. In other words, it leads you to believe Requiem... borrows more from Sunn 0))) than actually ends up being the case. Some ten and a half minutes in, someone – history does not record who – contributes some deranged, Gollum-ish vocals that vanish almost as swiftly as they appear. Three minutes later the first riff arrives, but even this is a deep, metronomic toll as opposed to anything... virtuosic.

Track two, ‘The Tears Of Euphrosyne’, is all about the slow build: low-key drones for the first few minutes swell to a grandiose peak of analogue (-sounding?) noise, dips back into haunting hum and reverbed whispers before things come to a head in roughly chord-based shapes. As with the opening track, it utilises ultra-reduced doom riffage – more akin to Earth than Sunn 0))), if we’re splitting hairs – albeit in a way that doesn’t define or dominate the track. We close with ‘Thaleia’s Neurasthenia’, which hams up the place in its Hammer Horror hat: all bluntly struck piano, windy creakage and bass tones for yer solar plexus, it’s the only time one of the members’ projects (Ondo) seems to control the sound more than the other. Again, it’s impressively controlled and measured, a recent comparison point being Half Makeshift – a chap from Maryland who stopped making music a couple of years back because he believed the world was going to end in 2011.

Requiem For The Three Kharites exploits textures and atmospheres that have a clear lineage in black metal. Yet compared to some of the recent manglers with a foot each in BM and droney noise (Gnaw Their Tongues; Wold; The Austrasian Goat themselves), Yrsel scarcely attempt consuming, sadistic punishment. They don’t so much loathe the listener, you feel, as wish to disquiet and unsettle him, and in this respect they compare favourably to Coil or Nurse With Wound – outfits that cast a pretty big shadow over any bands attempting this kind of magickal ambience. Packaged in one of those sweet-like-tooth decay foldout card sleeves that a lot of Aurora Borealis releases come in, this is limited to 500 copies as it stands, so if everyone who reads this review buys one, that will mean that this CD will be largely owned by Drowned In Sound readers, which would be pretty funny. I might have to include people who click on it for five seconds and then decide they can’t be arsed, and spambots, but still.