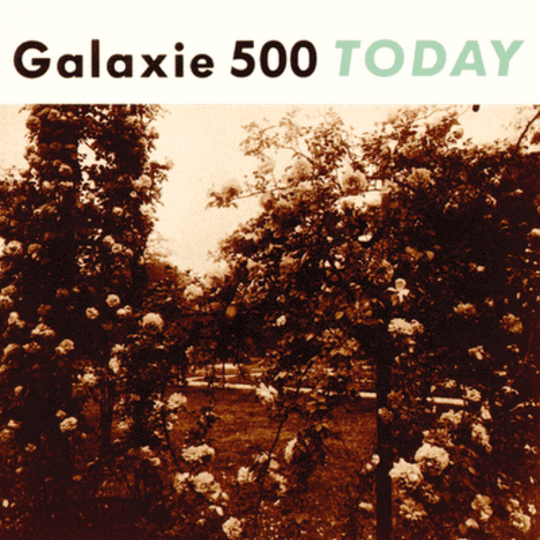 In the late Eighties auto tune was a pop producer’s fantasy, still ten years away from inception. Back then, when people used the term ‘indie’, it represented a jangly guitar, lo-fi, no frills, grounded production technique. This trilogy of albums represents far more than Domino doing a dirty flirt with their recently acquired back catalogue baggage. These albums are, in fact, symbolic cultural artifacts that remind us how far independent music has (d)evolved. The music captured here is earthy, warm and full of unpredictable imperfections, rewarding for the most diligent of listeners and soothing for those who like music as wallpaper.

Contained within this full set of Galaxie 500’s outputtings is a force stronger than you might realise. Sure, the original Harvard via New York band of Dean Wareham (guitarist/singer), Damon Krukowski (drummer) and Naomi Yang (bassist), no longer exists as that line up, but what they have gone on to achieve, and the other bands and artists they have influenced - Low, Liz Phair and Sonic Youth, to name a few - further cements their relevance in musical history. Back then John Peel got in on the act and Rough Trade signed them up, for their last album, before going bankrupt. After that Dean went on to form dream popping band Luna, more recently remerging under the recording name Dean and Britta, who floated into the peaceful shoegaze revival on Rob da Bank’s recent Sci Fi Lo Fi Vol. 3 compilation. And in case one couple wasn’t enough, Damon and Naomi are also doing their own softcore folk rock thing too and are about to embark on a 2010 Euro tour.

Each album this time round comes packaged with a cd of extras - the record itself obviously isn’t enough in these days of hyper digitalism. First album Today comes with a second cd, showcasing an array of demos and out takes from all the years the band recorded together. Second set On Fire, the one Xiu Xiu references in the song ‘Dr Troll’, comes with a much-maligned John Peel sessions disc. Thirdly, the Ornette Coleman inspired swansong This is Our Music sits comfortably with live recordings from their last ever European gig in Copenhagen.

‘Flowers’ opens for the Galaxie’s debut album Today and it reassembles their trademark sound that resides somewhere between Velvet Underground and a laidback REM. You get gentle off beat drums rattling away in the background, the hypnotic day glow of bass, contrasted with the brightness of the guitar and sedate tones of Wareham’s voice. Later tracks build up the sound even more, with Wareham layering his vocals with simple, but pleasing to the ear harmonies on tracks like ‘Pictures’ and the shockingly upbeat (well, for Galaxie 500) ‘Parking Lot’. From this album it soon becomes clear that Galaxie 500 was not a vocal led project by any means; in fact on the Jonathan Richman cover ‘Don’t Let Our Youth Go To Waste’, the first third of the song is purely a meditative, barren instrumental soundscape and the last third a guitar solo freak out. Standout track is ‘Tugboat’ and contains themes of yearning and dreaming that are familiar within shoegaze. Wareham sings: "It’s a place I’d like to be, a place where I’d be happy." And that seems to be what Wareham is creating on this album, a musical haven for himself and cohorts to hang out in and take it easy. (8)

On Fire starts with ‘Blue Thunder’, a song with the spookiness of Twin Peaks emanating from the guitar part and Wareham’s melancholy falsetto vocals that continue into the faded love song of ‘Tell Me’ and then TV gone wild of ‘Snowstorm’.‘Strange’ lifts the energy levels for this album and Wareham starts posing faintly agitated questions: "Why's everybody acting funny? Why's everybody look so strange? Why's everybody look so pretty? What do I want with all these things?". These questions never seem to get answered, adding to the enigmatic air. And there are a few surprises on this album with ‘Decomposing Tress’ adding a soulful tenor sax, (cheap) mouth organ on ‘Leave the Planet’ and on album closer ‘Isn’t it a Pity’ that reflects on the fragility of relationships. This album represents Galaxie 500 beginning to find their prime. (8)

Lastly, in this spate of reissues, is This is Our Music. Here the band ramp up their game. The album begins with ‘Fourth of July’ and feedback that slams into a bittersweet melody, intersected with brief spoken word sections from Wareham, talking about getting drunk in New York and an ear-pleasing rhyming couplet chorus of "Maybe I should just change my style, but I feel alright when you smile". For a moment they sound like Sonic Youth. The next track ‘Hearing Voices’ shows off more of their auditory richness, including backing vocals and hand percussion. And then ‘Spook’ takes a super slow turn for the weird with Wareham singing about an extra eyelid. Then ‘Way Up High’ takes a different twist with bits of (cheap) flute and a cozy swing on the drums, soon followed by Yang stepping up to the mic on Yoko Ono cover ‘Listen, the Snow is Falling’ - she takes lead vocals for the first time, indicating future aspirations. This is Galaxie 500 at their peak, with a smattering of pop sensibility and allowance for each band member to contribute more to the project. Here are signs that they could have gone on to greatness, if they’d wanted to. (9)

Each album here is an improvement on the last, each member and the band progress on their musical journey and yes they do stretch out their formula a little too thinly at times, but there are some ornamental delights that are worth taking in.