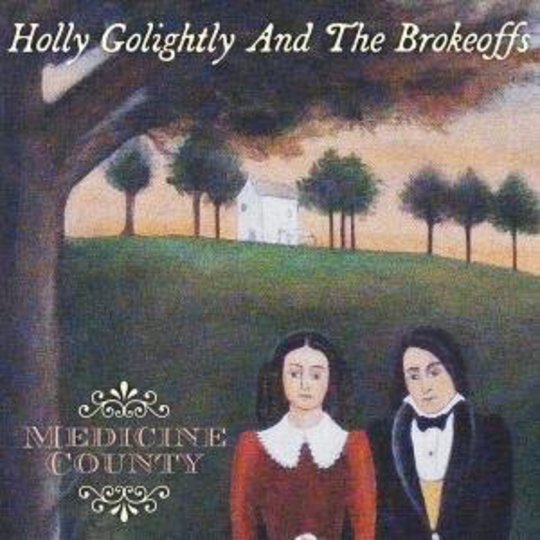 There’s a chance that Deadwood creator, writer, executive producer and all round driving force David Milch is still pretty sore after not being able to complete his vision for the show and paint a final desperate portrait of Al Swearengen riding the last ragged rail of his life. Personally I think that the sight of Swearengen mechanically scrubbing up the guts and grease of an innocent young woman sacrificed because she had the wrong hair and the wrong face in the wrong whorehouse pretty much summed up everything about his character and the series in general. But some left it wanting more, and you could imagine it might’ve been the same for Milch. But what he should really be bothered about it the fact that he never got the chance to have a track from Holly Golightly & The Brokeoffs playing over the end credits, their first record being released a year after the show was left on the floor coughing up sawdust on its encrusted long johns. Listening to Medicine County and the sound of modern performers authentically working through the structures of old American myth with a playful, knowing glint in the eye, it comes across like it could’ve been the perfect match.

Album opener ‘Forget It’ creeps and stalks on its way with sinister, red-light organ, rattling percussion and vocals so loaded with threat and menace that the opening line, "Hold me closer" could only ever sound like the beginning of a love story if you're prepared for it to get blood on its hands. The simmering tension builds as Golightly talks her lover straight ("When you steal a heart that’s true/ be certain that you want it too") until the music and vocals stab out the final assured warning, "Mine can’t be relied upon, to forget". With The Brokeoffs consisting of just one man, Lawyer Dave, this pairing recalls similar contemporary male/female partnerships investigating different shades of Americana, like Mark Lanagan and Isobel Campbell or M. Ward and Zooey Deschanel. But Campbell and Lanagan lack the mischievousness shown here, and if Deschanel and Ward are the good time, tits and teeth kids from Glee, then Golightly and Lawyer Dave are Winonna Ryder and Christian Slater ready sneak a grenade into their lockers. The mournful ‘Dearly Departed’ is a highlight; a slow, sparse lament for a departed lover, it fills the space like a tumescent cloud before the rain, ready to collapse in on itself and release all that’s built up, but somehow holding back for a little longer.

Talking of the album, Golightly has said, "We're so insular in how we work and wherever we live, we're not exposed to an awful lot of what's going on. We could be anywhere in the world, really. We live in our little bubble." Like the town of Deadwood, the record itself is mostly it’s own world, hermetically sealed off from all outside influence and making it’s own rules as it goes along, with anyone from the outside instantly looked over with a distrustful eye because their world has shown more than any other what people are really capable of. Like the three series of Deadwood, you could spend time picking between each of the three Brokeoff’s releases, but they should instead be seen as a single evocative triptych, although one that would nonetheless leave enthusiasm for another blood stained instalment.