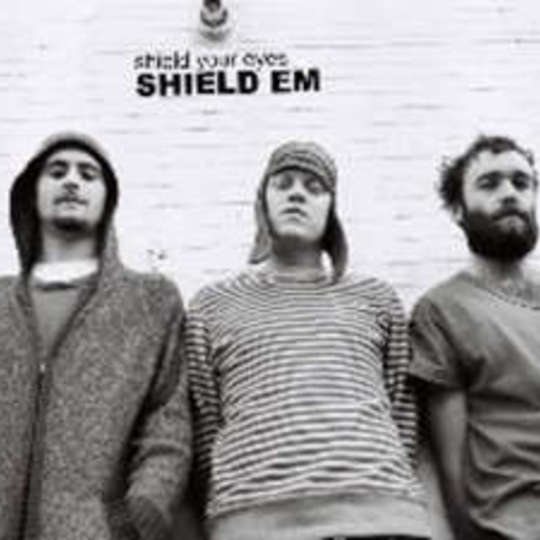 A couple of weeks ago I was flicking through television channels and happened upon an edition of WWE Raw. Upon spotting the oh so familiar mix of spandex, sweat and sports entertainment I lingered for a moment, appeasing the gleeful 12 year old within. Suddenly something caught my eye; it wasn’t the latent homoeroticism; rather, it was one of the participants describing themselves as being straight edge and therefore “better than you”. I did a double take. I noticed the X’d up hands. I thought to myself, this CM Punk fellow couldn’t really be edge; it’s definitely just a gimmick, just like everything in wrestling. An odd choice of gimmick granted, but a gimmick nonetheless. A quick check of Google reveals that, yes he is indeed edge. He is tru punx. A similar thing happened to me with Shield Your Eyes.

I always associated them with the current glut of underground post-hardcore/indie rock bands that litter Britain’s toilet circuit; bands whose records and songs are so well regarded yet fail to register with me. Upon listening to Shield Em for the first time I can’t say I was pleasantly surprised. Rather, I was shocked. Turns out I’d been unfairly judging Shield Your Eyes by the standards of their peers, rather than their own merits. Shield Em is explosive, interesting, engaging. It’s things that the afore-referenced bands rarely manage.

From the get go Shield Em grabs your attention. Right out of the gate, everything explodes into a mess of jagged guitar riffs and off kilter drumming. Parts twist and turn, go off at tangents, head to unexpected places, stop, start, then stop again. The clattering drums and spiky guitar work, underpinned by a jazzy, walking the dog approach to bass playing sets Shield Your Eyes somewhere between Off Minor and Paper Cut Out. Their approach to song writing seems to be playing one part until bored of it. Hence some riffs will only appear for a few bars and then be thrown away, whilst others, notably the one on closing track ‘Sandy’, go on for around six minutes. The problem with this is that a lot of songs merge into one long every changing, ever evolving riff. It’s not a bad thing if you’re approaching the record as a listener, but it makes it tough to isolate songs as a reviewer. Let me put it this way – I’ve had the opening part of ‘Oranges’ stuck in my head for days, along with ‘Ultra Soul’, and I was always assumed they were one long song. It’s only after checking the tracklisting that I discovered the truth. It’s similar to the principal that Lightning Bolt employ in their music; the idea of making riffs the focus of your songs, of constantly making small changes and throwing in odd curve balls here and there in order to keep things flowing. Riff after riff after riff.

What sets Shield Your Eyes apart from their peers is their ability to keep things interesting. Whilst a lot of bands at the minute operate within the same ballpark, Shield Em towers above competitors. It somehow manages to mix post-hardcore with math rock, jazz and a bit of blues to great affect. I salute Shield Your Eyes for challenging my prejudices and making me realise that not every band on Britain’s underground toilet circuit is shit; just most of them.