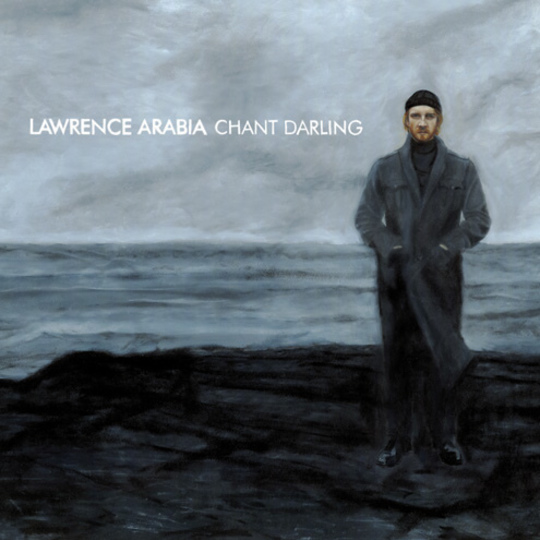 Before listening to the new record from Lawrence Arabia – his first to be released in the UK – I had already become quite enamoured with the lead single, ‘Beautiful Young Crew’. So it was a more than pleasant surprise to find that at least two songs on the album cast a long shadow over it in terms of quality. ‘Beautiful Young Crew’ is a choral narrative of ego and isolation, and the wafer-thin distinction between friends and enemies, but the magic of Lawrence Arabia, AKA New Zealander James Milne, is to take these sojourns into the unfortunate side of life and make them sound beautiful. In this respect, although there are better songs on Chant Darling, ‘Beautiful Young Crew’ is a fine choice for lead single; for the uninitiated it can serve as a key-note address of the delights to be found on its parent album.

Chant Darling contains hints of lots of different artists, but not in the sense that Milne is trading off better-established reputations, more that he knows his way around a hazy melody and a self-deprecating lyric to such a degree that he recalls artists who have already carved out their place in music-lovers hearts. A less obtuse Andrew Bird can be heard on the opening track ‘Look Like a Fool’, especially in its string-laden ending. Within the same song however, the tendency ala Beck or Jonathan Richman to refuse to take life as seriously as fools will demand comes shining through.

Milne has a wonderful gift for constructing a pop song; ‘Look Like a Fool’ is a swooning delight, all baroque piano and archetypal troubadour stylings, but any turns towards overwrought drama are gleefully punctured. Perhaps because New Zealand has more sunshine than the average European miserablist will ever see, perhaps something else, but whatever the reason, he clearly could write the kind of song which rips your still-beating heart from its chest and simultaneously shows the futility of love. But instead he chooses to wrap the clothes of that song around tales of being goofy and needing so much dutch courage to talk to a girl you turn into a dutch moron. “I’m on the ground girl I’m thrashing round, its easy to see what his display is for, what you mean to me, now their dragging me away in an unlicensed minicab, and they’re calling my best friend’s dad” is a genius coda, one that tugs the funny-bone rather than the heartstrings.

Chant Darling's other outstanding moment is ‘Apple Pie Bed’, which features the same meandering washes of psych guitars and Beach Boys-vocal harmonising (or is Panda Bear the reference these days?) as ‘Look Like a Fool’, although this time we are in more straight-up jangly indie territory. Once again LA’s knack for a bridge and chorus which transport your ears high above the clouds will have you doing some serious damage to the repeat button on your stereo.

The fabulous standard of ‘Apple Pie Bed’ and ‘Look Like a Fool’ isn't present throughout the entire album; songs like ‘The Crew of The Commodore’ feel slightly underwhelming by comparison, but realistically their biggest fault is keeping the company of unfeasibly good psychedelic pop songs. There is enough in the moments which don’t quite astound to suggest that Lawrence Arabia is on the cusp of making a real classic of a record, until that time arrives, go check out ‘Beautiful Young Crew’ and drool at the prospect of an album which tops it not once but twice.