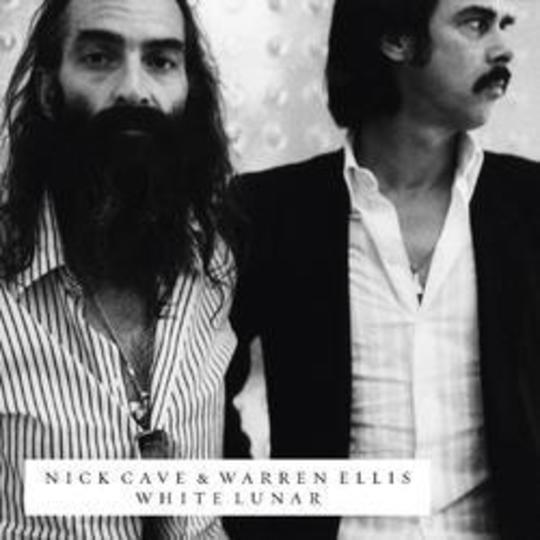 As long-term working partnerships go, Nick Cave and Warren Ellis have had a particularly fruitful one – 15 years is a long time to go on making music as frequently brilliant as the material that emerges from their prolific studio. More impressively, their output is showing no outward indication of the ravages of time. There’s certainly nary a sign of middle aged brewers’ droop from Messrs. Cave and Ellis on the particularly filthy latest record from the Bad Seeds (“Mr. Sandman the inseminator/He opens her up like a love letter and enters her dreams”, anyone?), not to mention Grinderman’s furious thrusts at anything moving within eyeshot.

Still, they’ve not aged entirely disgracefully. White Lunar gathers a cross-section of their scores for film and theatre, bringing the grace and restraint Ellis has made his hallmark with Dirty Three together with Cave’s sublime ear for the darker and more maudlin aspects of humanity. With the benefit of hindsight, it’s unsurprising that the pair’s soundtracks to modern-day westerns The Proposition and The Assassination of Jesse James by the Coward Robert Ford - gathered together on the first disc - are perfectly-pitched. From the earliest days of his solo career Cave displayed an almost pathological fascination with the evangelical fervour of the Bible belt – The Firstborn Is Dead frequently touched on the seedier underbelly of its God-fearin’ sheen of innocence, and his first novel And The Ass Saw The Angel was a convincing and oddly touching slice of Southern gothic.

That having been said, it’s striking how fully-realised and gut-wrenchingly powerful the score to Jesse James remains when listened to outside of the film’s context. Opener ‘Song For Jesse’ is a glorious piece of chiming minimalism that seems to last far longer than its two-and-a-half-minute runtime would suggest, its swift arpeggios immediately conjuring up the film’s nocturnal opening sequence. ‘What Must Be Done’ finds Ellis’ violin in uncharacteristically smooth and soothing form over Cave’s broken chords, and the melancholy dynamics of ‘Song For Bob’ echo the eponymous protagonist’s meteoric rise to fame and swift, graceless fall.

By way of contrast, The Proposition’s dynamics are far closer to Ellis’ day job. His trademark, roughly scrawled violin calligraphy is etched indelibly across its surface, lending ‘The Proposition No. 1’ and ‘Martha’s Dream’ an exquisite darkness and tension only resolved during the latter’s hypnotic outro, where from nowhere the instantly recognisable strains of the Dirty Three’s ‘Some Summers They Drop Like Flies’ suddenly fill the air. In keeping with the film’s more feral nature, The Proposition’s soundtrack is possessed of a barely restrained air of violence, lent sudden credence during the squalling feedback of ‘The Rider No. 2’.

If the first disc elicits a more obvious emotional response, White Lunar’s second half is more obtuse, drenched in a fine white mist and audibly more difficult to interpret in the absence of a visual counterpart. Despite its more otherworldly abstractions, it succeeds as no less rewarding than the first, yielding its riches in a slower but equally fulfilling way. Their soundtrack to The Girls of Phnom Penh is appropriately sombre in tone for a documentary about the Cambodian sex trade, but the different setting has allowed the duo to explore less dusty surrounds. Less Wild West than Far East, ‘Srey Leak’ and ‘Rom’ are thick and humid, touched with subtly differing melodic modalities that creep from their claustrophobic surrounds.

The second disc ultimately feels more like a soundtrack collection than the first, which stands up remarkably well to entirely independent listening. Nonetheless, the sketches that make up the soundtrack to The English Surgeon recall Dirty Three’s last album Cinder in their economy of form, and the four pieces taken from the duo’s doubtlessly massive archive make yet more explicit the connecting themes that link Ellis’ piercing instrumental history with Cave’s ear for the darker side of human nature. In the hands of many other artists, White Lunar would be a career-high achievement. It’s testament to Cave and Ellis’ ongoing relevance that it can be released with relatively minimal fanfare – presumably with the knowledge that it’s merely the tip of a mighty, mighty iceberg.