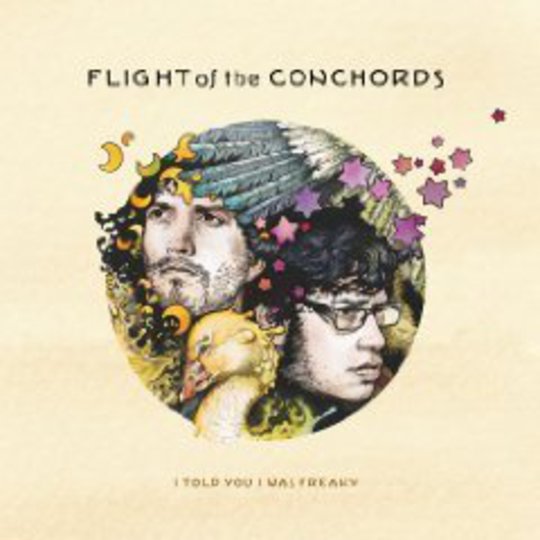 So much has been written about the second series of Flight Of The Conchords’ TV show and its apparent failure in comparison to the first that it’s a wonder the duo weren’t tempted to put a disclaimer on the DVD release. ‘Sorry, does not contain 'Bowie In Space' or 'Business Time', but still contains jokes. Please buy.’

However, much like the criticisms levelled at an indie band when they ‘sell out’ by having a hit and getting their record in Tesco, the 'failure' of the Conchords tends to exist in the minds of those devoted followers who’ve been there from the start, and who now find the higher profile and rip off Pot Noodle ads a little disconcerting. The second series of the show found a bigger audience, and while the concept might not have seemed as original, it at least maintained the Conchords’ singularly strange universe.

A similar tale can be told around I Told You I Was Freaky, Jemaine Clement and Bret Mackenzie’s second album, made up of songs that feature in the second series. Initially, this collection of 13 tracks can seem weak in comparison to those that featured on the Flight Of The Conchords LP, and there’s no arguing that a sense of tiredness hangs over some moments, such as the title track, which seems happy to wallow in quirky imagery and a moon/spoon approach to rhyming.

Thankfully, those initial fears don’t hang around forever though. Much like the way that the sheer idiotic brilliance of 'Sex On Fire' turned everyone and their mother onto Kings Of Leon, some of the most directly infectious Flight Of The Conchords songs hang around here. 'Sugar Lumps', 'You Don’t Have To Be A Prostitute' and 'Too Many Dicks (On The Dance Floor)' are all one-joke songs where you don’t even need to hear the track to get the punchline, but that doesn’t stop them being both stupidly catchy and sniggeringly funny. Taking the mick out of Black Eyed Peas is hardly difficult, but there’s a buffooning charm and imaginative approach to Jemaine and Bret’s wordplay that means they get away with it.

I Told You I Was Freaky is certainly helped by the fact that it contains two of the duo’s finest creations to date. 'Carol Brown', ostensibly a riff on '50 Ways To Leave Your Lover', turns from a jaunty pop ditty over which Jemaine lists the ways he’s been dumped into something much more beautiful as a choir of ex-girlfriends joins in the chorus to add some celestial harmonies.

Also excellent is the sublimely ridiculous 'We’re Both In Love With A Sexy Lady', a song that could have been a lazy parody of R Kelly and Usher’s 'Same Girl'. Instead, thanks to the surreal scenario in which Bret and Jemaine meet their sexy lady, and some attempts at high-falutin’ vocal gymnastics, the song meanders into wonderfully silly territory. It’s hard not to giggle at the tale of a wonky-eyed lady, looking for her epileptic dog, no matter how many times you hear the track.

And there lies the unique power of the Conchords in the musical comedy universe. Individual tracks will wax and wane in popularity, and the genitalia humour of 'Sugar Lumps' et al might attract a wider audience who don’t understand the deadpan atmosphere of the rest of the show, but it’s hard to grow tired of this peculiar couple and their music.