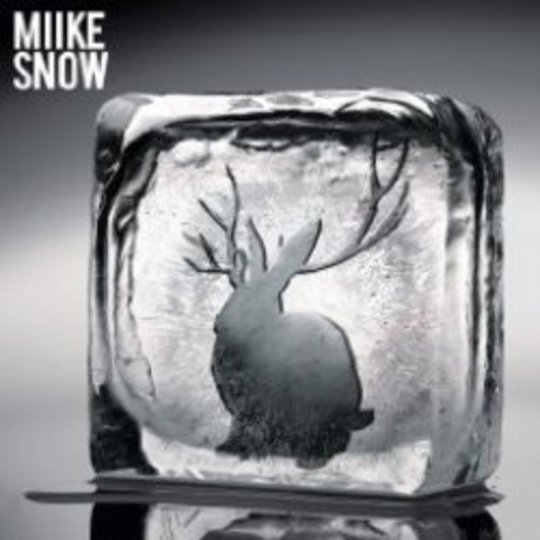 As producers and songwriters for pop stars like Madonna, Kylie and Sugababes, the members of Miike Snow occupy rather a rare position for a new and little known band in that their most anonymous work is also their best known. Together the two Swedish thirds of the group, Pontus Winnberg and Kristian Carlsson, comprise pop production and song-writing duo Bloodshy and Avant, who most famously co-wrote and produced Britney Spears' 'Toxic', a song much vaulted as a high-point of manufactured noughties pop. Their partner in crime is American Andrew Wyatt, who has himself assisted Mark Ronson in production duties on the debut album by Daniel Merriweather (y'know, him what was a bit irritating on that Smiths cover). A pretty good CV all told, while remixes of indie types like Passion Pit, Vampire Weekend and countrymen Peter, Bjorn and John under the Miike Snow moniker are evidence of the fine line between mainstream and alternative this trio tread.

As you would expect from a group with such pop production/songwriting credentials, Miike Snow has more hooks than Ricky Hatton and a fishing tackle shop combined. Those who watched Later... this Friday past will probably still have 'Animal' and 'Black and Blue' lodged in their brains. The former track, and album opener, boasts a number of indelible hooks worked around its staccato synth blasts. 'Black and Blue', meanwhile, features some breathily enunciated vocals and spare piano chords over a propulsive backing of phat beats and busy buzzing synth bass in a successful blend of melancholy and dancefloor-ready rhythms.

These two tracks bookend what is a strong first half to the album, within which it becomes apparent that, despite lending their talents to producing lascivious hit singles, Miike Snow's own sound is comparatively glacial, eschewing bold pop sounds in favour of sorrowful piano and electronic tinkles, in an impressively subtle manner. This is best heard on 'Burial', which is also perhaps the best example of that fine line Miike Snow tread between pop/electro/dance/alternative etc. The morbid chorus lyrics of _"At your own funeral don't forget to cry" _seem somewhat at odds at with the sleekness of the music and Andrew Wyatt's breathy pop balladeer pipes, which suggest that working with the likes of Daniel Merriweather has rubbed off on him. The chanting backing vocals on the other hand recall the Animal Collective's tribalism: Daniel Merriweather Post Pavillion anyone!? (Sorry.) Puns aside, it's an intriguing mix. 'Silvia' is very much in the same pounding electro piano-ballad territory as 'Black and Blue' whereas the unassuming jauntiness of 'Song For No One' stands out in sharp relief to the melancholy of the surrounding tracks, with its needling Vampire Weekend-esque guitar riff providing the hooks instead of reverb laden piano chords.

Unfortunately as the album enters its second half a number of elements which made the its first half so enjoyable begin to get tiresome, particularly the over-reliance on piano. The alternating bars of tinkling glock and the sort of gauzy keyboards that are Beach House's signature give 'Sans Soleil' a momentum at once pleasing woozy and stately, which is then unnecessarily obtruded upon by piano. Even where piano isn't present the synth sounds echo piano in their attack and decay, producing an overly-familiar effect, as on the bizarrely titled 'A Horse Is Not a Home'. Likewise Andrew Wyatt sounds permanently set on a kind of soulful anguished wailing to the degree that the downbeat mood of the album begins to feel more like an over-riding stylistic gesture than the result of real emotion.

Mercifully, there is room for variation. Album closer 'Faker' is a piano ballad stripped of the icy mood of other songs, instead warm warbling synths make it sound like the score to A Clockwork Orange re-imagined by the early Beatles. The scuzzy glam-stomp of 'Plastic Jungle' sounds more like the sort of music you would expect from the men behind 'Toxic' and is in reality one of the few songs which really sounds like a potential dancefloor filler. It would, however, benefit from a vampish lady on the vocal duties. These two tracks save Miike Snow from literally being just a half-good album. That said, given the strange position they occupy between genres (and between the mainstream and underground) it's difficult to imagine anyone considering Miike Snow 'their band' to the degree that they will feel the need to listen to the album in its entirety. Such are their dalliances with dance it seems likely that many fans will come to Miike Snow through downloading remixes or just individual tracks. This is perhaps no bad thing for an album which is somewhat lacking in its entirety, but which boasts several moments of undeniable excellence.