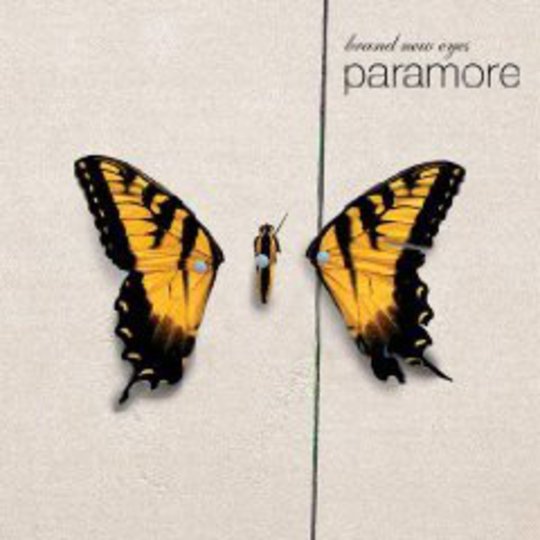 A guilty pleasure right? Platinum-selling, Wembley-filling, emo-punks Paramore. With their anthemic, prodigious take on guitar pop, it's no wonder the kids love them. But with brand new eyes, their third album proper, do the band's claims that they plan to 'venture out and experiment with our sound to see how far we could push ourselves' hold any water? Could this mean a new, bigger, better Paramore, or is this the sort of remark only heard before a band get 'serious' and lose what was so special about them in the first place under a mountain of strings, idiosyncratic time signatures and moody posturing?

Their debut All I Know Is Falling was as passionate and precocious an album as could have been expected, although with some of the songs dating back to the bands' conception, faltered in places where it should have shined. Adversely, follow-up Riot! found the band stepping up not only their songwriting, but unfortunately their FM sheen as well, leaving the album a little too squeaky clean for its own good. But brand new eyes finds them achieving a satisfying middle ground between its two predecessors; guitars crunch and squall with the best of them ('Careful', 'Ignorance') while a peppering of subtle twinkles augment each song, from the mournful synths of 'Brick By Boring Brick' to the lullaby glockenspiel of 'Where the Lines Overlap' and the cascading leads of thunderous closer 'All I Wanted'.

We also find the band finally indulging their significant penchant for acoustic versions (seriously, check Youtube, there's hundreds of them) on 'Misguided Ghosts.' It's a stripped back moment, with its audible count-in, background buzz and twin creaking guitars, a lo-fi treat that somewhat catches you off-guard hidden in amongst its noisier kin, and later creeps up on you reminding you how lovely it is. An album highlight.

Lyrically, brand new eyes sees the band on starkly confessional form. This may seem unsurprising; after all, sleeve-hearted angst is the bread and butter that keeps the filling of pop-punk-emo together in Paramore's own particular brand of sarnie (although for them it's probably more of a sub.) But some of the lines here come laden with surprising candour. Few would expect the break-up rumours of last year to be so explicitly laid bare as they are in 'Looking Up'. "God knows the world doesn't need another band/But what a waste it would've been" Hayley Williams roars; in the hands of another band this might sound hubristic, but their arrangement is so joyously cathartic you find yourself agreeing.

Elsewhere, 'Ignorance's catty snarl at fickle friendship "The friends who stuck together/We wrote our names in blood/But I guess you can't accept that the change is good/It's good" is the best F-you anthem since...well, Riot!'s 'Misery Business' and 'The Only Exception's heartfelt tale of lessons learned from Mr and Mrs Williams "I saw my daddy cry/And curse at the wind/He broke his own heart and I watched/As he tried to reassemble it/And my momma swore that/She would never let herself forget" make for a more mature edge, without the mood becoming oppressively bitter.

This record isn't pushing any boundaries. And if you're already a critic, this isn't going to convince you otherwise. This is a realisation, and an affirmation, of Paramore's musical craftmanship and potential longevity. They have allowed themselves to grow and still retain the innocence and optimism that makes them so irresistible. Guilty pleasure or not, brand new eyes sees Paramore glad to be alive, and as Williams so aptly puts it, just getting started.