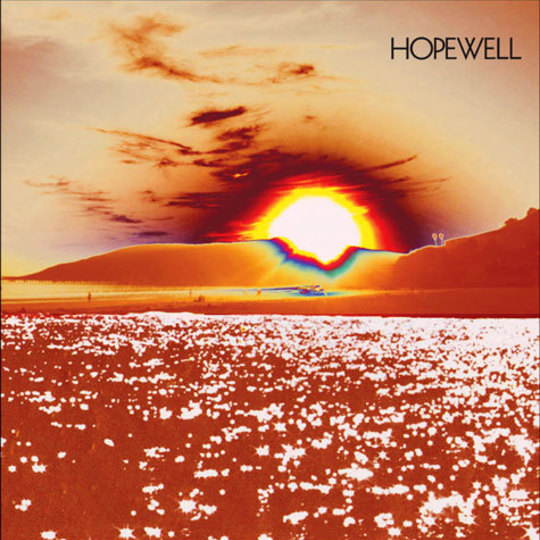 Despite having been active for a good decade, releasing four albums and several EPs along the way, Brooklyn quintet Hopewell are still something of an unknown quantity outside of their own backyard.

Initially formed by Jason Russo and his brother Justin at the back end of the Nineties, the two are perhaps better known for their brief stint as members of Mercury Rev. The pair put Hopewell on hiatus for this interim period before the younger of the two, Justin, finally dispensed with both projects to form his own band, The Silent League. For elder sibling Jason, the time he spent playing bass with Jonathan Donohoe et al seems to have opened up a whole new world of possibilities, not to mention reining in a host of contacts from more auspicious backgrounds. What this meant was that 2005's Hopewell And The Birds Of Appetite, their first release on celebrated psyche/shoegaze outlet TeePee Records, saw them draw on influences far and wide - not to mention utilize the production skills of the Rev's Dave Fridmann - to create something of a concept album, only without all the pretence and general pomposity normally associated with such an entity.

Now, having played with the likes of My Bloody Valentine and ex-Ride frontman Mark Gardener, not to mention backing ex-Can legend Damo Suzuki on his recent European festival shows this summer, Hopewell unsurprisingly find themselves labelled with that whole shoegaze tag once again. Although something of an albatross in many ways, the genre's current revival at least guarantees bands like Hopewell the exposure their undoubted talents deserve, even if their whole sound and demeanour doesn't quite fit the textbook definition of such a movement.

Good Good Desperation owes more to the frazzled imagery of late Sixties San Francisco or newly-defined alt. country acts like My Morning Jacket than it does the 1990 feedback-drenched home counties of England. While there are waves of sound aplenty in the likes of 'Island', with its percussion heavy backbeat fighting against a mid-period Pink Floyd spacejam that evokes thoughts of Crystal Antlers outwitting each other in rehearsals, not to mention closer 'Bury Me Standing' and its overtly noise-infused climax, there's something altogether more refined about the majority of this self-produced record. While perhaps confusing to those familiar with the earlier body of Russo and co's work, this can only be pivotal in converting those still unfamiliar with the more subtle side of Hopewell's schizophrenic existence.

'Worried Mind' is the sound of The Doors had Jim Morrison discovered the joys of folk rather than overblown stadium rock, while the album's centre point, '10,000 Black Masses', gives fellow gospel-tinged country noise disciples Dead Confederate a run for their money in the stoner-psyche department. Good Good Desperation isn't all pleasingly plain sailing though; at times it can be a little discomforting and unnecessarily elongated (check the seemingly never ending title track or aimless MMJ pastiche 'Realms Of Gold' - or don't, as the case may be): even at the customary length of ten songs, it's still perhaps two tracks too long.

Nevertheless, Good Good Desperation is a highly accomplished collection of loosely constructed individual pieces that should gain its creators long overdue recognition on this side of the pond.