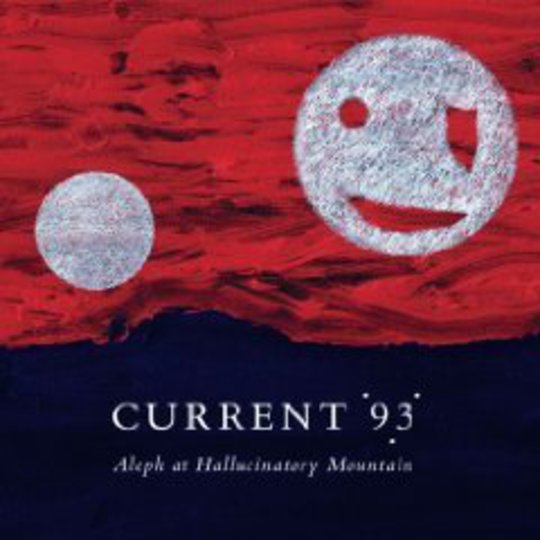 Their reputation precedes them, and trepidation often greets them. Current 93, the sonic child of David Tibet and a permanently open door of musical collaborators, has existed for the best part of 30 years at the abrasive fringes of several genres – noise, industrial, psychedelia for three – without ever being defined by a single one. Perhaps the biggest turning point in the C93 career arc came in the late Eighties, when Tibet became entranced by English folk music (most importantly, Shirley Collins) and used this as a launchpad to link threads of sonic ritualism attempted by few, if anyone, previously. The apogee of this splicing, often dubbed ‘apocalyptic folk’, arrived with 2006 album Black Ships Ate The Sky – by some length Tibet’s greatest critical success. It’s conceivable that Aleph At Hallucinatory Mountain, an often captivating album evidently borne of a unique vision, might surpass it.

As usual with Current 93, there are a healthy scattering of guests. Some names here could legitimately be deemed well-known by people who aren’t underground music dorks – one is Andrew WK, if he still satisfies this criteria, another is venerable American songstress Rickie Lee Jones and the third, Sasha Grey, is one of those ‘indie porn’ figures who apparently fronts her own noise band. Jolly good. As usual, it’s a cheerful mixture of those vital to the outcome – the near-everpresent Steven ‘Nurse With Wound’ Stapleton, and avant-drummer to the big avant-guns, Alex Neilson – and pals who Tibet was content to let moan away on backing vox.

Aleph... is not relentlessly abrasive, by any means: ’26 April 2007’ opens with clean, chiming electric guitars that could be straight off a Nineties post-rock album. Moreover, the folkisms ring through with as much clarity as Black Ships..., maybe more so. The backbone of ‘Poppyskins’, near enough the whole of ‘UrShadow’ and the concluding coda of ‘Aleph Is The Butterfly Net’ broadcasts airy, courtly folk guitar that – minus explicit credits – one assumes to be the work of James Blackshaw, British 12-string guitarist who’s had praise stacked on praise of late for his work in this field. And yet some of the riffs here are huge like canyon walls, believe. Straight from the off (‘Invocation Of Almost’) it’s a riot of wrenching fuzz guitar, gleefully upfront phasing, the endlessly brilliant drumming of Alex Neilson coming on like a distant thunderstorm trying to play along to a Grand Funk live album, with Tibet’s intense intonations and invocations spooling atop the gnarlout: "Asteroth is blushing, cursing, smiling…"

Tibet, following a split EP with Om a couple of years back, continues to forge links between scenes and genres that even a decade ago would have seemed distant. ‘Not Because The Fox Barks’ explores that strain of slow, clanging, rust-ravaged basement rawk guitar which calls to mind all sorts of private-press Seventies longhairs, and late Eighties/early Nineties bands like Slint and Bitch Magnet who were taking their hardcore beginnings and making them intricate and creepy. Again, not names you’d necessarily expect to find in a C93 review, but this is pretty much the background of Matt Sweeney, guitarist here and former member of Nineties indie cultists Chavez (and, latterly, Zwan).

The temptation to look at Aleph At Hallucinatory Mountain in terms of its ‘accessibility’ relative to Current 93’s back catalogue ought to be staved off, for the most part, by the understanding that this is a faintly comedic narcissism of small differences. It’s another in a long line of esoteric outpourings and knotted mystic visions – with a crypto-Biblical slant betraying Tibet’s reputed Christianity; the album’s opening lyrics runs “Almost in the beginning… there was a murderer!” – from a man who has never been obliged to compromise his artistic vision in over 25 years. It will reach an established and deeply dedicated fanbase, of this Tibet can rest assured – if, however, there’s scope for a new and curious morass to chance upon this music, it’s likely because of the swollen popularity of figures ranging from Sunn 0))) to former labelmates recording artists Antony & The Johnsons, rather than anything Current 93 are aiming for themselves. Hard to begrudge a climate where people like these can vacuum up fans like those without having to change anything they do.