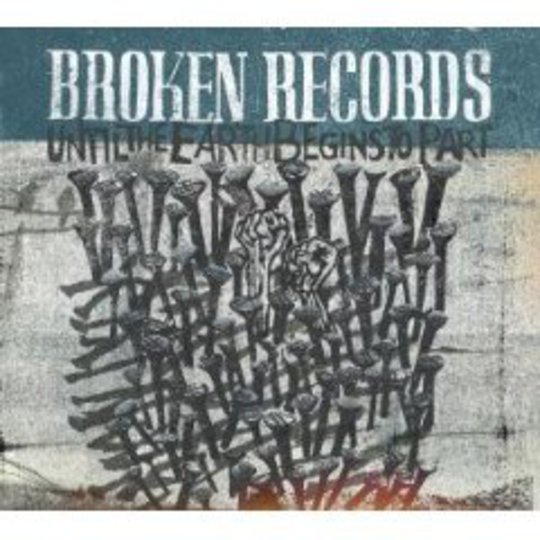 The debut album by Edinburgh septet Broken Records arrives riding a wave of hype, mostly generated by ubiquitous proclamations that they are 'the Scottish Arcade Fire'. However, to this writer's ears at least, they bear a startlingly resemblance to one other band in particular: The Waterboys. Frontman Jamie Sutherland's tremulous, sometimes rasping pipes at times bear an uncanny resemblance to Waterboys frontman - and fellow Edinburgher - Mike Scott, most evident on the re-recorded version of early single 'If the News Makes You Sad, Don't Watch It'. In addition, the septet's epic folk-rock isn't unlike the blend of Celtic sentimentality and 'Big Music' that The Waterboys dealt in on the This Is Sea and Fisherman's Blues albums in the mid to late Eighties.

Throughout Until The Earth Begins To Part, Broken Records recall a number of other artists, but familiarity is no obstacle to great music, and the Balkan folk of 'If Eilert Loevborg Wrote A Song, It Would Sound Like This' and 'A Good Reason' are undoubtedly two of the album's highpoints. The former, despite its cumbersome title and pretentiously esoteric lyrical conceits, is a joyous listen, veering from urgent tremolo-mandolin led verses to a melancholic waltz reminiscent of Beirut, whilst the swoonsome strings and accordion of the chorus create one of the most beautiful moments on the album. Meanwhile, 'A Good Reason' could easily be called 'If Broken Records Wrote a Gogol Bordello Song, It Would Sound Like This', such is the similarity of the lead fiddle melody to the gypsy-punks' single 'Not a Crime'. Regardless, it's an outright barnstorming romp, and the similarities are mitigated somewhat by a repeated rhythmic shift into rolling toms and sawing violins. Sonically, the band also display their prowess on album opener 'Nearly Home'. Beginning in breathtaking fashion with restless fiddles evoking a feeling akin to a rowing boat rolling in choppy waters, the band then up the ante with stirring brass and marching snare drums reaching a natural feeling crescendo of layered strings. A reprisal of mournful violins feels rather tagged on until it segues seamlessly into the urgent bass intro of 'If the News Makes You Sad...'

However, soon the bombast begins to grate. The title track starts off as a Coldplay-esque piano ballad i.e. insipid and uninspired. An attempt to repeat the trick of the album opener by gradually building the song into a somewhat forced crescendo just leaves the listener numb. Unfortunately a rather predictable formula becomes apparent: quiet songs building to a cacophonous climax. Things worsen with the following track 'A Promise'. Here the quiet part is a wonderfully delicate piano melody, which Sutherland accompanies with a reasonable degree of restraint, and it's the most touching moment on the album. Then, once again, piano chords get louder, strings start to sear, drums begin to pound and vocals begin to strain as the song reaches yet another cataclysmic crescendo. The same happens on 'Wolves' and the otherwise Damien Rice-esque 'Ghosts'. Album closer, 'Slow Parade' is slightly more nuanced in its shimmering guitar and strings, and you're thankful when it seems to have ended on a melodic and restrained note, but then after a moment's silence... piano chords get louder, strings start to sear, drums begin to pound... well... you get the idea by now.

It is this desire to maximise everything in an attempt to lend the songs some gravitas that's ultimately Broken Records' downfall. Such cacophonies lack musical interest in their details and disappointingly fail to explore the possibilities that you would expect from such a multi-instrumental line-up. Similarly, singer Jamie Sutherland doesn't help matters as he over-emotes almost every line, sounding terribly self-important in the process, and certainly lacking the kind of catharsis that the Arcade Fire excel in. The emotion on show just feels forced, while the blustery delivery tends to shield the listener from the actual words being sung, leaving the impression that the songs are hollow at the core and lacking intent. Unfortunately those lines which do stand out are somewhat cringe-inducing, be they bland attempts at subversive statement ("Politicians! They don't speak for me") or the pseudo-apocalyptic nonsense such as the album title itself.

If all this seems rather harsh it is to be remembered that some will find a great deal of enjoyment in the bombastic orchestral folk-rock in which Broken Records specialise. However, taken beyond face value, we have an album that displays a band with considerable potential, but which is disappointingly lacking in imagination: compositionally and lyrically.