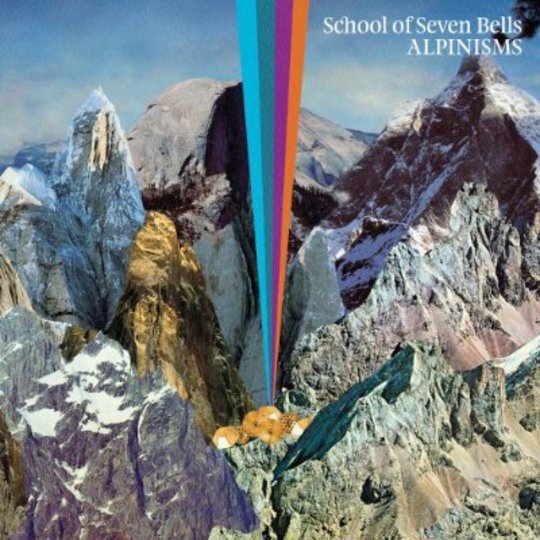 Checking out the cover-art with its photo of alpine scenery (apparently a holiday destination for geometric shapes visiting from the Pythagorean World of Eternal Forms), I’m curiously optimistic about this type of collage being the allusive call sign of a new genre – like the animal-headed people on the covers of alt.country records that tell you the artists in question are taking you into similarly mythic territory, rather than just purveyors of tunes. True, it’s not ideal to compare SVIIB to Fuck Buttons (geometric shapes hover above the cover-photos used by the latter), but they feel like a feminine counterpart, and the electronic drones and swooshes of Alpinisms fill me with a similar elation – manifesting something higher, purer, colder, and yet strangely credible within this world, unlike the escapism of so much dance-music, which creates a sonic utopia only to imply that the real-world sucks when you’re not out of your skull. Alpinisms feels like natural beauty enhanced with subtle pop production, rather than something transitory, adrift from reality.

For the most part, then, this is superior dream-pop (as Americans call it), closest to Blonde Redhead on their last album, suggestive of M83 making slightly more effort with the lyrics, and in places nodding to Cocteau Twins, My Bloody Valentine, Curve. That’s “superior dream-pop” partly because the songs have more backbone than most in the genre, thanks to Benjamin Curtis (from mainstream prog-revivalists Secret Machines); here, Curtis is more successful in his approximation of Pink Floyd’s Animals album than ever before. Meanwhile, the twins, Alejandra & Claudia Deheza, harmonize beautifully, and even when their vocal lines are processed, they end up sounding like pristine post-human cybernetic beings, instead of vocodered automatons (only one appearance, here, for the default dream-pop effect, accompanying “I can’t see-eem / to re-member / my dre-eams…”.

Okay, you won’t be startled by anything on this record, but you may well be captivated by all of it. There’s only one mis-step – ‘Sempiternal /Amaranth’ – where SVIIB choose to extend their least interesting riff longest, i.e. 11-and-a-half minutes. Over an unwavering synth line (buh-wup-uh… buh-wup-uh…), one of the Deheza sisters struggles to wake up (“al-low / your-self / to be- / -lieve me… // al-low / your-self / to be- / -lieve me…!”), while the guitars bluster and rumble to approximate the jetstream in this dream of flying. Inevitably, it falls a long way short of Daydream Nation, or ‘Mogwai Fear Satan’.

When SSVIIB play to their strengths – most of the time – the songs are so smooth that you lower your expectations for any strong hooks, as you would when listening to ambient, only to discover that you’re caught up in a glorious anthem (see, especially, ‘Iamundernodisguise’, ‘Connjur’, ‘Half Asleep’), making this a kind of secret dance-music you didn’t know you were swaying to.