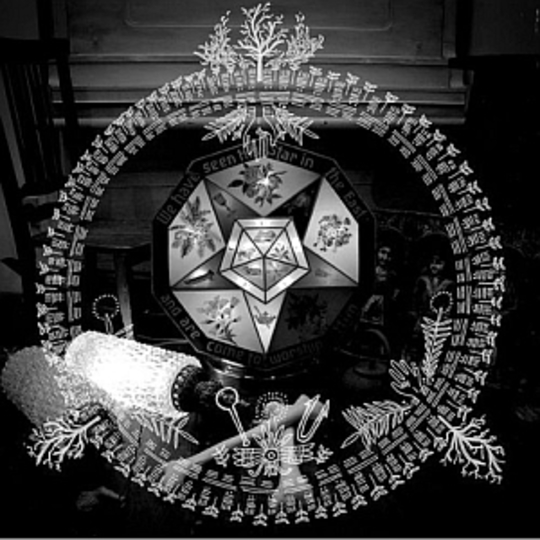 Most of you will have have heard of Fleet Foxes, if not actually heard them. To some, these Folkish-beardy-rockers were hyped to the hilt last year, leaving a sick taste in the mouth of those who believed the lavish praise to be unwarranted. Relevance? Josh Tillman is the drummer for Fleet Foxes, and Vacilando Territory Blues is actually his sixth release as a solo artist (though only his second in Europe). This is his first solo release since he upped sticks and took his place on the stool for Fleet Foxes early last year, so it'd be wrong to accuse him of attempting to ride high on the wave of their success.

It is a tired cliché in folk music that singer-songwriters often sound aged beyond their years, but this is a voice which is an oak-smoked, whisky drenched yet paper-thin husk. It's a voice which sounds so weary that he can barely muster the enthusiasm to finish his hushed words; likewise his softly strummed chords. In the way that England's Johnny Flynn somehow sounds akin to a 55 year old weather-beaten moccasin-wearing troubadour, Tillman is an American equivalent of this form of musical progeria.

Presented on Vacilando are thirteeen compositions of country-blues which are mostly melancholic, with moments tinged with optimism, most notably in 'New Imperial Grand Blue'. The sparse 'James Blues' could come direct from the Wild West; it's a lonesome lament is played out with the backing of slow hand-claps and some lethargic saloon stylings on the piano. The melodious moments are just as good as the melancholic ones, though, and 'Laborless Land' combines these both to anthemic effect as strings and a backing chorus carry the blues. The belting is on a level with the sorrowful mourning: the banjoed 'Bartez Blues' being as good an example of Tillman's talent as a songwriter as any here, with seven minutes of carefully constructed and contrasting tones.

The beauty of this record is undoubtedly in its ambience. Whereas contemporaries like Bon Iver manage to belie their rudimentary recording process, here it sounds at all times as though both singer and six-string are at least several feet away from any microphone, registering some early Oldham-esque qualities – background noise included.

Much like Fleet Foxes, the music contained within isn't particularly ground breaking, but what is done is done well. The same criticisms that could be levelled at Fleet Foxes could equally be levelled at Tillman - that it ticks all the right boxes, but that there's not enough which hits you in the heart. The former is certainly true for Vacilando, but the latter less so. This is a record as good as anything his day-job band have produced. The lyrics in 'Firstborn' sums things up almost perfectly: "If you have to speak, tell it like a condemned man".