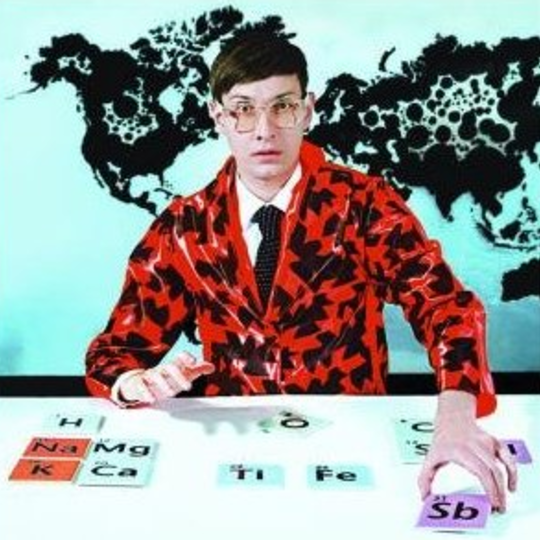 Taking the pulsing synths and woodwind of Phillip Glass or Steve Reich as a foundation, the latest album from Simon Bookish is a groovier affair than his half-and-half synthpop/spoken-word piece, Trainwreck / Raincheck (2006), based on his dream-diary. Dressed like an avant-garde children's TV presenter, and playing with the Periodic Table, on the album cover (handling an element marked "Sb", of course), the album announces itself as another peculiar way of looking at the world, or (let's not be coy), a queer way. As such, Chadburn lays on some inventively geeky puns in ‘Carbon’ – “Lake Michigan exudes a meniscus of petrol / Young man you amaze me! / Architect, Visionary! / Engineer, Poet! / Show me your sweet DNA! / Crystalline debris! Observing the C60”. "Sweet DNA" should be obvious, but here’s a clue: C60 is Buckminsterfullerene, whose molecules are better known as “Bucky Balls”; clever… or is it?

Although the music continues to effervesce throughout, it's frustrating that there’s nothing here as good as his earlier single ‘Terry Riley Disco’ on which Bookish swiped the Pet Shop Boys’ lyrical manifesto (“Che Guevara and Debussy to a disco beat…”, from 'Left to my own devices') and makes his own hybrid-style as an oblique comment on challenging identity: "...it’s mu-sic you can’t cat-ego-rize / it’s Terry Riley dis-co’. True, the delivery, premise, and melody added little to the PSB original, but did so respectfully. On this album, we get pleasant homages to Riley, Reich, and Glass... but no Reich and Glass at their darkest, and no Pet Shop Boys at their chart-friendliest.

Fun and playful though it may be, the lyrics of Everything / Everything also say surprisingly little – they just happens to say it with more or less erudite vocabulary, and reference points from “High Culture” that might be daring (if you engage with them), but are a little too obvious if you just chuck them in (e.g. Ulysses). Take ‘Alsatian Dog’, which is most reminiscent of Sufjan Stevens’ retro-jazz on Come on Feel the Illinoise. Whereas the latter album is part of a project to map American history, state by state, Chadburn’s lyrics are more like Einstein on the Beach by Phillip Glass; i.e. the one that divides Classical aficionados with its lack of a coherent concept. “What does he eat? / What does he eat? / What does he eat with a knife and fork?! / LANGUAGE!” “He”, here, is a dog. Hmm... If you're not so familiar with Classical Minimalism, but you dig Matmos, and Sufjan Stevens’ last album, you’ll be pleased to hear something homegrown. If not, this could be a little irksome. Surely a chorus like “run from fear! / run from fear! / fun from rear!” (‘Portrait of the Artist as a Fountain’) should be more, well, funny…? The deadpan delivery seems like a way of excusing the unfunniness of a joke that Chadburn worries we’re not guaranteed to laugh at.

That’s not to say this isn’t promising as a progression from the last album, with signs of grand ambition and more directions to explore. ‘A New Sense of Humour’ is the odd-one-out, with its darker, funkier, creeping bassline. More typical of the album, ‘Colophon’ lacks minor chords in its trilling pulse, although Chadburn restricts his vocal line to fewer notes, making this one of the most urgent, and even rocking, moments. ‘Dumb Terminal’ also starts from the same Riley/Reich template as most of the tracks, musically, but sees Chadburn trying on a David Bowie / Patrick Wolf voice – getting a bit more feral. Anyone remember Patrick’s old band, Minty…? Now they knew how to make surrealism sound frightening, not to mention violent in their polysexuality…

Ultimately, the surrealism here is curiously anachronistic, as if Chadburn picked up that it’s traditional to pun and speak in code (to conceal your intentions) but spends too long on the wordplay to develop specific ideas. Sure, lyrics focusing on homosexual desire and/or thinking are under-represented in popular music (sexual lyrics by homosexuals: not the same thing), so you can’t dismiss the gesture, but this isn’t as subversive as The Magnetic Fields' plurality of roles (juxtaposing gay and straight lyrics, for male and female vocalists), let alone the confrontational politics of Xiu Xiu, and ends up sounding a little confused.