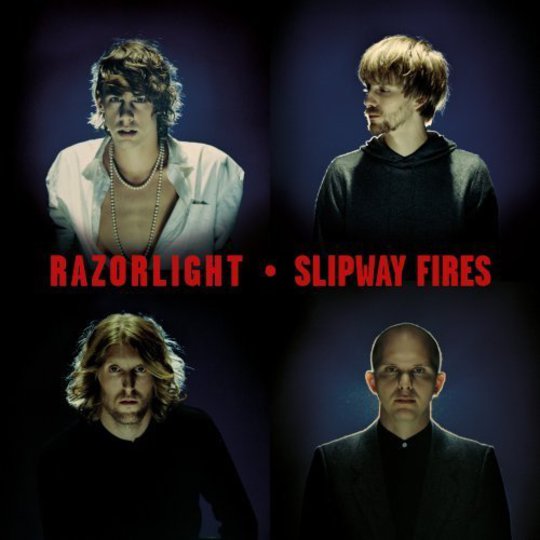 Okay then, hands up, who thinks Johnny Borrell is a prick? Wow... that's a lot of hands. Well, in that case you should totally check out Slipway Fires, I betcha you'll enjoy it. Probably not in a musical sense, you'll understand. No, you'll enjoy it (sort of) because there's nothing sweeter than having your preconceptions confirmed, and in a display of quite admirable chutzpah, Borrell and cohorts have basically made the album that people who don't like them probably wanted them to make.

Despite Up All Night's big sales and Borrell's waffling on about how he was the reincarnation of Dylan, it wasn't until messiah complexes got indulged at Live8 and 'America' blanketed the airwaves that genuine unease started to creep in about Razorlight. Their self-titled second album was actually alright, ditching the naked Television/Patti Smith thievery of the first in favour of a sort semi-successful attempt to be both The Libertines and The E-Street Band at the same time. But Borrell showed himself to be such an arrogant twerp, and so many idiots fell for the hollow 'America' that you really wished you didn't grudgingly enjoy 'In The Morning', that maybe it would square better with you if they stopped writing decent songs and just started churning out, say, 80s-style AOR instead.

Bingo. If you've heard lead single 'Wire To Wire', you'll have maybe sussed out Slipway Fires already. It sounds quite a lot like 'Black Velvet' by Alannah Myles; Slipway Fires as a whole sounds rather like an amalgam of Dire Straits and stadium-era Simple Minds. The production – by 'Favourite Worst Nightmare' man Mike Crossey – is smooth and glossy as a lake of silver glass. There are lots of ballads, lots of earnestness, and it's about as indie as Margaret Thatcher. For a few songs it's so heroically unfashionable, so overblown that it kind of sort of takes your breath away. After 'Wire To Wire' the guilty pleasure buttons are pushed again by 'Hostage Of Love', a slow-burning ballad that'd actually be pretty solid if it weren't for the mind-boggling lyrics, in which St. Johnny appears to suggest that chicks dig him because he's a bit like Jesus. It actually features the line "I am salvation."

Next, and the sparse, fidgety 'You And The Rest' is fine, and would probably have fit onto Razorlight okay. Impressively it's a full four songs before the shark is jumped, but jumped it is with 'Tabloid Lover', a brash stomp in which "middle-class kids... full of front and self-delusion" are the target of scorn. The hypocrisy is quite funny, but the music is dreadful, sub-'Money For Nothing' chest-thumping that belies the fact this band once used to be pretty good at writing rock songs. The record never hits such a low again, but from then on it becomes a headachey throb of over-production and excessive sentiment. 'The House' – the closing lament for Borrell's father – is a little florid, but should technically be more moving than it is. In fact you're so exhausted by the time it comes round the best you can muster at lines like "I'm a child fighting shadows with tears in my eye" is a weary smirk.

Slipway Fires is preposterous, and in a way I actually wish I liked it more – there's something quite punk rock about basically turning yourself into the living incarnation of everything people hate about you. More prosaically, though, Razorlight are a once promising indie band who got a sniff of the big time and charged at it with a vociferousness that left any sense of artistic endeavour choking in the gutter with their discarded new wave riffs. Sad.

Antony And The Johnsons at The Barbican, City of London, Fri 31 Oct