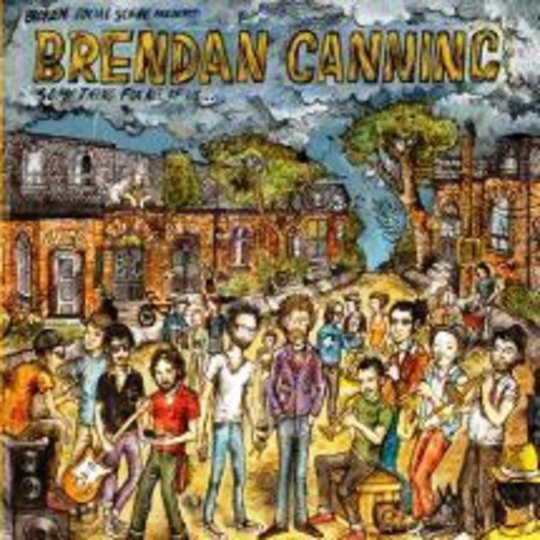 It must be a bit of a bugger being Brendan Canning, aka the guy from Broken Social Scene who isn't in another band and isn't Kevin Drew. I mean, he's probably fine – as you read this he's no doubt sitting in a bath made of money or something. It's just that while Canning co-founded the group, it's never been that obvious what his exact role was in comparison to Drew, whose Spirit If... album (review) of last year pretty much confirmed the suggestion that he is BSS, more or less.

Now the time has come for Canning to makes his case himself with Something For All Of Us…, the second of the Presents... series which - one imagines - will only ever consist of solo records by these two gentlemen. And though it's not quite as good as Spirit If..., he most definitely holds his own. If Drew typically takes a kajillion or so musicians and cranks up the bombast to such levels you'd think there were, um, two kajillion, then Canning here employs a cast of 20 or so Social Scenesters to surprisingly subtle effect. The title track, for instance, has the ingredients to be anthemic - fast guitars, a nagging vocal - but pointedly opts for muted atmospherics instead, his softly repeated intonation "you bet your life boy" sinking into a gently driving blur of fuzz.

Nothing actually sounds crazy different to the day job, but Canning uses the musicians in a painterly fashion, applying painstaking layers to tap into a different energy to Drew. 'Been At It So Long' is like a blearily beautiful Monet sunrise, a sorrowful spiral of keyboard gradually glowing brighter and more thrilling as instrument after instrument lock into its hazy groove. A showier vocalist would leave 'Love Is New' a gauche muddle, but it's the best thing here, squelching sex-funk and Canning's low key mumble forming a deliciously uneasy partnership that eventually drowns in a disconcerting climax of distorted organ and discordant horns.

He doesn't always find interesting ways to scale the sound down. A handful of songs – the sparse 'Take Care, Look Up' being the worst offender – simply can't get around the weakness of his voice, while 'Antique Bull' just sounds like a pleasant indie band, which is definitely not what the BSS stamp promises.

In the final analysis, Something For All Of Us… isn't going to change anything for any of us - Canning will go back to doing whatever it is he does in Broken Social Scene, Drew will remain its fire eye'd leader, and the Presents... series is profoundly unlikely to shift a single unit to anyone not already a BSS fan. But in his own quiet way Canning has both proved and defined himself, and I think that's what was important.