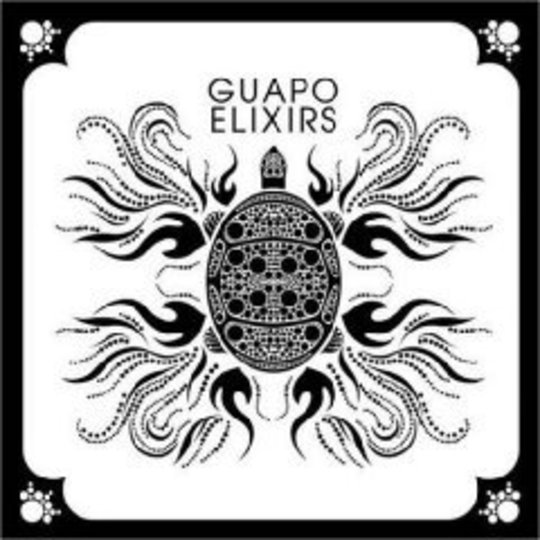 So I can see how this could be taken as a backhanded compliment, but there was something almost reassuring about how blunted and ineffectual Guapo were at this year's Supersonic Festival. I mean, I was in fact hungover, so apologies if anybody thought it was the greatest thing that ever did happen, but to me it simply confirmed the fact the core duo's nuances have become so exquisitely refined on record that they'd pretty much gazumped themselves when it came to recapturing the magic with a four-person live set up. Or yeah, that thing I said about the hangover.

Anyway, even though Guapo were never really about conventional post-rock dynamics, they've been noticeably simmering down ever since 2005's Black Oni, and_ Elixirs _is a record that rarely tries to impose itself, hovering in darkly glistening coils at the edges of your consciousness, occasionally gliding in for a discreet kill.

Opener 'Jewelled Turtle' is certainly in no hurry – after near enough ten minutes of soft, intricate chimes, your mind starts slipping around its glittering surface until a rustic, serpentine violin slithers out and brings matters to a yearning, mournful close. It's these laboriously crafted passages of elaborate percussion that drives much of Elixirs:_ 'King Lindorn' _features the closest the record has to a old school crescendo, but it's the journey there that's more gratifying, crystalline flows of gongs, cymbals and lord know what else coalescing into hugeness, like a delta in reverse.

A centrepiece of sorts comes in the shape of an exquisite pair of vocal-driven tracks, sneakily but wisely reprised from 2006's Twisted Stems EP. Alexander Tucker turns up with his big bag of FX to slather on a languorous coating of half-chanted vocals on to ‘Twisted Stems: The Heliotrope’, giving depth to the song's flat drone. It's followed by evil sister_ 'Twisted Stems: The Heliotrope'_, on which Jarboe (of Swans fame) turns up to administer a good wailing over some faded mechanical clanks.

It's an old-fashioned, unsubtle piece of atmosphere that anchors a record on which one's appreciation of the byzantine craftsmanship occasionally outweighs simple enjoyment of the actual songs. But that's okay – as we've established, Guapo are a delicate creature, and Elixir isn't for day to day use, but to stun you on special occasions.