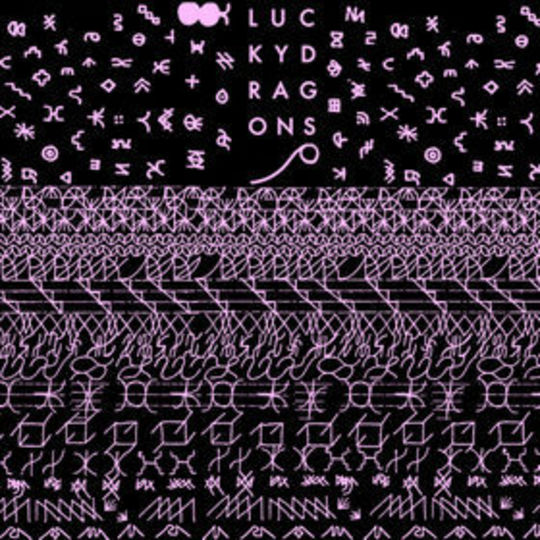 Los Angeles’ Lucky Dragons have, somewhat astoundingly, had 17 previous releases before Dream Island Laughing Language, though it’s fair to say that the vast majority of their back catalogue has been under the radar (this one came out in July and we’ve only just received a copy!). Their 18th release is essentially a disparate collection of 22 tracks with little theme or thread; all without the hint of anything approaching melody or discernable structure.

To place it into a genre-shaped box is almost impossible, but it is most redolent of Matthew Herbert’s Plait Du Jour; though to the uninitiated ear it may sound like a fairly arbitrary collection of noises - rubber bands, necklaces, and rocks all make up the soundscape - made to some sort of rough pattern. And that's exactly what this album is.

The interesting and engaging moments come and go. Gongs are clipped (in ‘Clipped Gongs’, no less), strings are endlessly plucked, the constant pitter-patter of drums, tribal or electronic, provides what is perhaps Dream Island Laughing Language’s most prominent constant. It's simply as its title suggests: a dreamy conveyance to another time, another world, but equally it jolts unexpectedly and teleports you into the next distant world of disorientation. In ‘Wooden Cave Loop’ a banjo whisks you off from an ethereal but unsettling choral vocal layer and plonks you down, face first, into a shimmering and striking loop of ghostly vocals and offbeat percussion.

Parts are pricked with delicate acoustic niceties; ‘Morning Ritual’ is incessant and arrhythmic, with rainfall-like pricks on tender heads and ears whilst ‘Free Guys By The Sea’ presents pleasant pipes-a-plenty before an almost Autechre-esque rapid tingling and tapping kicks off ‘Desert Rose’. ‘Oh I Understand’ is perhaps the only 50 seconds of melody present on the record, and is seemingly cut from a barber-shop quartet of some kind or another. It feels utterly out of place.

The more lengthy tracks are wonderful, wistful, and well worth a listen, in particular ‘I Keep Waiting For Earthquakes’, which sees a child-like ambience created by recorders, handclaps, and a distant piano. It sometimes shimmers, it sometimes sparkles, and at other points it soothes, but Dream Island Laughing Language’s ideas and concepts are, sadly, just that little bit too scattered and strewn across its 22 tracks to warrant many repeated sittings.