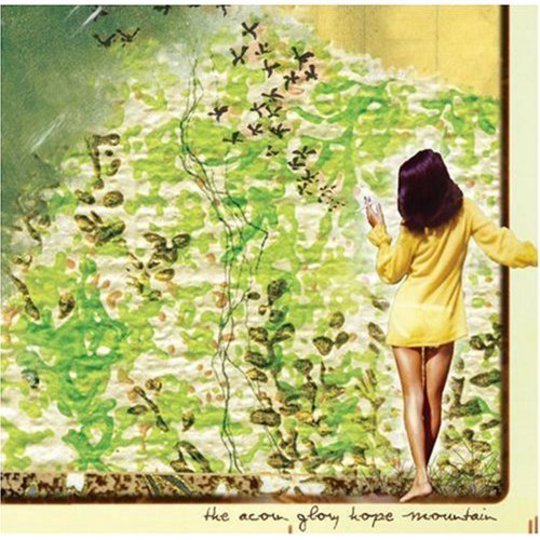 One of the joys of occasionally writing about music is that sometimes people will send you things you haven’t heard of before and would otherwise dismiss because you have to wade through so much rubbish. There is the chance that you cast away pearls of musical invention, visions of the future and Kooks singles (seriously, STOP SENDING THEM), but if you’re not expecting something then you, again, occasionally get a reward. The lovely folk at Bella Union saw fit to throw in a copy of The Acorn’s latest release, Glory Hope Mountain, alongside something I was reviewing elsewhere, and I truly thank them for it.

Consummate musical intelligence, clarity of expression, fun and satisfying nuance and a distinctive drama run throughout Glory Hope Mountain. Much of this is exhibited in the very first track (the album’s most important and probably best), 'Hold Your Breath', where proceedings begin with trembling control. Rubato pauses, such gentle escalation and word-painting create synaesthesiac experiences, ones you can imagine enjoying for long after. Vocalist Rolf Klausener is just so_ clued-up, using simple but brilliantly effective touches here. It seems so easy. When he sings, in a Carl Wilson-esque broad shimmer, of climbing constellations moving in semitones, his vocal line takes a gentle upward curve – as an audience we’re vaguely conscious of it happening, but it forces you irrevocably to listen to what he says next. When he then mentions a _"melody of gravitation", the threads of both celestial imagery and musical terminology are sweetly continued. While not a massive challenge to unpick (and why should they be?), these knotted fragments of intellectual interest riding on top of the beautiful music make the whole experience very memorable indeed. Plucking the strings behind the headstock aids the starry atmosphere, and the band are very careful to not explode so much as to become hackneyed when they finally do climax. A masterpiece of construction.

Obviously, it’d be insane fortune to continue at this rate, and things dip slightly for less excellent tracks. ‘Flood’, while invigorating, calls to mind the comparative woe of Iron & Wine’s world music live show and ‘Even While You’re Sleeping’ plods a little with not quite enough melodic variation, but that’s pretty much all, save for a few stock moments here and there. But those are sometimes difficult to avoid, such is the nature of operating in a rock group, an ensemble with such strongly defined codes. ‘Crooked Legs’ won’t sit still, appropriately, rumbling along like Norfolk & Western’s strongest tracks, with melodic drive and marimbas aplenty. A definite dynamic of tension and release is created by the constantly altering percussion, and buoyed by prettily simple guitar lines. Again, The Acorn are using their heads, making very sensible and sparing choices about how their music is presented. There is a massive intelligence sat behind these songs, but it’s never foregrounded. You have to explore that cave yourself. And what better way to encourage that than to make the melodies so imitable and so classically built?

That the whole album is based on the life of Klausener’s mother (a Honduran with a terrifying-sounding life of floods and orphanages) is appropriate. It may seem trite to compare it to the hero’s journey model, but many elements are present. Setbacks, disasters, redemption, family ties, guides and helpers all make appearances – culminating in the lovely ‘Lullaby (Mountain)’ where, sensitively, we’re told that everything’s going to be alright. The flood waters appear to have receded, even though we were pulled under for a while, and normality has resumed. Something got Klausener’s mother through it all. As he sings on ‘Flood Pt.2’, “I think I’ve got this covered,”. Glory Hope Mountain is an excellent achievement, and heralds Klausener as a major talent in the idiom of narrative song, primed to rival Daniel Bejar, Colin Meloy, Spencer Krug and others. The next LP should be excellent.