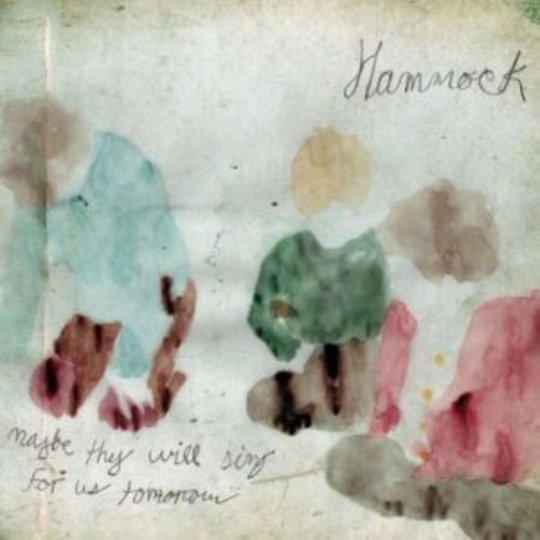 The success of music like Hammock’s is entirely dependent upon the context of consumption – the whereabouts of the listener, and their mental and physical state, at the time of experiencing the duo’s floating drones and sweeps of luscious ambient sound.

In a cold environment – not temperature wise, but regarding the richness of one’s surroundings – like the office in which Maybe They Will Sing For Us Tomorrow was first heard by this critic, it made nary an impression. Slight, slender traces of post-rock moans and wails, wholly instrumental, no percussion to speak of – it bypassed senses focussed on jobs at hand, becoming a charming background without any purpose beyond accompanying chatter about more mainstream-friendly happenings in the music world.

Absorbed alone, though, with only thoughts for visual stimuli, Maybe They Will Sing For Us Tomorrow finds form, shape and purpose. A studio recording of the re-enactment of the Nashville pair’s first-ever live show – at an Arkansas property housing an art exhibition by Iceland’s Riceboy Sleeps, one half of whom is Sigur Rós’ Jón Thor Birgisson, last summer – this album bleeds out its shifting tones at a snail’s pace, not once lapsing into the compositional predictability that can sometimes blight such ornate arrangements. It’s the sound of its makers reduced to a stripped-down, exposed core, the splendour of LP previous Raising Your Voice… Trying To Stop An Echo streamlined and refined, focussed and funnelled.

Certain pieces do seem to outstay welcomes when the record’s reassessed in a controlled manner once more – ‘City In The Dust On My Window’ drags its heels, pretty though they are, for about two minutes too many, and ‘Razorback Drug Town’ appears to be only half as affecting as its concise four-minute frame was when heard with blurred trees rushing by a train’s smeared window. But as a whole this record retains the traits of Hammock’s past endeavours, which will please existing fans, while offering a greater accessibility given its forced potency – as a ‘live’ set, its points are made swiftly and clearly.

Marc Byrd and Andrew Thompson create the sort of music that undulates gently away in the ears while something magical is unfolding in front of the eyes – you could put this on a loop and go blind to the sight of falling stars all night long. It’s not best served with distractions, as a sensory tickler secondary to something more pressing. But take the time to concentrate for an hour and you will experience what a guitar gently weeping truly sounds like.