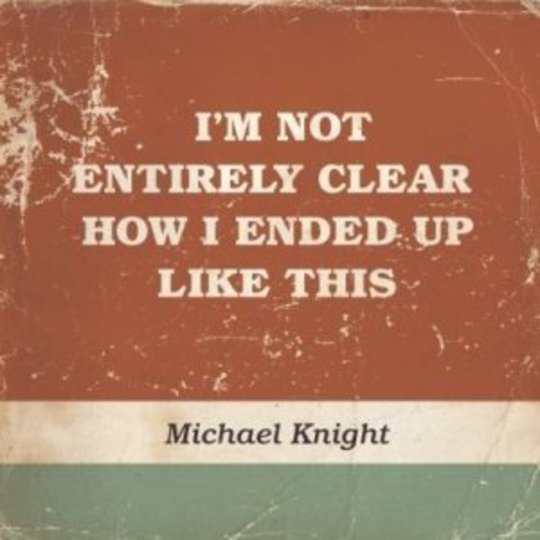 Michael Knight are a band, not a person. This deceptively awkward misnomer had me writing out half of this review with erroneous grammar, before I bothered to read their press release. It also makes it hard to slip the band’s name into IN REAL LIFE conversation:

Not that I’ve had such a conversation – Michael Knight’s album isn’t worth bringing up in an IN REAL LIFE conversation. Nor has anyone outside of Ireland heard of them either, so this made-up discourse falls at the first hurdle. I’m Not Entirely Sure How I Ended Up Like This – the second album from Berlin-based/Irish-born protagonist Richie Murphy and his associated musicians – leaves me with ambivalent feelings, so much so that I was going to make the pun ‘I’m Not Entirely Sure If I Like This’. Ooops.

I admire this record’s sound – it purveys a charming blend of eerie, cinematic indie-rock and piano-driven swoons. There’s just something lacking in the songs though – oh yeah, actual songs. Eleven tracks and 25 minutes in, its confused attire makes me crave for something substantial, something that will give me some kind of opinion on it either way. It’s a likeable, but empty record. As it is, the instrumentation is foreboding and overbearingly grandiose, while the band’s poetry is given little space for praise with Murphy’s timid voice at the helm. The final mix sounds so decidedly average.

Those lyrics, somewhat understated throughout, are at their blackly melancholic best on ‘Coronation Street’. It’s actually the most interesting track instrumentally, too, with lush Spaghetti-western whistling and girly vocal coos. In stark comparison, ‘And The Party Was My Idea’ segues into a bland melange of overwrought orchestration and lazy vocals, which even Brian O'Shaughnessy (a man who as put his name to production skills to My Bloody Valentine and Primal Scream records) can’t save from mediocrity.

Some parts of I’m Not Entirely Sure How I Ended Up Like This remind me of a modern-day Lee Hazlewood. But with that kind of comparison comes great expectation, and Michael Knight just make me yearn to put on Requiem For A Lost Lady* instead. If anyone wants to explain to me the value in this record, then by all means, please do. It took me a while to ‘get’ The Velvet Underground too.

*an album that everyone should own, especially those with delusions of owning a good music collection.