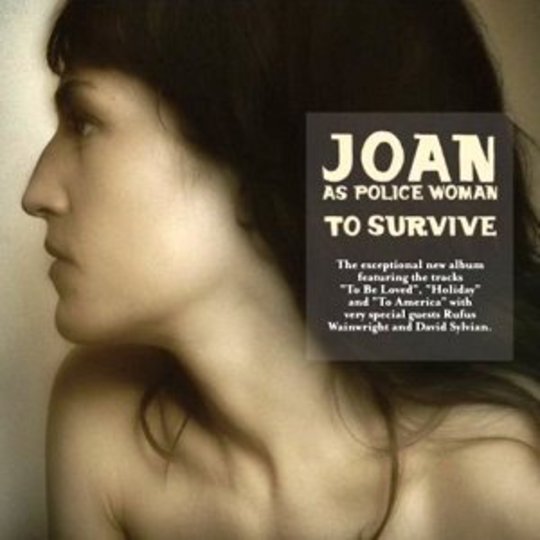 Upon its release two years ago, Joan As Police Woman’s debut album Real Life reaped great acclaim from certain quarters. The first ‘solo’ project of Joan Wasser (as much as they are in fact a trio, Parker Kindred recently stepping in on drums), it saw her step out from the shadows of contemporaries such as Antony Hegarty and Rufus Wainwright (both of whom she’s sung back-up for) with a startling collection of songs; from the luminescent splendour of ‘The Ride’ through to the devastating emotional impact of closer ‘We Don’t Own It’ (about and dedicated to friend Elliott Smith) it yielded countless replays, quietly converting a number who may have been put off by the fearsome, misguided ‘coffee table’ tag, through its enduring quality. Guy Garvey of Elbow considers its title track one of the finest written in recent years, and while I’m inclined to agree with him, the fact that said tune isn’t even the strongest on the record speaks volumes.

So it’s not without a sense of excited trepidation I approach To Survive, though a recent show in London that found the band relaxed and on fine form went some way towards allaying my fears. Lead single ‘To Be Loved’ (it’s all about prepositions on this effort – two pairs of songs on the album all sharing the aforementioned) is deceptively light and frothy, Wasser’s words tumbling from the speakers most agreeably, bright keys and shimmering guitars perfectly complementing. For all that the more up-tempo numbers like this gradually, insidiously make their way under your skin, it’s when Wasser lays herself bare (metaphorically of course, though it’s surely no accident that she appears literally so on the album’s cover) that this truly, resoundingly affects.

Take for example subsequent sister song, ‘To Be Lonely’. Against a backdrop of minimally struck piano later embellished by strings and deep, swelling backing vocals, Wasser’s voice wavers with tremulous, magnificent effect. Throughout both albums she has managed to sound simultaneously vulnerable yet imbued with wearily resolute strength, and on To Survive’s soaring title track (the penultimate on the album) her intonations – “Sleep now little one / I know how it feels to be sad” – culminate in a twinkling, profound upturn, as bolstered by naught but her piano and violin, she finds the “spark” that she needs – that we all do – to survive. Foreshadowing this: “I’ll brave the night alone / The dark, uncertain skies / I’ll make it through”. A slow-burning, graceful ballad, it also showcases her unique ear for melody, whereby the lugubrious tones and minor chords employed gradually reveal themselves greater than the sum of their constituent parts, whether this be through an initially unnoticed key change or decisive, unexpected lyric.

Which isn’t to detract from the other highlights on display – the enveloping synthesizers upon which ‘Start Of My Heart’ floats forth, Rainy Orteca’s addictive basslines or the questioning, shuffling thrust of opening track ‘Honour My Wishes’. The best, however, is saved for last, following the corner Wasser turned on the title track. Rufus Wainwright takes the star guest spot (capably handled by Antony on Real Life) on the closing ‘To America’. Coming across very much a modern take on West Side Story replete with fine vocal performances from its central pair, sweeping strings and ebullient brass, it’s a jubilant finale to an album that, while never quite surpassing the evocative beauty of the band’s first, matches it with a keen flourish.