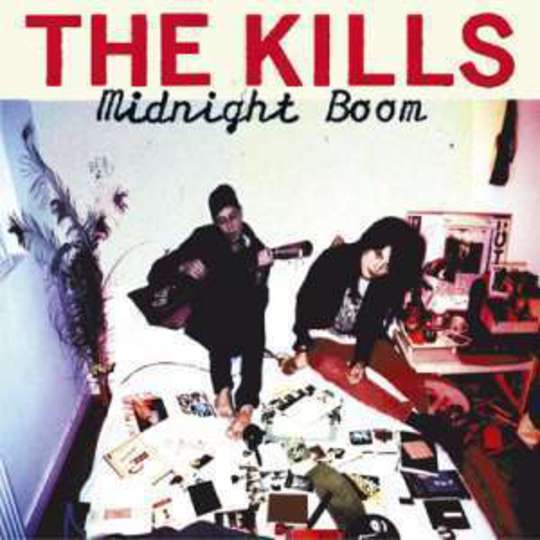 Pete Doherty was already a talentless, drug-addled tosser before the pair of them became the talk of the tabloids, and anybody who believes her current relationship with Jamie 'Kills guitarist' Hince poses any sort of threat to the quality of his band's music should take a listen to Midnight Boom, and then spend their time thinking about something more important.

Like their other records, The Kills’ third LP is shot through with a single-minded vision of how music should be: namely tense, taut, minimal... exciting. They've been dismissed previously as mere rock and roll fantasists, for taking delight in exacerbating the seedy, the seditious or, worse, the fashionable side of the genre, but as an alternative to hearing bands who bang on about the ennui of so-called 'real life' for eleven songs on an album, it remains appealing.

Though they've enlisted the services of Spank Rock producer Armani XXXchange (née Alex Epton) this time out, Midnight Boom isn't the stylistic sea-change some might have been expecting. All that's really happened is that they've stripped their sound down to its barest, rawest form. The result is their leanest collection of songs yet.

There's more of an emphasis on beats and bleeps (Epton's doing, presumably), and slightly less on layered guitars or synthetic bass - which they seemed to flirt with on 2005's No Wow. As a result, it's a record that's certainly ready for the floor without heading consciously in the direction of the dance-rock zeitgeist... whatever that is. The Kills go New Rave? Stop right there.

The principal components of their Velvets-meets-Royal Trux shtick remain in full working order. Hince's scattergun guitar strafes the likes of 'M.E.X.I.C.O.C.U.' and lead single 'U.R.A. Fever' with bursts of primal noise, while Alison Mosshart's machete-sharp howl sounds as feral as ever on 'Alphabet Pony' and 'Hook And Line'.

Elsewhere, 'Last Day Of Magic' stakes a firm claim for being the record's standout moment, with Mosshart cooing malevolently - she's a master of this seemingly oxymoronic form of delivery - about hurricanes and tornadoes while Hince conjures up his own musical equivalent in the background. By their standards it's a poppy number, with a memorable chorus and everything.

The pair's unspoken chemistry, nearly as obvious on record as it is live, hasn't altered one bit either. The Kills still, predominantly, make music to fuck to. But Midnight Boom has its tender moments too, like when Mosshart sings "I love you so much / Never forget" on album closer 'Goodnight Bad Morning', a heartfelt, piano-led ballad shorn of the electronics. It's one of the most direct lyrics they've ever written.

Elsewhere it's business as usual with metaphors dressed up in The Kills' hallmark lyrical ambivalence. "Everyone's a winner / Laughing like a seagull" ('U.R.A. Fever'), "Love is just a dialogue / You can't survive on ice cream" ('Cheap And Cheerful') and "Paint plastic Jesus on the dashboard" ('Alphabet Pony') might not have a great deal of meaning if taken literally but, then, that's what imagination's for, right?

The Kills' third LP isn't going to change many people's opinions about their music. They don't seek to rip up the rulebook they stuck to so rigidly on the previous records, and nor do they grant Epton a licence to ride roughshod behind the desk. A few pages of that blueprint are perhaps rewritten, notably the ones about percussion, but the lyrical themes remain suggestive, sleazy and stubbornly non-committal, the instrumentation primitive and the tone dark as ever.

They've never been a particularly easy band to get along with, Midnight Boom doesn't change that. But it's a record that certainly stands up to comparison with their previous outings - sometimes bettering them - and, if you've been seduced by their charms in the past, be prepared to fall in lust all over again.