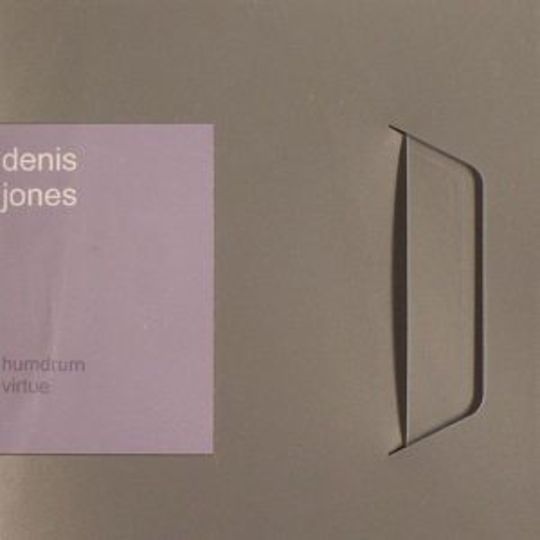 ‘Humdrum’: lacking variety; boring; dull; tediously repetitious. ‘Virtue’: moral excellence; righteousness; an admirable quality; an effective force. Yep, whatever way you look at it, the chosen title for Denis Jones’s debut long-player doesn’t make sense. Not really. And yes, nitpickers, I realise I haven’t covered all bases regards ‘virtue’ there. And maybe it’s an oxymoron and I’m totally missing the point... Perhaps – but if that was the case, surely this album wouldn’t be so, well... so humdrum?

Long-winded introduction out of the way, I’ve implied a record without merit, which isn’t the case. Manchester-based troubadour Jones likes to play the guitar, and he’s evidently got a bit of a thing for loop pedals too. His prowess in this field – the layers of sound he builds, the delivery of his songs in a live setting – is undeniably impressive. Which is all very well, yet there’s a lack of colour in Jones’s compositions, little subtlety and no real melodies to grasp hold of. Effectively, who cares about all this loop-station-whirs-and-beeps-techno-claptrap if he can’t wrap it around a decent tune? (He can, actually, but I’m not there just yet.)

A curious beast, is Humdrum Virtue. Pristinely packaged in a sleek cardboard fold-out case with a numbers-based track list (witness: ‘One Loop’, ‘Third Song’, ‘Five Papers’ – until suddenly we jump to ten, 17 and finish, conversely, with ‘Beginning’). Let’s take the fifth track then: ‘Five Papers’ finds Jones intoning “I suppose I don’t like hierarchy / I never did, I never will” among other nuggets of lyrical nothing, and over four minutes ultimately fails to go anywhere. A very electric-sounding acoustic guitar is strummed brashly and the vocal’s enunciation grates – at points over the course of this record it feels like Jones isn’t a particularly innate singer at all; that he’s almost pushing the words out from inside him. Next track ‘£10 Of Electricity’ fares better initially – a bluesy two-note riff punctuated by swathes of sinister barroom harmonica and bursts of piano, it soon runs out of steam and long overstays its five-minute running time, insipid lyrics and all.

Frustratingly then, this is an album by a young (24-year-old) musician with obvious talent, marred by a few key, grating errors. It takes itself too seriously, it’s one-dimensional, it certainly doesn’t get away with its title (perhaps insinuated earlier), but – BUT! For all this, its final track is a mesmeric, wonderful piece of work. Given the repetitive torpor elsewhere, from the very first second of ‘Beginning’ it’s as if the clouds have lifted. Minor key makes way for major, Jones’s guitar skips along merrily and the general optimism evident even extends to his voice, which sounds better here than anywhere else on the record. The words are ridiculous to the point where they're inspired – “There’s Vera Lynn on the violin / Elvis Costello, well he’s playing the cello / It’s like a super-band, when they all lend a hand / Yoko Ono - well she’s mixing in phono” – far preferable to the grievances Jones airs elsewhere (with advertising for example groan), and entirely in keeping with the nature of the song. There’s trumpets even. Trumpets!

So was it all a ruse? The entire album preceding naught but an exercise in enhancing the impact of its final song? Well, no – and said limitations can’t be transcended by a late sprint to the finish line. What ‘Beginning’ does imply is that should Jones harness his gift and use it wisely in the future things will undoubtedly look up.