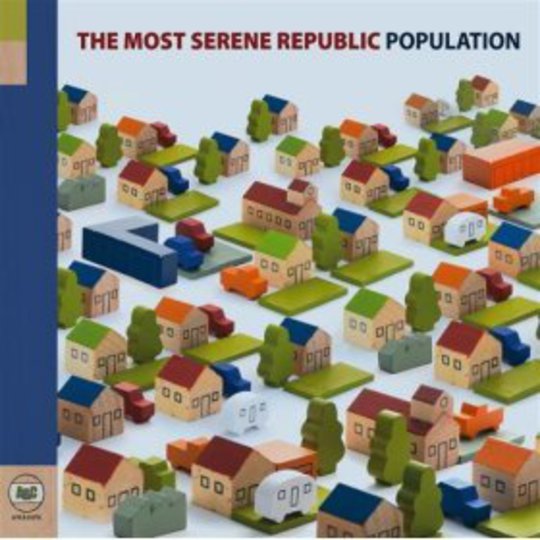 I dunno. You let the kids rifle through your old prog-rock records and they come back from a Broken Social Scene-echoing debut with a sophomore (allow it, leave it) that’s all flippin’ Emerson Lake & Palmer over Polyphonic Spree bonkers, the sort of album you know Guillemots desperately wanted to write for their second long-player but simply didn’t have the depth and breadth of musical experience in their souls to pull off. It’s eccentric without ever seeming cloying, skittery like tail-chasing kittens on ice and as brilliantly aggrandizing terms of stylistic scope as is possible, without its makers ultimately collapsing in the studio and the whole thing falling into the subsequent black hole.

But, The Most Serene Republic haven’t forgotten the pop to balance their more out-there tendencies on Population, the follow-up to 2006’s recommended debut Underwater Cinematographer (review). And it’s important that they do realise when to rein in their extravagancies, simplifying the cacophony into a crystal-clear clarion call of ambitious intent. Additionally, the sextet incorporate a greater jazz atmosphere here than was evident on their debut, with the instrumental ‘A Mix Of Sun And Cloud’ one part daytime soap opera theme tune, several parts space-age down-tempo jazz a la Air with an expanded palette. It’s one of many shifts in direction across these 13 tracks – if you came for seamless cohesion, best turn back now.

What I’m alluding to, then, is that Population is another muddled and jumbled bag of cross-genre influences, yet while the Ontario band’s first long-player occasionally tap-danced its way into rather-too-odd territories, baroque twists and dizzying diversions within too short a space of time repelling as many as were attracted, this album’s a more refined offering. Clearly the band have studied the minor mistakes of its predecessor and set out to eradicate them, and they’ve almost completely succeeded. It’s rare, indeed, that the listener feels the need to skip any of these harmonious multi-vocal workouts, these genuinely original compositions that stretch their makers’ creative limits while never alienating their established fan-base.

It’s odd, then, that The Most Serene Republic’s Ryan Lenssen (keys, and producer here) has referred to Population as the band’s “anti-record, the one in between that celebrates the negatives of everything”; odd, because it’s hard to filter the moroseness from the merriment. A scan of the lyric sheet provides clues – there’s ache in the words of ‘Sherry and her Butterfly Net’, and the title of ‘Solipsism Millionaires’ as good as speaks for itself – and there’s plenty of melancholy in another instrumental offering, ‘Agenbite of Inwit’, but the whole is always more overpowering than the constituent pieces, and said whole is almost entirely gleeful. From the spirits-lifting gang vocals to the playful instrumentation that never leans too heavily on the work of that first sentence act of parallel reference, Population is an album almost impossible to not fall for; it’s a record rich in longevity, in essential extravagances that really do comprise a cure for the sound-alike band blues.

If Guillemots’ Red is your record of the year thus far, you’re strongly urged to make this album your next purchase – it’s not just a better album, treading a comparable line in many cooks/single broth dynamics, but one that could well prove to be one of the year’s very best come December. It’s more expressive of emotions, of heartfelt sentiments, than Broken Social Scene’s self-titled, and more sensible than the proggy overloading of Brain Salad Surgery and similarly (although perhaps wrongly) derided titles of its ilk. It’s a middle of the road album (and the middle of three, it seems; the band-proclaimed Empire Strikes Back of TMSR's trilogy), but the road’s someplace you’ve never been before, and where it winds up…?

Doesn’t matter. All you need know is that you’ll feel fantastic when the end’s in sight.