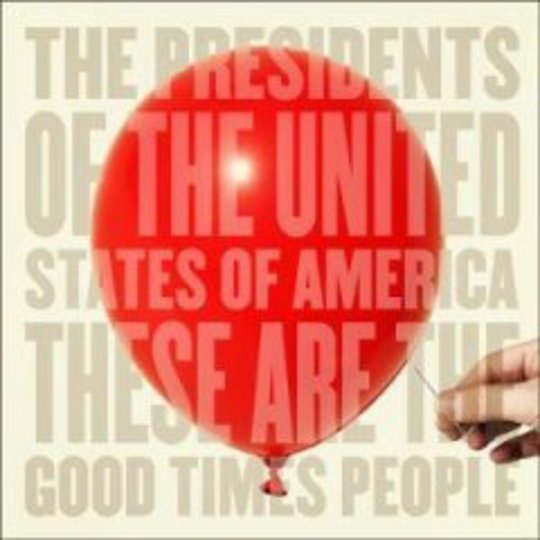 Looking back on it, the mid-‘90s were a rather peculiar time. Iraq had only been invaded once by the West and everyone generally agreed on it, the global economy was entering a golden phase of growth and vitality, and *The Presidents of the United States of America *had a massive hit on their hands with their self-titled debut: a collection of off-kilter power-pop tunes released in the glut of so-called ‘alternative’ bands flooding the global marketplace in the wake of the Seattle grunge explosion.

Fast-forward over a decade later and we now find Iraq in chaos following a repeat invasion, the global economy on the brink of total meltdown and The Presidents of the United States of America are back with their fourth LP, These Are The Good Times People. Another collection of off-kilter power-pop tunes released in a marketplace now glutted with guitar bands looking to unearth and repackage every past musical style imaginable.

Well, as you’ve probably guessed by now, These Are The Good Times People is a mere shadow of its ‘90s counterpart that struggles to retain any of the President’s early charm. ‘Lady Bug’ sticks to a harmony drenched twang unfortunately favoured by podgy Canadian hucksters The Barenaked Ladies._ ‘Truckstop Butterfly’_ makes the mistake of trading in the pop for a watered-down take on goofy country rock while ‘French Girl’ begs us to “always fall in love with a French girl” as the band do their best impression of a pre-pubescent Foo Fighters recovering from a bout of puppy love contracted while studying abroad.

Honestly, in the wake of current global events, if _These Are The Good Times People _is really meant to be a sign of ‘the good times’, then the end days just might be closer than any of us think.