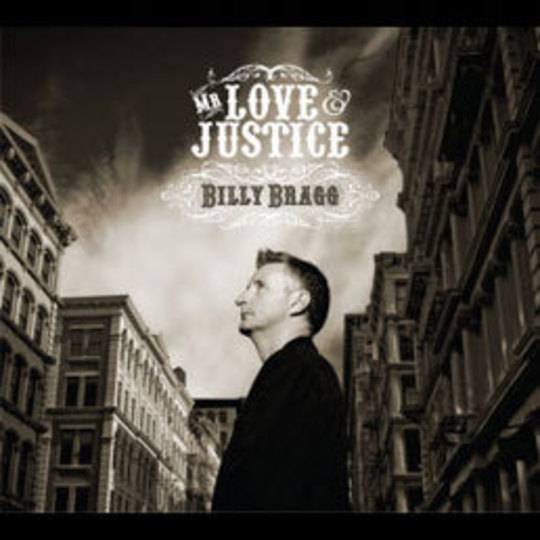 The times they are indeed a-changing, and so it seems is Billy Bragg. Sadly, on the evidence of Mr Love & Justice, it would be difficult to put forward a resounding argument that this change is for the better.

Bragg has always been seen as some kind of spokesperson for the downtrodden, the under-achievers, the working classes. In his earliest solo recordings over two decades ago he had plenty to be angry about: the Falklands, the impending miners’ strike, Margaret Thatcher and her tyrannical reign in general. Back then, his trade union beliefs and working man's idealist stance was a breath of fresh air to a society that had been swept away by avid consumerism, and a selfish arrogance perpetuated by its appointed leader and her blue-rosetted battalion.

Since then Bragg has led from the front, appearing at rallies for pretty much every given cause known to man, whether that be politically, racially or sexually motivated, and occasionally not even directly concerning the "England" which he so vehemently sang about in the past, as his 'The Brightest Bulb Has Burned Out' collaboration with Less Than Jake on 2004's Rock Against Bush compilation testifies.

But what happens if there is nothing left to protest about? Or, worse still, the vehicle you've spent nigh on twenty years trying to promote turns out to be worse than the atrocity that got you on your soapbox in the first place? Well, you could always go off into deepest Americana and record with Jeff Tweedy and Wilco, or just bury your head in the sand perhaps and forget the whole thing never happened. Just another nightmare to add to the long list that keep you awake night after night, yeah?

When it comes down to the nitty gritty, to me Bragg is synonymous with excruciating, rain-sodden trips to places like Swindon and back. Forget the historical odes and TUC rallying cries for a second, and imagine what it must be like to endure a three-hour cross country journey at the hands of a driver who, as an avid Billy Bragg fan, insisted on playing selected ‘highlights’ – if you can call them that – for the entire duration of the journey. Torture is a word that really doesn’t do that experience justice.

Which brings us to the whole point here: Billy Bragg, sadly, doesn't really have one in the 21st Century. While there can never be any doubting Bragg’s overt sincerity, even the musical virtuosity of one-time Small Face Ian MacLagan can’t save Mr Love & Justice from being just another collection of largely self-pitying, badly-worded laments that quite frankly aren’t in the same league as the likes of ‘Between The Wars’ or ‘A New England’ and probably wouldn’t have even made it onto the compilation CD for the return journey, let alone the initial three-hour marathon.

That's not to say this album is all bad. 'If You Ever Leave' is a maudlin ballad that focuses more on the more personal aspects of the writer than any socially administered consequence, while 'O Freedom' and its casually repeated refrain of "What liberties are taken in thy name?" suggests Bragg still has some fire left in that belly of his, but on the whole Mr Love & Justice is an album that sounds like it was made for the sake of it rather than to cascade any real statement of intent. You have to say, on reflection, maybe it's one record too many for Billy Bragg.

From The Valley To The Stars