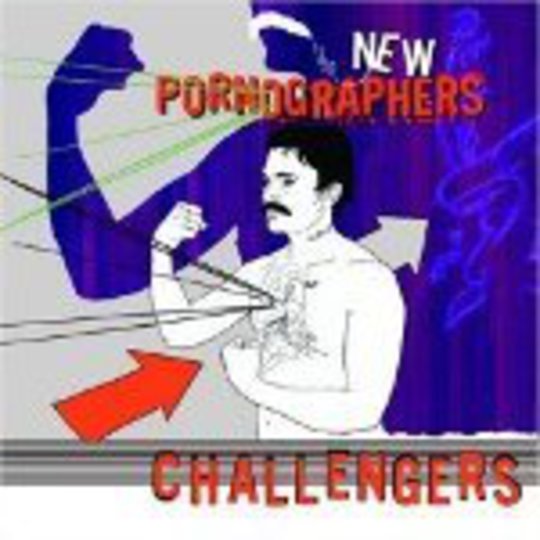 Indie supergroup and friends of The Shins they may be, but for Vancouver octet The New Pornographers it's taken the best part of a decade for most people outside of their home territory to notice their output.

Although their material was pretty rare until a few years ago, their often sporadic but quite definitely measured style of melancholia has been quite constant in recent times, and Challengers actually represents their fourth long-player of the decade.

Following on from 2005's roundly heralded Twin Cinema, Challengers could be defined as being a more polished continuation of its predecessor. Polished in terms of production value at least, as band mainstays AC Newman and John Collins find themselves aided, abetted and quite possibly guided in the main by Phil Palazzolo, whose most recent acquaintances were Modest Mouse on their recent We Were Dead Before The Ship Even Sank_ album.

Certainly there is a hint of the ‘Mouse on Challengers, with the absurdly jolly 'All The Things That Go To Make Heaven And Earth' raising more than an eyebrow in its similarity to the aforementioned Johnny Marr-featuring act. That is not to say The New Pornographers' identity has been lost here, of course. Far from it, in fact: something that makes this record even more fascinating than any of its predecessors is that, for once, it doesn't sound like an AC Newman solo record – a cast of thousands add bit parts here and there. Individual members of the troupe are given an opportunity to shine in their own right, and some of them grasp the mantle with open arms and clenched fists.

Neko Case's vocal performance turns the epochal 'Go Places' into a charismatic ditty that some of the most feted artists doing the rounds right now would murder granny for, while Dan Bejar's oscillating Pixies-esque quaker 'Myriad Harbour' raises its head above the parapet as the standout song on this record. It also manages to make at least one person - namely me - check out his solo project, Destroyer, almost immediately.

Sure, the songwriting talent of Newman should not be underestimated either, most notably on the title track or the aforementioned_ 'Go Places'_. A special mention must also go to the complexity of the arrangements which, although not quite matching the pulsating standards set by Arcade Fire, manage to sound larger than life and twice as beguiling as your regular bass-drums-guitar combos could ever dream about.

For long-standing fans of The New Pornographers, Challengers will almost certainly be greeted with the fervour and enthusiasm of a toddler taking its first steps across the living room carpet. To the rest of us, while no one can argue that it’s not an accomplished and distinguished collection of songs, the doubts still remain - albeit fainter than before - as to why one would choose this collective over at least half-a-dozen similar-sounding yet ultimately superior bands.