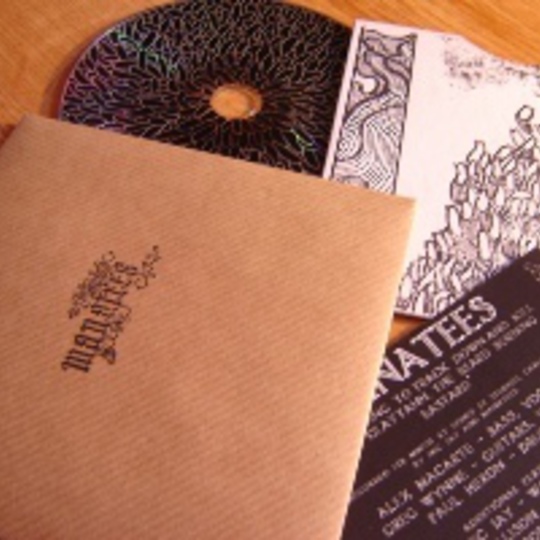 I don’t expect you to go out of your way to find this (your mind, maybe), and even if you tried you’d probably fail. It’s one of those rarities, a hand-numbered, limited-edition offering that really _is_ limited. And hand-numbered. Yes, you’ll find it online and at its makers’ shows, but said act don’t really do all that many gigs. And it’s to Manatees' credit that they don’t. Pat their backs and shake their hands – if they were on the road every weekend there’d be little need for any other acts of their ilk to bother setting up for a night of second-rate rocking.

And that ilk, exactly? Questionable and open to debate but undeniably loud. This cacophony is something you feel even with the volume down; close the curtains and dim the lights and let it lift you clean out of your seat and up into an otherworldly state of mind that so few cosmic travellers have ever traversed. King Crimson, Sunn O))), Comets On Fire: there are elements of these acts here, but they’re distorted, radiation from some collapsing star speckling them with an alien fire that burns harder and faster than this band’s slow-motion approach to ear-shredding alludes to initially. There’s a rawness to these five songs that comes on like a rash; it itches, infecting the skin and later the senses until the body is powerless to do anything but nod itself in time to the thundering drum beats and snarled vocals.

Some of which, incidentally, come courtesy of Oxbow’s Eugene Robinson. Suitably-cum-predictably unhinged, he who is so often unclothed come a show’s end lays down the incomprehensible like it was gospel; around him, churning soundscapes twist colours from convulsing rocks, reds and yellows, blues like those of a flame unattended, licking from a Bunsen so full of science lab-destroying promise. Although not as instantaneously gratifyingly intense as its predecessor, the wrongly-untitled debut reviewed here, there’s an enveloping subtlety that eventually permeates any resistance initially erected to We Are Going To…’s layered unravelling. It doesn’t grab you from the off, but that’s a quality that lends itself wonderfully to spades of longevity.

The closest they’ve yet come to capturing the jaw-dropping spectacle of their live set, the Carlisle three-piece’s latest release is another step towards the establishment of Manatees as these isles’ greatest exponents of Isis-ish Neurosomethings. But it also exhibits confident potential enough to suggest that the trio can, eventually, outshine even the acts dominating the field they have chosen for the sowing of their oats. See them live at your earliest convenience and buy this actually-limited-edition release while you’re there. If you’re disappointed, DiS will present you with a full refund. After pulling out your liar's tongue, that is.