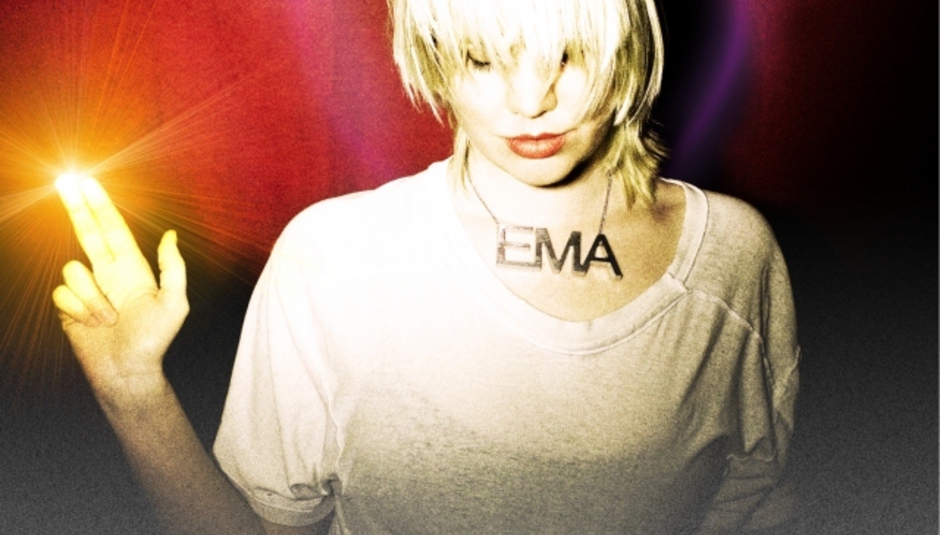 A rare 'DiScover' recommendation from DiS...

Peeling back a few of those pixelated layers that burdens the intimacy of a lot of modern music, Erika M. Anderson (yes, you may recognise her name from cult-duo Gowns) aka EMA, manages to dive straight for that part of your heart that wibbles when Cat Power strums the first few chords of 'Nude as News' and opens her mouth, and the troubles of the world vanish, until the song stops. There's a sort of lust for dust and cobweb bedraggled texture to much of EMA's soaring drones and sprawling notquitefolk. On first listen to her forthcoming album Past Life Martyred Saints, my mind drifted into the backseat of car rides with Julianna Hatfield blasting before my thoughts started detouring into smoke-filled rooms, with Evan Dando on the stereo. But there's something not quite as mid-90s post-grunge as that makes this sound. It's not so much a dingy vibe but there's a definite clamminess in the air to these songs. The guitars sound like they've been foraged from a forest floor, their sound softend by the moss. However, at any given moment, as a looming darkness descends, layers of vocals lift the mist and gloriousness tumbles to crescendo.

Take for instance debut single 'The Grey Ship' which has been festering in the TV static of Moldy Peaches' front-room but grows over it's seven minutes and eighteen seconds into Deerhunter peering through a stain-glassed window, mouth agape, as Patti Smith and Ariel Pink jam. Not only that but when you open up her blog (http://cameouttanowhere.com), you're sucked into an ornate vortex of, well, a true artist, whose not just making songs but building a planet for us to inhabit.I mean, just look at the way she explains 'The Grey Ship':

...for a long time I’ve wanted to make a piece that changes fidelity in the middle of the song, from lo-fi to hi-fi. I imagined it being like when Dorothy opens the door to Oz and the whole world turns from black and white to technicolor.

So the first part of this song is recorded on a 4track and it’s sposed to be kind of a hippie song about aliens. And then the bass drops and electronics come in.

EMA - The Grey Ship by souterraintransmissions

The b-side to that single is this 17 minute cover of 'Kind Heart' by Robert Johnson, for which she scripted out a graphic score, like a map, to make her own picture of how it should be produced and then managed to hack Soundcloud so you could see how she hears it...

Anyway, you may very well already have heard those two. Here's her Danzig cover as trailed in the headline, which is taken from a forthcoming low key 7” release on Hell, Yes! records...

EMA "Soul On Fire" by HellYes

And this is her brand new video for 'California', taken from her forthcoming debut album...

And if you're not 'sold' already, she's here for a few dates in May. You'll likely find a gaggle of DiS scribes following in her wake:

Past Life Martyred Saints is released on 9th May 2011 through Souterrain Transmissions.