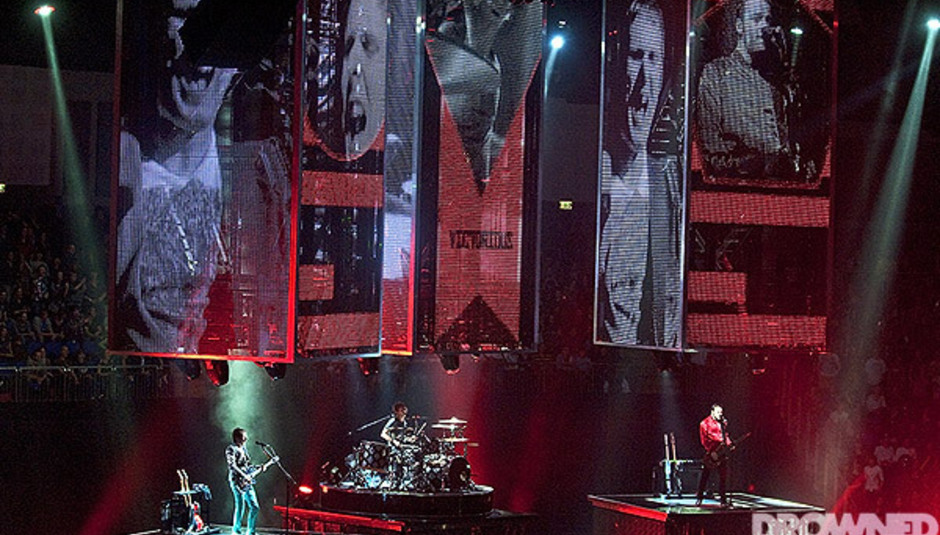 Glastonbury preview part 2: what to see

As DiS’s own Michael Dawson, thanks to my relatively late call-up to cover Glastonbury, there’s been no small amount of last-gasp poring over flipcharts, GANTT graphs, reading tea leaves, throwing bones etc. etc. as I try and deduct who the chuff I’m going to see over the festival’s duration. Plus, as it’s my first time, all of Wednesday and probably Thursday (and maybe even some of Friday) will most likely be spent wandering about gawping to no-one particularly interested that 'cripes, it’s even bigger when you’re actually here isn’t it?' Aside from that though I’m going to aim to see at least a handful of acts per day - that is if my brain doesn’t get turned to mush by the sheer logistics of it all (that’s what they call drinking these days is it?) The following is likely to be as clear as mud (b‘dm tsch) but does attempt to narrow down the many directions in which the next few days could take…

Arrival! And general wandering around thinking up rumours to spread around the site ('The Strokes are playing!' 'Cold Feet’s John Thompson’s died!') Of course, if you’re a bit more Glasto-savvy than me you’ll probably have marked your spot, met with various folk and started soaking up the anticipative atmosphere. There’s not too much knocking about in the way of music today - though saying that, no less than eight stages already boast line-ups. The pick is probably the Tadpole/Green Futures stage, which hosts an acoustic/folk-filled bill, the highlight being hugely promising chamber group Wap Wap Wow (on 7pm.)

The Queen’s Head is apparently the place to be for a pre-Glastonbury welcoming party, though the buzz of hype may well drown out the acts actually playing. Two Door Cinema Club, Egyptian Hip Hop, Chapel Club and Local Natives (6pm-10:30pm) have all received their fair share of attention this year, despite none of them being particularly inspiring. It gets better later on though, with much hand wringing over deciding between Silver Columns (Magic Bubbles, 11pm) and Joy Orbison (Wow!, 11:30pm.) Anyone deciding to go silly before things have properly got going, meanwhile, should head to The Park for Glasgow dance institution Optimo (The Park, 1am.) And if none of that takes your fancy there’s always Boy George… (Wow!, 9pm.)

Today’s all about Rolf Harris (11am) of cou- no, it’s not. The, erm, wobble board virtuoso does open proceedings on the Pyramid Stage, but instead why not get a couple more hours shut-eye and kick things off with tUnE-yArDs (1:15pm) at West Holts - formerly the Jazz/World Stage; heck you could even stay there for The Bronx’s quite brilliant Mariachi El-Bronx side-project (2:45pm) and downbeat/trip-hop stalwart Bonobo (4:15pm.) No? Okay then... well choosing between the understated Jesca Hoop (BBC Introducing, 1:45pm) and comparatively brash Beth Jeans Houghton (The Park, 2pm) should increase Friday morning’s headache, with Goldheart Assembly’s (Avalon Stage, 3:40pm) rousing harmonics a fine compliment to either. Partly to please DiS founder Sean Adams and partly because their French electro-pop is ace, Phoenix (Other Stage, 4:30pm) are surely unmissable ('but I thought you said you’d be at Bonob-' Oh shush,) though if, for whatever reason, they’re not floating your boat you could instead see the summery math-rock of Tubelord (Queen’s Head, 5pm,) or the D-O-Double-G himself, Snoop Dogg (Pyramid, 5pm) - the only time those two will ever appear in the same sentence.

Fancy experiencing the musical equivalent of a limp handshake? Go see Vampire Weekend (Pyramid Stage, 6:30pm,) in reality though you could actually take a breather at this point and get back to it with either Hot Chip (Other Stage, 8:30pm) or Delphic (Dance West, 8:45pm;) OR see who the ’special guests’ are going to be at The Park (8:30pm) - exciting! Whoever could it be!? Hawkwind? Mike & The Mechanics? Terrorvision? I just don’t know, though Jamie from Klaxons (midnight, The Park) does DJ a few hours later, just saying…

The headliner’s a tricky one. Do you go for the Flaming Lips’ (10:30pm, Other Stage) mostly sumptuous back catalogue and collage stage sets, or do you pick stand-in headliners Gorillaz (10:45pm, Pyramid Stage) with their expected string of guest collaborators (Snoop Dogg‘s surely getting involved?) Or, do you petulantly refuse to make a decision and go and mellow out to The Orb (10:30pm, Cube Henge) instead? I cannot guide you on this. Though I’ll probably not be at The xx (The Park, 11:15pm.)

Call me cynical, but I can’t help but feel that the Lightning Seeds (Pyramid Stage, 12:20pm; Avalon Stage, 11:25pm) appearance might have something to do with the fact that England should (sigh) be playing their World Cup 2nd round match today - Baddiel & Skinner to make an appearance? Will any of us really care? Festivals are a place to go to escape 'the outside world,' the World Cup at the moment very much represents 'the outside world.' Here We Go Magic (11:50am, The Park; 5pm, The Queen‘s Head) present a much more preferable morning starter, whilst Suns Of Arqa (1:15pm, The Glade) offer a lunch filled with woozy Eastern sounds and dub rhythms. They’d be a must, but for a brilliantly out of place appearance on the Other Stage by emo-prog metallers Coheed & Cambria (1:20pm); anyone worked out the plot to their concept albums yet? Me neither. Meanwhile Cymbals Eat Guitars (1:05pm,) give the John Peel Stage an instantly more appealing allure than it had yesterday (seriously, would the great man have liked ANY of Friday’s line-up? Go judge for yourself…) In fact with Field Music (2:15pm) and Wild Beasts (3:30pm) proceeding that you spend the afternoon there, though that would mean missing the unheralded chamber-cum-math pop of Dog Is Dead (BBC Introducing, 2:55pm) and dream-pop duo Beach House (The Park, 4pm). BBC Introducing comes alive today with the wistful melancholia of Lanterns On The Lake (4:50pm,) Mancunian electro-upstarts May68 (7:05pm) and current nominees for ’Having The Best Freakin’ 2010 Ever’ Pulled Apart By Horses (7:50pm); a shame then that I, probably like many reading this, will instead be in thrall to The National (5:20pm, Other Stage.) From there, though, you can go and shout “Shakira Shakira!” at, yes, Shakira (Pyramid Stage, 6:45pm) or watch Foals (7:30pm, John Peel Stage) and their newly found expansive sound (so much for complaining about all that reverb on Antidotes, eh?) while Billy Bragg (9pm, Leftfield) is never less than worth your time.

Then it’s headliner quandry again; y’see, really I should be at either George Clinton (9:45pm, West Holt) or Midlake (11pm, The Park.) Sadly though, you’re reading the ramblings of a man who, as a 13 year-old, once submitted a FORTY-FIVE page - plus mixtape - piece of homework on Muse (10:15pm, Pyramid Stage) for a music project. Like supporting a football team, I’ve been attached helplessly to them, that ever irritable constant: 'the band I grew up with.' Slowly I’m wrestling my teenage-self’s grip from them, and they‘re doing their part by releasing stinker upon stinker. This is the final face off then; an anticlimatic Glastonbury headlining slot featuring almost nothing from Origin Of Symmetry and everything from The Resistance could prove the final exorcism. Expect to find me weeping at whatever result my head and heart determine round about midnight.

So, after last night’s burying of my teenhood memories, how do I pick myself up on Sunday? Well, Welsh nu-gazers The Joy Formidable open the Other Stage today (11am,) which is damn excellent. Also excellent is the afternoon line-up for the John Peel Stage - indie oddballs Everything Everything (1pm), bassoon-loving These New Puritans (2pm) and frantic krautronica-types Holy Fuck (3:10pm); you’ll have to leave the latter early though if you want to swoon at Ed Droste’s quite magnificent voice as part of Grizzly Bear (Other Stage, 4pm.) Some of you, on the other hand, might fancy some quintessentially English tales from quintessential Englishman Ray Davies (Pyramid Stage, 4:15pm,) before we all re-convene for Gang Of Four’s still vital post-punk (John Peel Stage, 5:45pm.)

From there you could watch either Loudon Wainwright III (Acoustic, 7pm) or Arthur Brown (Glade, 7:30pm) and spend the rest of the evening telling anyone within earshot that 'he’s still got it.' However, I’m more likely to be found watching DiS favourites Broken Social Scene (John Peel Stage, 7:15pm) - we might’ve mentioned that they’re helping us celebrate our 10th Birthday once or twice… Faithless (8pm, Pyramid Stage) have, as usual, popped up high on the bill despite not knowingly doing much of late, and find themselves coming head to head with an LCD Soundsystem (8:30pm, Other Stage) cruising around the victory lap of their career.

And so the festival finishes with a band synonymous with Glastonbury Festival. Sure I could mark the ‘legend’ checklist with Stevie Wonder (9:45pm Pyramid), or Orbital (10pm, Other Stage;) I could pretend I’m into Four Tet (11pm, Wow!) enough to want to see him end my first ever Glastonbury. In fact, though, I’ll be pogo-ing around with people twice my age to the Levellers (10:30pm, Glade) and pretending for an hour or so that I know what the hippies mean when they say “the festival isn’t the same as it used to be.”

So I‘ve shown mine. Show me yours.