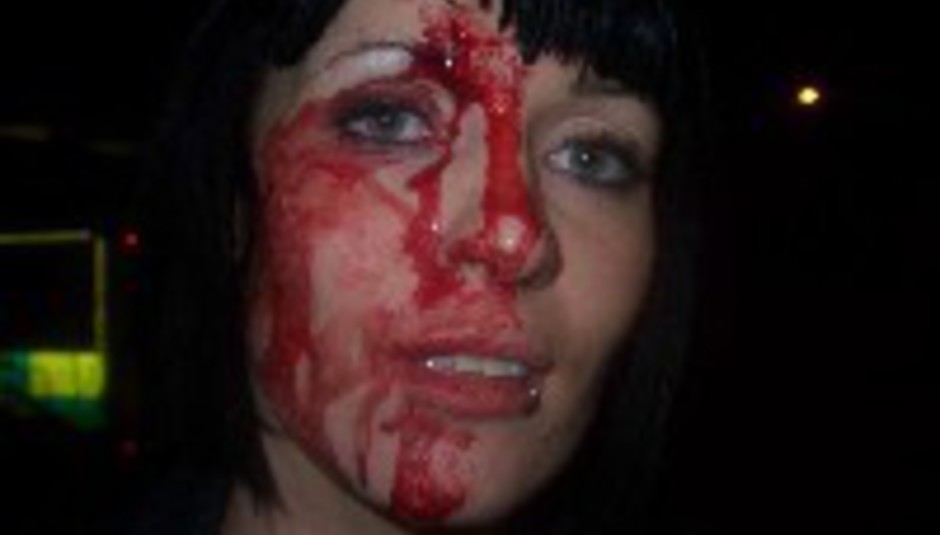 Bring Me The... head of the person that did this.

It seems emo/screamo/ridiculous in the extremo combo Bring Me The Horizon have been, shall we say, upsetting a few of their devoted fans this past weekend.

On Saturday night (April 7th), the band played a show at Nottingham's Rock City, and obviously full of bravado and excess afterwards, got talking to one or two local female followers.

Anyway, as described by an employee of the venue, the following incident allegedly took place:

_"After the gig two girls tried to get on the tour bus. Later on, the singer, Oliver Sykes, tried it on with one of the girls. When she said no, he called her a dyke and first pissed on her before him and the rest of the band threw her and her friend off the bus. Once off the bus someone within the band through an empty bottle of Jagermeister at the girl's head resulting in this... (see picture).

"As many of you will already have heard there was an incident concerning the band on and around their tour bus in Nottingham in the early hours of Sunday Morning (8th April). As to be expected, in the age of the internet and web boards, numerous versions of the alleged incident have been posted online - Bring Me The Horizon and Visible Noise would like to clarify the situation. Oli Sykes was arrested and will appear in court on Friday charged with allegedly urinating on a female fan inside the tour bus, which he strongly denies. Oli has not been charged, nor has ever been questioned or been under any suspicion of attacking the aforementioned female fan. The alleged incident is being dealt with by the relevant authorities currently and a formal statement will be issued once Oli has attended his court appearance on Friday."

The band's MySpace blog on the incident, and the comments beneath it, can be seen here.