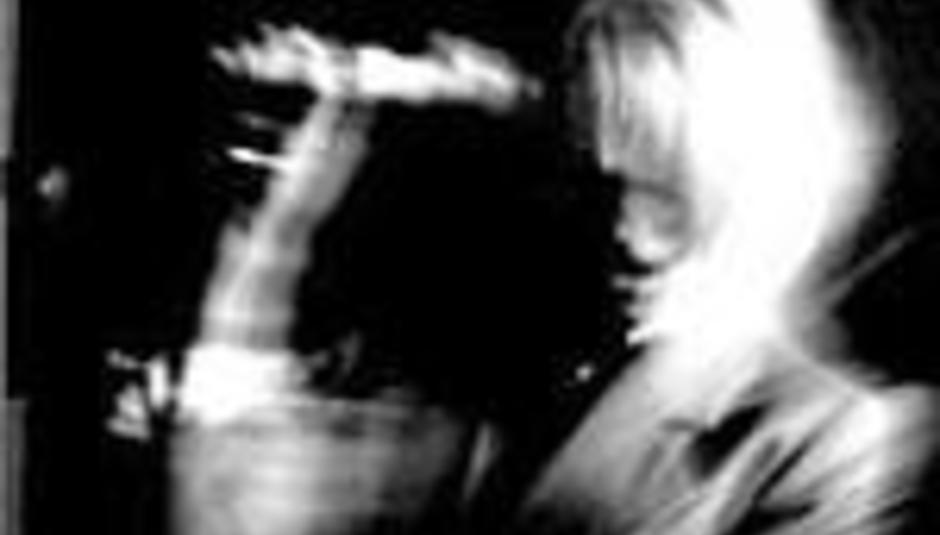 The Violets: "Music is a romantic glimpse of another world: OUR world."

The Violets: "Music is a romantic glimpse of another world: OUR world."

London’s theatrical punk-delicate practitioners The Violets are one of the most exciting bands to emerge from the once-much-hyped (and admittedly possibly non-existent outside the minds of the bored and the over-excitable…) New Cross scene. Creating a seamless and seductive image for themselves, they’ve erected a spiky borderline between their own monochrome, starkly-lit world and the fuzzy-edged sepia tones in which many bands are all too content to portray themselves. When you marry this uncompromising, stylised glamour to the surrealist imagery of their lyrics, you get a musical style and an aesthetic which are so divorced from the mainstream as to feel somewhat otherworldly. Couple this with a electrically confrontational live show, a guitar sound which seems to see feedback as just another option in the chord progression and vocals which soar and spit like Siouxsie Sioux etched in glass, and you have something hypnotically exciting.

Since forming almost by accident towards the end of 2003, The Violets have released two singles on Angular Records, played a multitude of gigs, gathered the odd bit of radio air play and were recently witnessed touring alongside White Rose Movement.

Exciting times for The Violets, it would seem, which means that now is the perfect time for DiS to ask the band to convey the thoughts behind the aesthetic, starting with the sense of unusual, alien glamour and the otherworldly qualities of their music.

Is this escapist surrealism a deliberate stance?

Alixus (singer): Absolutely! I like the glam rock ethic which says that music is a romantic glimpse of another world: our world. We don’t want to get stuck in this boring, snoring, realist world that all the bands like Hard-Fi are talking about. “My day job sucks” – that is their statement! “My day job sucks…
Joe (guitarist): …And I use cash machines!” I like songs which are about what could be, rather than about what is. I think the last word on all that – for, me anyway – was The Jam.
Andrew (drummer): They covered it all in 1982…
Alixus: …and we’ve got to end it.

Lyrically, The Violets’ rejection of day job/nightlife/cashpoint/relationship realism takes the form of very abstract words, full of strong imagery which paints a series of snapshots in your mind but never quite brings them together. It’s somewhat like looking at a scene through a keyhole; you get the fleeting glimpses of a world, picking up on the atmosphere of the scene but not being able to join the dots together. Which is an intriguing, thought-provoking way of getting ideas across.

Alixus: Yeah – it’s not intentional actually. I mean… I don’t like the idea of sitting round the pub and scrawling my lyrics on the bar mats – I put more thought into it than that. But… it comes out that way, part of the sum total of some stream of consciousness. I do like to focus on individual ideas, on highlights: I like that you can just say one word and people will get the idea of what you’re trying to say, just with that one word. You don’t have to spell it out.
Andrew: I like songs you can have your own interpretation of, rather than lyrics which tell you exactly what the song’s about. I know the writer has their own idea about what the song’s about, but I want people to have their own personal meaning for 'Descend' and 'Carnival'. To associate that song with their own memory, or something that’s going on in their own minds. We’re not going to tell you what it’s about – it’s up to the listener to decide what it’s about for them.
Alixus: Exactly. And it’s partially an accident, the ambiguity – but then we thought, well, we’ll leave it that way.

Sketchy, snap-shot lyrics; black and white clothes; monochrome single covers; a stripped down, staccato sound… The Violets have a very minimalist and rather stark aesthetic. How deliberate was this uniform austerity in their image?

Andrew: I think it’s important to try and have an aesthetic – I think it shows that you’ve made an effort and have respect for the audience.
Joe: I dunno why it’s all black and white though… I think the music sounds quite monochrome - but it’s like Alix was saying about the lyrics; sometimes there’s a little bit which’ll paint a picture or create an image which suddenly brings a bit more colour into it – if I’m going to use this metaphor! And then, in the same way, the music has the bits which’re slightly more avant garde, like the delay pedals, that make the music more colourful and take it away from that rigid, staccato and striking sound. That’s what we do a lot of the time.
Alixus: We’re also quite theatrical, and the aesthetic is a part of that.
Andrew: My take on it is that the image always goes hand in hand with the music. All of the best artists, like David Bowie, they all had a really strong aesthetic.
Joe: I suppose a lot of other bands wear really colourful clothes…and then say: “Oh, we don’t have an image, we just go out there and don’t think about our clothes” – they do think about the clothes they’re wearing.
And by having an aesthetic you’re making it clear that you do think about what you’re trying to get across; making explicit the difference between you and them.
Joe: Well, we’re not the only ones – a lot of bands are like that.
Alixus: Yeah – I think we’re seeing the small end of something kicking off, and we’re part of that.

So how would you define this thing you feel you’re part of – what reference points do you feel it has?

Joe: Not baggy jeans! It could be lots of things, anything: photos, lots of other music – although that’s always changing. Things which are a bit kind of under the surface. Anything which sounds like a slap in the face, really, is the music which I like.
Alixus: And I’ve always been attracted to an empowered voice – an empowered, androgynous sounding voice like Nico or women who can do something that’s kind of grotesque. I guess our sound has that sense of androgynous liberation.
Andrew: One of my major reference points is dance of Days, Mark Jenkins’ history of the Washington punk scene. The message I got from that book was that punk is like a lifestyle choice, a way you operate, something you live with. And when I get up in the morning music is the first thing I think about; it’s the last thing I think about before I got to bed; it’s my everything. So that’s my reference point.
Joe: I suppose that’s what we’re aiming for…
Alixus: …we want people to be like “Ooh, yeah!” And even though people interpret it to mean different things, we also hope there’s a sense of authenticity about it – that’s where the punk bit comes in. Something that really matters – a religion, a celebration! We did a gig in Southend last night and everyone was completely up for it. They didn’t have the same attitude that we do… like… they were just really enjoying themselves and getting really excited. That’s what this single’s for – people hear it and relate to it and be inspired and react to it. Seaside towns get it.
Joe: Yeah – it’s for people in seaside towns!
Andrew: It’s for people who like looking out over the ocean and being on the edge of the world.
Alixus: And we’re bringing that to the heart of the city!

If you live in a seaside town, would like to live in a seaside town, love the sense of infinite horizons you get from looking out over the sea or are simply in love with intelligent, important rock’n’roll, then you may be interested to know that in March The Violets are on tour supporting The White Rose Movement. For details, check out theviolets.co.uk.