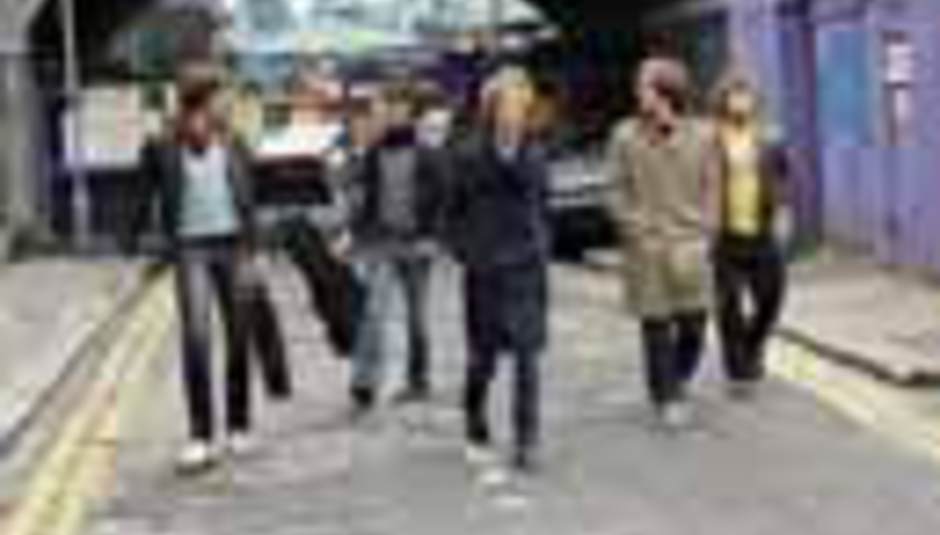 The Paddingtons: Hell, Hull And Happiness

The Paddingtons: Hell, Hull And Happiness

Few of their detractors dare admit it but one of the biggest success stories this year has been the rise and rise of The Paddingtons. Emerging on the back of the DIY gutterpunk scene inspired by The Libertines and feted by the likes of The Others, the Hull five piece have usurped Dominic Masters et al, quietly going about their business whilst selling out venues and a shedload of records up and down the land.

Currently on tour with The Bravery, I met up with guitarists Josh Hubbard and Marv Hines after their explosive set at Nottingham’s Rock City didn’t so much divide opinion as merely separate the men from the boys as it were. An unlikely alliance then, as New York meets Humberside, and possibly the best place to start the conversation.

“They are really decent lads to be honest,” admits Josh. “I didn’t know what to expect after what I’d heard people say about them, but some of our friends (The Five O’Clock Heroes) had played with them and said they were sound. I mean, they do like to keep themselves to themselves but once you get to know them they’re fine.”

This time last year not many people – and particularly those not hooked up to the Internet – would have heard The Paddingtons. In that time they’ve risen from being one of the “guerrilla gig scene” bands into one of the most exciting bands in the country. Josh Hubbard is particularly keen to pay homage to the power of dot.com

“It certainly helped us, didn’t it?” he admits. “When we first started, we get ourselves a manager and we were all on the Libertines forum for hours at a time. There were kids all over the country using it and that’s where bands started being formed, and then the next thing these new bands were putting MP3s of their songs on the forum, and one of them was us. Me and Tom (Atkin, lead singer) would download and listen to everyone who put their songs on the forum – it’s the best way of finding anything new isn’t it? – and then eventually we’d created our own forum and put links to it via the Libs’ forum and word just spread from there on in.”

Does it annoy you now though when people find the album four weeks before it’s released on a file-sharing network though?

“It’s inevitable though isn’t it” replies Josh. “ I wasn’t that happy when I found it online and even less so when I found how it had got there – some journalist put it online and then went and sold it on ebay – so it’s not even one of our fans.”
“At least more people will get to listen to it on that kind of network,” adds Marv.

Did you manage to track down which journalist(s) had actually put it online?

“It’s hard to do that. Virtually impossible in fact. Same with the copies on ebay. Short of us going out and buying them ourselves we’d be none the wiser,” says a rueful looking Josh.
“…and the bottom line is that we need to get the advance copies of our records out early so people can form an opinion of the music rather than just read some bullshit about who we knock about with,” adds Marv, referring to the band’s overly publicised relationship with Pete Doherty.

On the other hand though, The Paddingtons do agree that the Internet has helped regain some of the power back for musicians away from the greedy mitts of the record companies.

“It’s given us a degree of freedom to be able to put out our own stuff and without it Alan (McGee) would never have been in a position to sign us…” purports Josh, gratefully.

Ah. Alan McGee, founder of Creation Records, some would say godfather of the whole indie revolution and discovering force behind the likes of Oasis and My Bloody Valentine. Nowadays of course, he’s the main man behind Poptones, The Paddingtons’ record label, and as Josh Hubbard explains, the band owe him a great debt, not least for the lack of constraint over what and how the band sound like.

“He’s a really sound bloke. Basically, the first thing he said to us after we signed to Poptones was “Do what you want, and if you go wrong, I’ll tell you.” He’s given us loads of good advice about what he thinks we should be doing. Before he signed us he said he really wanted to put ‘21’ out as the first single, and the fact that he was the man who discovered Oasis really swung it for me. At the time we were talking to one or two well-known independent labels but no one could match Alan McGee’s enthusiasm for the band. After we signed he told us what he wanted to put out and why and at the end of the day, you’ve got to listen to what he has to say – I mean, he’s Alan McGee and we’re five kids from Hull! And then through him we’ve got to work in the studio with the likes of Johnny Hopkins and Owen Morris. He also expects you to give your opinion back to him and if we disagree on something, there’s no “I’m the boss, I’m always right” attitude either.”

The release of The Paddingtons’ debut album ‘First Comes First’ last month was met with a host of positive reviews from a largely sceptical media, previously more concerned with who the band were hanging out with. Again, the band are pleasantly surprised by all of this, although at the same time quite scathing of those who seemingly pay no attention to the band’s music.

“We won’t hold a gun to people’s heads and say you should like us” declares Josh intently, “but when the only thing some of these second rate journalists are bothered about is what fashionable parties we might be playing or what kind of lifestyle we might be living – what right have they got to criticise us on our music when they obviously have no interest in the first place?”

Swiftly moving onto the fact The Paddingtons were recently asked to do a photo shoot for Vogue magazine, I asked them how does it feel to be seen as fashion icons?

Back to the songs, and The Paddingtons really do work as a band rather than [INSERT NAME HERE]’s backing band, with songwriting duties being spread among all five members.

“A lot of the songs come from Lloyd (Dobbs, bass player). When we first here them they are just riffs or hooks, and then the rest of us tend to mess around with them, like myself and Marv will put some guitar riffs over the top, and then the lyrics will be put in later, mostly by Tom, but all of us have contributed a few words here and there” offers Josh.

With only The Housemartins and The Beautiful South as it’s musical benefactors, it’s probably fair to say that Hull isn’t the most notable place to be for a new band when they’re just starting out. Nevertheless, as Josh explains, The Paddingtons did actually get more support than anyone could have bargained for in the beginning.

“A lot of the venues in Hull are just small clubs and pubs really, and when we started a lot of the city’s music scene was still going through it’s nu metal and grunge phase. We used to turn up at local band nights where most of the kids would be wearing Limp Bizkit t-shirts and play Strokes, Undertones and Sex Pistols covers, which most of the kids didn’t really get, but the promoters loved it. Some of the first gigs we ever played, we were really bad, but I think what people liked was the energy we had on stage and the fact we were really different to every other band in Hull at the time. It wasn’t long after that a guy called Steve Bedlow – Scarborough Steve, the original singer with The Libertines – saw us play and took us down to London to do some gigs.”

Recently voted as the worst place to live in the UK – some achievement considering Mansfield came in at number six – I felt it was only right to ask the band whether or not their home town really was as bad as Channel 4’s portrayal or just another way for London media types to extend the north/south divide. Marv Hines gives me the forthright view that I was half expecting.

“It has to be said that Hull is pretty shit. We have the highest rate of teenage pregnancies in the UK, a number of dodgy council estates – Bransholme, for example – where you wouldn’t dare venture day or night unless you were a bit simple. Bransholme was recently categorised as being home to the fattest people in England! We also have the honour of being home to the place that had the first DOG to be awarded an ASBO! When you think about it, it’s obvious why we got voted worst city, although if you came to hang out with us, you probably wouldn’t see half of that as we tend to avoid most of the swanky areas.”
“The thing is though, we do have some bad estates and that was probably the major factor why we were voted worst city but if you go to the wrong estates in Manchester, Nottingham, Bristol, London, you’d probably end up being shot, and then you’d come to Hull and maybe get chased and given a good kicking but you’d still wake up the next day,” adds Josh. “I can understand why Hull’s got a bad reputation but it’s not that scary. It’s nowhere near as dangerous as a lot of other places in the UK.”
“The other day I was walking down our road and someone shouted at me to get my hair cut,” says Marv, “so I just told him to get a new pair of trackie bottoms!”
“That’s it, I mean have you ever been to Stoke?” asks Josh. “Shithole…or what about Middlesbrough?”
“Shithole!” replies Marv.
“…or Wolverhampton?” retorts Josh.
“SHITHOLE!” spit the pair of them, almost drowning each other out in a united display of vitriolic emotion.

So where is your favourite place to play?

“I would say any small town where they don’t normally get bands like us playing and so they don’t know what to expect” answers Josh. “I’d even say Hull, because it is always pretty chaotic when we play a home gig these days.”
“Anywhere and everywhere in Scotland for me” adds Marv. “Whenever we’ve played there everyone has just gone along to enjoy the gig. There are no poseurs, no bullshitters up there, not in Scotland.”