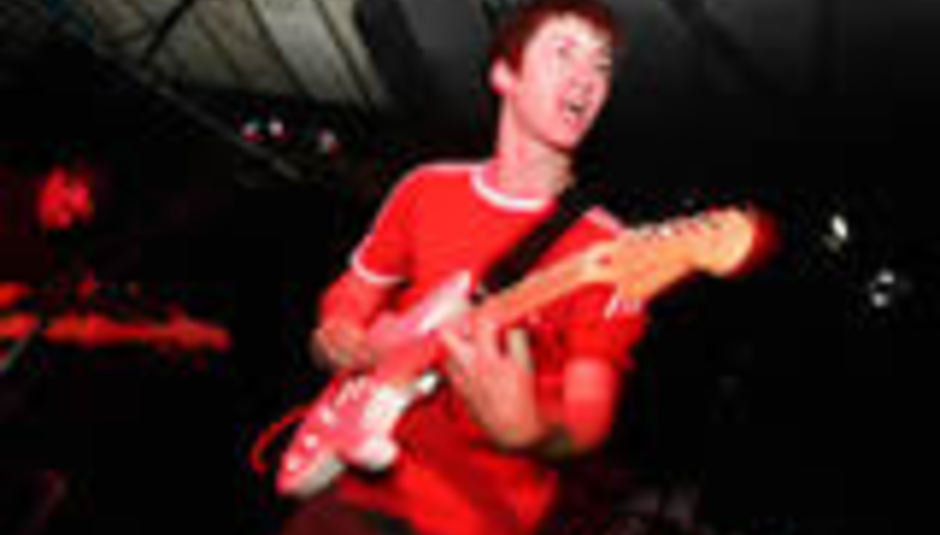 24 hours later, the Arctic Monkeys have the number one selling single in the UK. That’s NUMBER ONE. As in the real charts like. The one that Radio One and Top Of The Pops use. What’s even more astonishing is that less than six months ago, the Sheffield four piece were unsigned, yet now they’re selling out four figure capacity sized venues such as this one (The Plug) in their hometown. Tonight’s tickets – face value £8 – are said to be selling anywhere in the region of £40 - £120, depending on whether you get “lucky” or not. Monkey mania seems to be everywhere, not least of all in Sheffield...

Formed approximately three and a half years ago by three school friends – Alex Turner (vocals, guitar and main songwriter), Matt Helders (drums, backing vocals), and Andy Nicholson (bass). Rhythm guitarist Jamie Cook joined a few months later and after two years of deciding who wanted to play what instrument, writing songs and scrapping them, writing more songs and scrapping them, and yes, writing even more, they’ve finally arrived at the number one spot with only their second ever release, the highly infectious stomper ‘I Bet You Look Good On The Dancefloor’.

Everyone, it seems, wants a piece of the Arctic Monkeys, and amidst other sections of the music press are reporters from the Mail, Sun and the Star. As rags to riches success stories go, this has to be up there with Cinderella and Richard Branson. Various Monkeys come and go throughout the half hour I’ve been allotted in their company, usually having been whisked off to do another interview with journalists of a less patient disposition from higher profile “rags” than yours truly. Singing drummer Matt Helders, he of the “You’re dynamite!” interlude during the aforementioned ‘…Dancefloor’, stays throughout.

So, it must feel great to know that you’re outselling the likes of the Sugababes and McFly by over 5000 copies this week.

“Yeah, it’s amazing,” admits the gobsmacked drummer. “This time last year we were playing to four people in a pub in Leicester and now we’re selling out places like the Astoria. Our management said to us a few weeks ago that they were looking for it to go Top 20, and I had a bet with one of my mates that if it goes that high, I’ll play with no shirt in Amsterdam, while if it makes number one, I’ll play in nothing but a pair of football shorts! I’m regretting having that bet now!”

Does it feel strange to see yourselves competing with the likes of McFly and the Sugababes rather than other “indie” type bands though?

“It does, but I think it’s good for music that young kids would rather listen to us than McFly, although there’s no shame in losing to the Sugababes!” decides Matt, with a cheeky grin. “I don’t think we’ll get carried away by it all though. I mean, Crazy Frog had a number one with his first single, and I wouldn’t have thought that the same people who bought that also bought our single, so I don’t think we’re a sign that things are changing.”

All four members of the band still live at home with their parents, something which hasn’t prepared either them or their families for the incessant publicity that goes hand in hand with fame and celebrity status.

“The other day a reporter from a national newspaper was round at my parents’ house and then they went and hassled my Nan, which was a bit harsh,” says a somewhat distraught looking Matt, although when talking about his grandma’s favourite song being ‘Mardy Bum’ because “it’s one of the few that doesn’t have any swearing in it!”, he soon perks up again.

Noel Gallagher has already gone on record saying that there are no decent young bands around to challenge Oasis, yet here you are with a number one single at a comparatively earlier stage in your careers, and now people’s expectations are that the album (due early next year) will be this generation’s ‘Definitely Maybe’.

“Yeah, that’s really flattering,” says the drummer with a twinge of embarrassment. “I love Oasis, they’re one of the main reasons why I got into music in the first place. The difficult part for us is going to be actually living up to the hype.”

Since the turn of the year, and largely due to the fan base the band had built up via their website and its associated forum, the Arctic Monkeys sparked one of the biggest A&R scrambles since the Gallagher brothers first twitched their eyebrows in anger at some lone bedazzled punter in the Hop And Grape. Surprisingly, the band opted to sign for possibly the smallest label in the running, Domino, probably the last real independent force competing in the Sony/Warners/BMG dominated market. Matt Helders takes up the story.

“It was all a bit unorthodox really because we had so many options of who to sign for. We started to narrow it down before the summer but we still didn’t know Domino were interested at that stage, and a couple of months down the line, we were ready to sign for a different label – admittedly I was tempted by the money on offer as it meant I could quit my day job – and then Lawrence from Domino came to watch us at a gig in Stockton. The funny thing was that we knew he was there but he never approached us, so we were a bit pissed off because some of our favourite bands like The Kills, Four Tet and Seachange had recorded stuff for that label, and then the next day he phoned us and said that he couldn’t resist offering us a deal there and then. Me and Alex went to meet him first and we thought he seemed like a genuine fan rather than just a businessman – I mean, he started the label from scratch, he owns the label and he decides who he signs rather than some MD in the boardroom telling him who he has to sign, so it all just seemed right and when the rest of the band met him we signed to Domino right there.”

It’s their rise to fame via the Internet, though, that has really opened many people’s eyes. Not since the cut’n’paste fanzine days of 70s era punk has any phenomenon arrived on such a large scale without the permission of the corporate directorate.

“The way it’s happened has all come about by accident to be honest,” says Matt. “We didn’t even know how to upload songs on the Internet. We used to hand demos out at gigs and people ended up putting the songs on file sharing networks. Those songs though, they’re only the demo versions. I mean, some of them sound pretty good, but some of them are a bit rough and ready. We’ve re-recorded a lot of those songs for the album.”

So does the album basically consist of better-produced versions of the songs on your demos?

“There are some of them on there but we’ve loads of new ones as well. The big difference between the record and our previous demos is that we recorded everything together so it actually sounds like an album rather than a collection of songs,” states a proud Matt Helders. “The album’s nearly finished now. We’ve recorded everything, and then next week we’re in London hoping to complete the final stages of the mixing.”

The band’s next single, ‘When The Sun Goes Down’, focuses on the story of a “scummy man”, something that dates back to the band’s old rehearsal room in the red light area of Neepsend. Matt takes up the story as to how the main character of the song came about.

“It’s not about one person in particular. It’s actually about anyone who’s ever experienced someone like the scummy man in the song. We used to practice on this industrial estate near the skate park in Neepsend, and gradually as the sun went down, all of the prostitutes and pimps would come out to play, as it were. Some of the engineers who work there would collar us when we were pulling up and say that it was alright in the day but you need to watch yourself after dark. Many a time when we’ve been loading or unloading our gear, some dodgy geezer would come over and ask us how much a guitar was worth, and on one occasion we had a prostitute knocking on the car window asking to lend her some money.”

If 2005 was the year that Leeds finally broke away from the shackles of Manchester, and more importantly, London, does that mean that next year a whole host of bands can do the same thing from Sheffield and its surrounding areas, particularly in the wake of the Monkeys’ success?

“Yeah definitely,” says the confident looking sticksman. “It’s a really vibrant scene here at the moment. I can’t quite put my finger on what’s happening but there are loads of good bands here. You’ve got Milburn, Trap 2, the Harrisons, The Long Blondes, Bromheads Jacket, Stony. Then you’ve got a guy who’s making really good dance music with clever lyrics called The Reverend. It does seem to be really kicking off here at the minute. It’s quite funny when you read the music press and they’re saying that so-and-so is the new this or that, because they’re really trying to cling onto their own London scene and they can see that they’re losing it to us lot from up north, but it shouldn’t be a competition.”

It just leaves me with one, all-important question remaining. Which half of Sheffield – red or blue – do the Monkeys support?

“Three of us are Wednesday and Andy (Nicholson) is United,” announces Matt, proudly. “I used to go a lot when I was younger but I’m not a big follower any more. Jamie (Cook) still goes. He’s a big Owls fan. He still plays for the local pub team in the Sheffield Sunday League. I can imagine that when word gets out to the opposing team in his next game that one of them Arctic Monkeys is playing for the other team, they’ll be queuing up to break his leg and sell it to the Sunday papers, y’know, kick and tell!”

With sold out European and Japanese tours taking them up to the end of the year, a place already confirmed alongside Maximo Park on January’s NME sponsored “Brats” tour and then a trawl round some of the UK’s bigger venues planned for April in support of the album, it’s a safe bet to assume these Monkeys are going to be around for a long time to come.