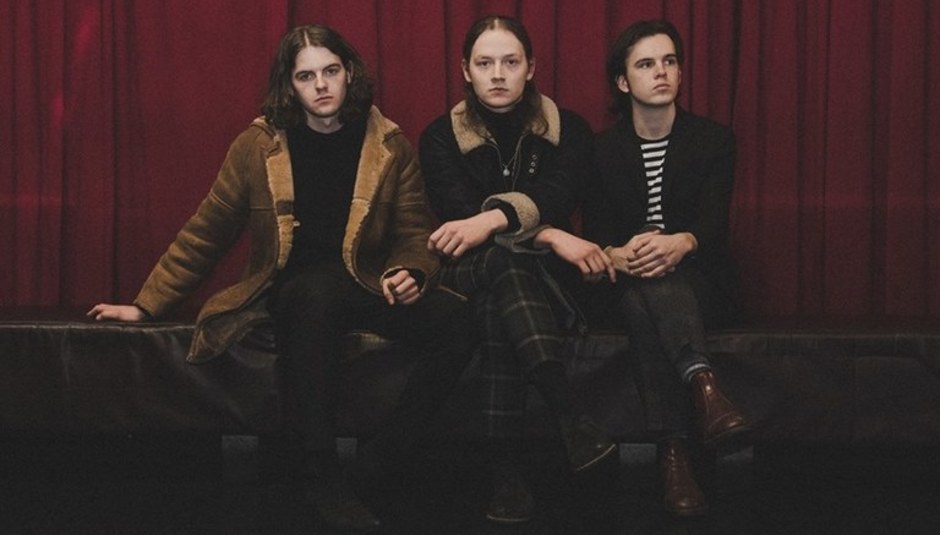 From Doncaster To Columbia: DiS Meets The Blinders

From Doncaster To Columbia: DiS Meets The Blinders

The Blinders have gained a reputation as one of the hardest working bands on the planet right now, thanks in no small part to their relentless tour schedule. Originally from Doncaster but now based in Manchester, they've spent the past couple of years playing anywhere and everywhere, picking up a dedicated bunch of followers along the way.

Of course, that wouldn't necessarily mean a great deal if they didn't have the songs to match. They have, in spades, and twelve of them sit at the heart of Columbia, their debut long player and one of 2018's finest to boot. Released in September via the Modern Sky label, its yet another socially and politically aware statement of intent set to an incendiary soundtrack of garage punk and swamp blues that's best described as Nick Cave slumming it or The Eighties Matchbox Arctic Monkeys.

Currently on tour until the middle of November, DiS caught up with the trio - Thomas Haywood (vocals, guitar), Charlie McGough (bass) and Matt Neale (drums) - prior to last month's riotous show at Nottingham Bodega.

How's the tour going? What's been your favourite show so far?

Matt Neale: Probably the opener in Manchester. It was the biggest show we'd ever played on our own without supporting someone bigger which is quite a milestone to achieve.

It's been quite a gradual build over the past couple of years, and I'll use Nottingham as an example where you've played the Chameleon, Maze, Rough Trade, and now the Bodega. Has that been the case in every city?

MN : I've noticed us selling out the smaller venues whereas we hadn't done before.

Thomas Haywood: I think people have got to know the songs now, so are enjoying the shows more. It's definitely been a step up on this tour.

The reviews for Columbia have been really positive all across the board. Were you expecting that kind of response?

MN: I wouldn't say we expected it. It came as a pleasant surprise, to be honest. We couldn't have asked for the album to be received any better.

TH: If you put all of those reviews together, they all say pretty much what we wanted to hear from people. They've all got the parts we wanted people to get so we're incredibly happy with how it's been received. Thankfully there's been no grey areas so far.

There seems to have been a recent upsurge in UK guitar bands that have something to say about the social and political climate. Why do you think that is, specifically now?

TH: I think a lot of it is to do with the impact of some of these decisions made by successive Tory governments and also the impact austerity's had on society. They've been in power for nearly ten years now and the results of their actions have seeped into society. As an artist and a writer, you write about what's around you. These events are unfolding right in front of our faces more than ever before. So naturally any talented songwriters - Idles, Shame, and Cabbage for instance - are writing about what they see happening in front of them, and we're doing the same. Why would you not? Why would you ignore that? It's right there. It's folly to ignore stuff like that.

With regards to the album, which songs are the oldest? Were there any songs written and recorded which didn't make it onto Columbia that might be revisited at some point in the future?

TH: There's a handful that go right back to the start of the band.

MN: We played 'I Can't Breathe Blues' at our second ever show about four years ago. So that's probably the oldest song on the album.

TH: Without being trivial about it you can tell which songs were written then crowbarred into the concept of Columbia. Like most concepts, it didn't actually come until we put those first drops of paint onto the canvas. We didn't go into the studio with the sole intention of writing an album. We thought we were just going to write an EP and then the songs started coming out so we thought, you know what, let's just do it.

'The Ballad Of Winston Smith' focuses on George Orwell and 1984. Do you see parallels between the book and what's happening around you today?

TH: The book changed our lives, so we had an opportunity to write about it and hold a mirror up to society. We didn't want to be crude about it. We didn't want to be Rage Against The Machine. So dystopian literature allowed us to mask our statements in this language that allowed us to write an album that's not necessarily anchored to any one specific place or time. You just get away with it I suppose.

TH: It's an important time so if bands want to latch onto this, do it now. Things like that often burn out very fast. Not that we're going out of our way to latch onto anything but at the same time it is very nice to feel a part of something.

Musically there's a lot of different influences ranging from Humbug era Arctic Monkeys, The Wytches and The Eighties Matchbox B Line Disaster through to Patti Smith and Bob Dylan on the album. Did you consciously set out to make Columbia as diverse as possible?

TH: We went in and basically said to our producer we want to sound like this, this, this, and this. But seriously, it just turned out that way.

MN: People often tell us 'Brave New World' sounds like 'Ziggy Stardust' so we went in initially with the intention of making it sound like a Bowie record. Same with 'Orbit (Salmon Of Alaska)' and Patti Smith. So I think eventually it became this collection of influences we all take in. It happens nearly every time we write a song where someone will say it sounds like someone else.

TH: It's a very interesting way to write as well because we can allow our sound to be familiar, but at the same time also letting it be new. It's like in 'Hate Song' where I sing "Dance! Dance! Dance! To the hate song." A lot of people say it reminds them of Joy Division, so we're allowing it to connect with them as they think it's familiar but actually, it's not. I don't know, call us geniuses of marketing!

Also 'Free The Slave' where you mention "Those crooked vultures...".

TH: Again that was just something we picked up on. I love that name so let's make it a lyric.

You relocated from Doncaster to Manchester in 2015. Do you think things would have turned out the same time had you remained in your hometown?

TH: It's a good question. I think moving to Manchester was a catalyst in terms of speeding things up. We haven't really changed as people.

Do you prefer playing live or in the studio?

MN: Until we made the album I'd say playing live, definitely. It would be nice to become a studio band. We never had the resource to do that so we went out on the road and learned our trade that way instead. Which in a way is why the album sounds like it does. It was born out of live shows, and the Columbia concept developed slowly as a result of that.

TH: That's very much how it happened. It just developed into its own beast. It was very much at the forefront of our minds to keep the rawness of our live show in the album.

Are there any plans for a follow up to Columbia? Any new songs in the pipeline as we speak?

MN: We've already started writing for the second album. There are about half a dozen songs ready, although we won't be playing any of them on this tour.

TH: We might throw one in later on towards the back end of the tour.

MN: It's difficult bringing new songs into the set at present because we've been playing most of the older ones for such a long time now. I think most of the diehard fans who were here from the start will be familiar with this set now bar the odd song, 'Where No Man Comes' being one we hadn't played live before this tour.

Charlie McGough: The set we're doing now is very similar to the one we played on the last tour. We needed to give it a new lease of life so we brought in an extra member on a couple of songs. That was the best way to do it without having to bring in new tunes.

Will you be playing and writing as a four-piece in the future?

TH: No not really. We are still very much a three-piece. It's just nice to have that option sometimes.

CM: Because we were conscious of playing a similar set to what we'd played in February, we've put all our energies on this tour into making the show better. We know how to play these songs inside out and back to front so we wanted to focus more on the performance whereby people would be invited into our theatre as opposed to just a bog standard gig.

What advice would you give to a new band that's just starting out?

MN: Hone your art by relentless gigging and keep writing.

TH: Also, befriend other bands. I think that's one thing that worked in our favour massively. Not to necessarily try and force a scene, but go to other people's gigs and eventually build a tight-knit community. I look at what Cabbage did for us and hopefully one day, someone will say something of the same calibre about us.

MN: It's what we've done with this tour as well. We've brought one of our favourite bands with us in Calva Louise. I think that's probably the best way to do it.

Are there any other new bands you'd recommend for Drowned In Sound and its readers to check out?

TH: Have you heard of a band called Avalanche Party? They're great.

MN: Afghan Sand Gang as well. They're very interesting. It's the guy who does sound for Cabbage. He's started his own band and they're really cool.

TH: They're very dreamy. I'd probably describe it as dance music for people that don't like dance music!

TH: There's a band called The Pagans from Birmingham. They're excellent too. They're a bit like Black Sabbath mixed with Rage Against The Machine and Biggie Smalls. They're one of the best bands I've seen in years.

TH: We want to go to Europe.

MN: We must be the only touring band at our level that's never played outside of the UK. So that's definitely the main goal.

Finally, what have been your favourite albums of 2018?

TH: The Idles album was excellent. That took us all by surprise.

CM: The Spiritualized album for me.

TH: It's been a great year for debuts. Because not many of the bigger groups have released music it's allowed this surge of new bands to come through.

CM: By the same token it feels like this year's gone so quick.

Columbia is out now via Modern Sky. For more information on The Blinders, please visit their Facebook and Music Glue pages.

Swingin' Party: DiS Does Left Of The ...