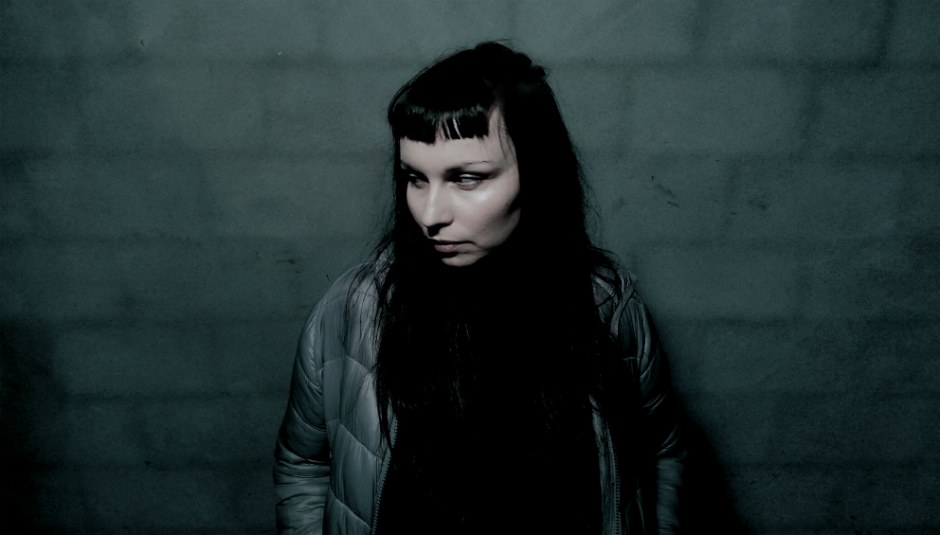 After the release of two critically acclaimed EPs, Hilary Woods spent 2017 writing and recording songs on an eight-track in an abandoned flat she was living in at the time. Layering piano, synth, tape machine, field recordings, vocals, drone, unadorned beats, and old string instruments, these songs have led to her debut album Colt. Straddling the acoustic and electronic worlds, Colt is an intensely personal journey through grief, abandonment, and mutating love. Woods navigates this journey with a lyrical potency that cuts through stark piano, sensuous synth work, and textural acoustics, songs evoking both the anguish of their content and the ecstasy of their craft.

She sat down with DiS to guide us through her dark, mysterious record.

The first single taken off the record, ‘Inhaler’, explores longing and homesickness. Lyrically it’s about the presence of something that remains absent. I really enjoyed layering and experimenting with foreboding synth sounds on this one, and the planted piano chords kind of peg the entire track to the ground. I was walking around singing this vocal melody in my head for a long time before recording it. I recorded many versions of this before running with the one that landed on the record here.

‘Prodigal Dog’ is a mutating, contorted love song written from a perspective gained in hindsight. In a way, it’s an exorcism of feelings steeped in loss and a purging of misplaced loyalty. This was the first track that I recorded at home for the record. The challenge was to find and create organic drums sounds; using layered brushes on snares and kick drums that both myself and James had programmed, we got there. Some of the string sound was achieved from bowing an electric guitar.

‘Take Him In’ is the track I currently feel closest to. It’s been a challenge to replicate this live, so I’ve recreated a version of it that embodies its essence whilst having to pick and choose the strands I’ll play on the piano. This track in some way reminds me of a piece of chant. An incantation of sorts addressed to an inner voice, an alternate lullaby set out to temper the mind. The repetition of close harmonies and single note synths create a trance-like hypnotism that touches on early music and drone.

‘Kith’ is a song about closing doors on a relationship, and realising the enormity of what is being left behind in favour of an inexplicable impulse driving one out into the unknown. The lyrics were there from the get-go and it grew very naturally. Producing this was a joy. James ran with the hairpin structure and brought lovely synths to the table. Together with textures layered underneath the guitar, multiple vocals, the single kick all the way thru and a field recording, this song is the only track on the record where guitar is the lead instrument, albeit there being plenty of subtle guitar work throughout.

‘Jesus said’ is a pursuit of catharsis. A pursuit to abandon oneself, to escape the noise of the head and inhabit the body. The lyrics explore ideas of expectations not being met, of feeling let down. In structure, it’s almost like a spinning dervish – it builds and builds into a trance, yet one that goes from being dreamy to one that is earthbound, grounded and gets into the bones. The song has humour in it and is light in touch, it brings light to the record.

‘Sever’ is a palette cleanser. The shortest track on the record, it was also the track that I edited the most. I did a lot of experimentation with this one and it now stands as being completely unrecognisable from its earlier life form. It constantly changed shape as the process of making the record unfolded, I ended up stripping all synths away and bringing it back to its most sparse self, the hiss and warm hum of the tape machine left pretty audible.

‘Black Rainbow’ is a dreamy song that touches on death and rebirth. Lyrically it explores night-time as a time of transformation, of escape and magic from the cold light of day. It draws on the idea that some relationships can only exist at night, and never manage to survive outside of that context or cross over and translate into the reality of the day to day. This track embodies an underbelly of gothic surrealism, reminds me of a dystopian 50s dance hall.

‘Limbs’ is the most personal track on the record. It was recorded early on and is also the youngest song in terms of writing. It consists primarily of voice and piano; I kept it spacious, the presence of silence within the track was important for me to maintain. I like playing this live, it surprises me; I’m still discovering hidden aspects of this song every time I play it. The lyrics touch on how the body never lies. It’s possibly my favourite song on the record.

The Way Songs Want Each Other: DiS Me...