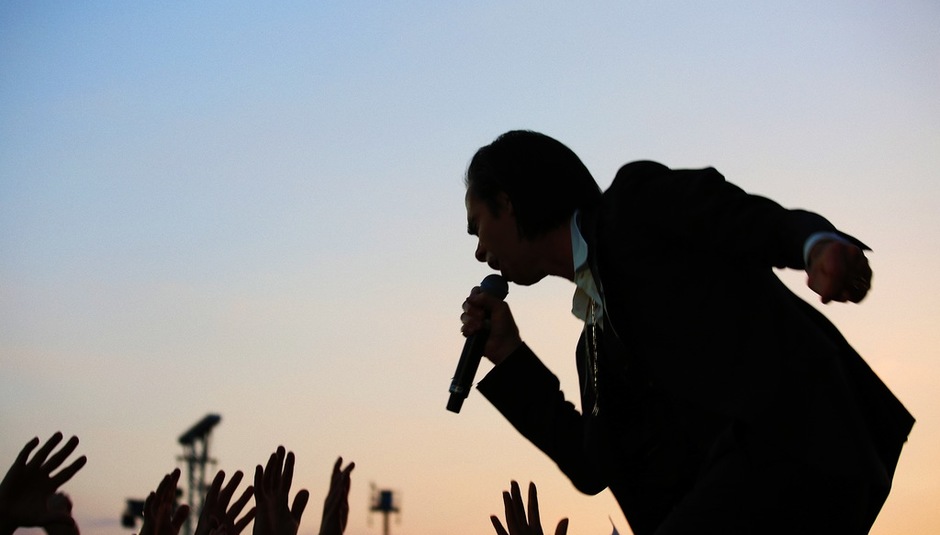 Not for the reasons you might think, but walking out of the gates of All Points East in Victoria Park I have three different incandescent shades of red in my head, and various hues of orange. The colours have grown brighter throughout the day...

Perhaps it was just the heat or fire-emoji-itis but three songs in, and the Bad Seeds sound like flames are pouring from every instrument. There’s lava pouring from Nick Cave’s lips. There are roman candles spinning. Even in the quiet bits. My mind’s eye is ablaze. Glimpses of torch marches, book burnings, Mad Max, Aztec rituals, and a myriad of other cliched flamin’ scenes (yes, even some from Peaky Blinders), whizz by.

Meanwhile, on the big screens, Nick Cave is strutting like life is just a stroll through Hades… and the next thing I know Kylie is on stage. And the fire is snuffed out. All of a sudden the cold blue hues of social media branding on mobile phone screens fills the crowd. A sea of citizen journalists, a cresting wave of bright white screens. The odd “cor!” but mostly there’s a silence as people start blurping variations of the same “news” into the digital ether. My blood doesn’t boil, it goes cold and the red mist lifts. The breeze - which I hadn’t felt all day - makes my skin prickle. After four sweaty hours of marching around, inhaling as much music as possible, the throb, the pulse, the euphoric glee comes to lurching to a halt.

Dong! The tubular bells sound like hangovers swaying... With a jolt, I’m back in the room (or Victoria Park, as it were) but it isn’t Kylie’s fault nor the phone-prodders. Y’see, I don’t seem to experience music, especially loud and very live music, by some of my favourite artists, in the way that other people seem to. I’m not a synesthesiac, but something happens, especially when I see Nick Cave. Yes, it is kind of “spiritual”. It’s a delicate balance, and it doesn’t take much to suck me out of “it”.

You could say it’s because he’s “a shaman” or some sort of “dark lord” but really what it is, is that he just doesn’t seem of this earth, whilst simultaneously, from a detached, almost voyeuristic position - like Bowie, Iggy, Kate Bush, Bjork, Tom Waits, Leonard Cohen, and the rest… - he seems to deliver the sucker punch of being more human than anyone else. Like an empath or a “mystic”.

The way in which Cave can convey every shade of pain, and can describe in minute detail the texture of fury. Most mortals need decades of therapy to realise they even have this rage, let alone the therapy required to unpack where it comes from. And it’s this equally microscopic and telescopic sensation of both his words and their soundtrack that makes people like me go into this other place when he walks on stage and the fire tumbles forth.

Amidst all this, as set-opener ‘Jesus Alone’ turned into ‘Magneto’, I had an epiphany of sorts. I started thinking how few of the artists with careers like Cave’s I want to hear the new stuff from, almost more so than the older stuff. In fact, I’d have been happy with just tunes from Dig, Lazarus, Dig!!! to now. Not that you’d catch me complaining as I howled along to ‘From Her to Eternity’ and whispered into the night sky the refrain to ‘Into My Arms’. All around me, people are 50 shades to the wind, high on music, and drunk on the bottles of wine, swaying to the sad romantic lilt of song that now’s become a part of every hip wedding (and a lot of deeply uncool ones too).

It was during ‘Girl in Amber’, just before Kylie took the stage, that I reached my place of bliss. That eye of a tornado, as interpreted by Pollock’s dripping paint or Kapoor wax. It feels like our ship is doomed, these waves keep crashing and we can’t weather this storm... can we?! The song’s muted lullaby tapped into that rich vein that every music junkie spends years trying to find. You often think you felt the semi-orgasmic rush of “it”, but it turns out what you experienced was an echo of a feeling. As if a ghost of a previous encounter was the same as the real thing. A song that feels almost wrong to hear Nick singing “I knew the world it would stop spinning now since you've been gone.” It feels like too much, and yet that feeling of being on a Viking longboat conquering a tempestuous sea, is pretty much how you feel - in this moment, as the raging sun sinks into an amber abyss - listening to Nick Cave at the peak of his powers.

The Other Shades of Red

The other shade of ruby I experienced in Victoria Park on the final day of All Points East was the red of a time when a song could give The Man a bloody-nose. The crimson may have dried on some of Patti Smith’s adversaries but she still packs a punch that I could write another essay about. The shared elation as the crowd thumped the sky during set opener ‘People Have the Power’ - following a reading of the footnote to Howl, to mark Ginsberg’s birthday - was a thrill, and the set pounded on from there...

Our Sunday service at the altar of St. Vincent felt like neon lightning before the thunder of Nick Cave. Annie Clark remains the most exciting force in modern music, constantly contorting the parameters of live shows and of songcraft. You leave a St. Vincent “show” with a head full of possibility, impossibility, and logic conundrums (not least the way her guitar playing pings off of Toko Yasunda from Enon’s synths) that you process in your sleep. There’s nothing slumbersome about St. Vincent’s set. Her synths feel like a modem loading in my mind. Annie’s guitar playing is sizzling and the guitar is so orange that I can still see it when I look away from the stage. The men have distorted faces - skin coloured balaclava hide them... It’s a really bright day-glow orange. The fluorescence is quite overwhelming…. Her lipstick smudged like a sailor drinking red wine… There’s a (staged) creepy guitar tech moment, where he lingers for far too long - a commentary on men and how they make women feel? The guitar is power.

When the set finishes, Annie has a smirk. This is the most playful and cheekiest set I’ve ever seen her play. Oh, and if it wasn’t obvious, she was absolutely incredible, and remains one of the most exciting artists in modern music.

Our Sunday service at the altar of St. Vincent felt like neon lightning before the thunder of Nick Cave. Annie Clark remains the most exciting force in modern music, constantly contorting the parameters of live shows and of songcraft. You leave a St. Vincent “show” with a head full of possibility, impossibility, and logic conundrums (not least the way her guitar playing pings off of Toko Yasunda from Enon’s synths) that you process in your sleep. 📸 by @eliserebelfox. ✏️ by @seaninsound . . #stvincent #saintvincent #annieclark #allpointseast #nickcave #neon #festival #gig #enon #gigphotography #livephoto #livephotography #live #london #hackney #orange #neonorange #guitar #riff #rock

Nick performs ‘Push The Sky Away’ and then it’s all over... As the embers of a Bad Seeds show begin to fade, you get this eclipse-like flash of sunrise and sunset. What just happened begins to feel increasingly real. It dawns on me, increasingly, that Nick Cave and his Bad Seeds, are, like, humans - even though no other creatures of this earth can contort air and fury like that!

Beyond Bereft - On Nick Cave's One More Time With Feeling
Push Every Other Band Away: Nick Cave and The Bad Seeds - Live Review

Photos by Elise Wouters. See more photos from All Points East on Drowned in Sound’s Instagram.