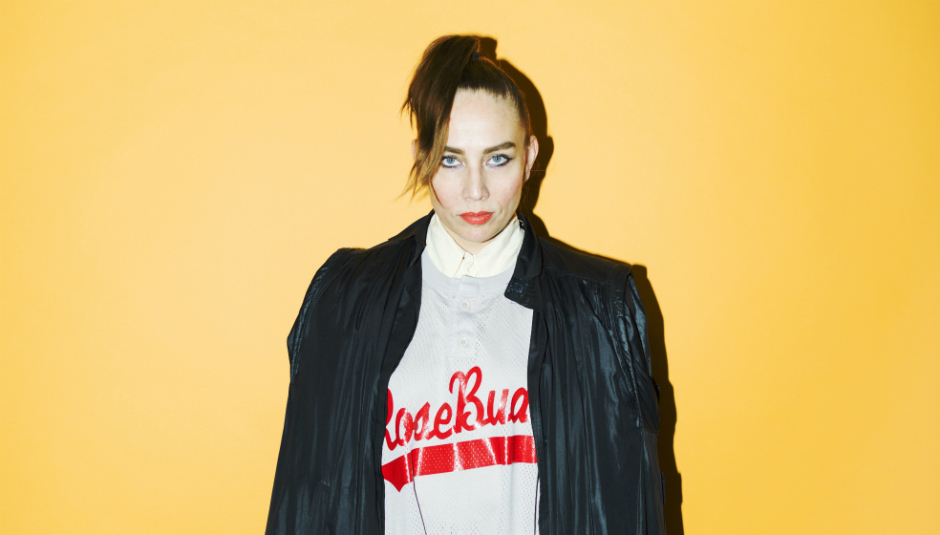 With a sound that is consonant with her previous collaborators The Knife and Robyn, Jenny Wilson has finally released her fifth album of electronic music, Exorcism. Having recorded her previous album, Demand The Impossible! while undergoing treatment and recovery for breast cancer, she has continued to use music to confront difficult life experiences. Exorcism is a relentless interrogation of her own experience of sexual assault; many of the tracks feature charged language which detail in plain terms the experience of her attack, and the processes of healing that follow. Notwithstanding the intense subject matter, it is a surprisingly energetic album. Wilson’s electro sound is not compromised by the subject matter. She uses the upbeat tempo to carry the ideas, to allow audiences to keep listening and not get caught up in pity or sorrow.

We caught up with Jenny Wilson over skype from Stockholm.

DiS: Dance music is often associated with escapism and euphoria. Do you think it is subversive to have this kind of electronic music album confront such gritty themes?

Jenny Wilson: This album is absolutely the most physical album I ever have made. The lyrics did not come from an intellectual process, but it was something completely different, which really sprung out from my guts, out of my stomach and heart, and it was necessary to make music that is also physical that you can dance or move or drive your car fast to. Something that really grips your body. I would never sit and play the piano and cry about all this.

So the theme of exorcism extends to the idea of something moving out or being cast out of your body?

Yeah, for me it's fun to listen to the album. I think it’s fun. It's fun to rehearse the songs, it's going to be fantastic to play it live. That's the kind of egoistic part of me that I really want to make music that I love myself that can energize me.

Sexual assault is even today associated with notions of shame, hiding, privacy, with sort of covering - not so much with exposure and making other people listen to the story. Are you concerned about the audience reaction?

Yes, I was very, very nervous when I was in the process of making this album because I did not know how much I would reveal, how much I would tell, how naked and brutal I would be. I didn't want to be a spokesperson for victims of sexual assault. I just wanted to tell my very private and personal story.

It took a long time for me to sort out how to do it. When I was pretty much in the beginning I thought maybe I should intellectualise it and make a story out of it, tell the story of all the women of the world. But it just doesn't make sense. And I think what happened was that the lyrics also became very simple, with not that many metaphors, not difficult poetry. It’s like this and this happened, I wonder about this, and I'm very fragile right now.

It's much more difficult to actually show the world that you’re very little and afraid and all shook up from something she didn't expect would ever possibly happened to you. I’m 40, 40 plus, and I have two pretty big kids, I have a career, beautiful friends all that. And suddenly this kind of ugliness happens and that kind of pushes you to ask yourself a lot of questions.

What are you imagining the audience will feel in response, do you want them to enjoy listening to the album, in some way?

I love the music, I think it's great.

Yeah, it is. And you can actually dance to it. I am fascinated by art that asks a lot of questions and gives you a lot of different answers at the same time. I don’t want anyone to feel anything specific, I just wanted to tell this story.

This was the story that I had and I know that this kind of topic touches people. For me it was it was kind of fantastic that the #metoo movement exploded just a month before my release and let me also feel more comfortable in making this kind of interview and talking and being very honest about what I have been writing about. Because I can definitely feel that people are much more enlightened that these things happen all the time. It doesn't matter who you are. That really helped me to dare do this.

You've spoken a lot about this being kind of a personal experience. However in songs like ‘Disrespect is Universal’ there are images in the album that represent a sense of randomness, that it could be any guy, any urban environment, that there is almost an inevitability to it?

I think that was one of the main questions that I had to struggle with after the trauma – anybody could be a victim, but even more, I had this kind of naive image of who’s the predator. And that confused me a lot and made me look at society because it's part of the structure that we allow this kind of power.

I agree. There were things like that in the album that made me feel a bit unsettled. But also it is an enjoyable album and I think it can be a good thing to have an album like this which is very honest but not too overwrought, which says these things happen, we need to be able to talk about them in different ways, in different places, even on the dance floor. Like, why not?

It's almost like it's becoming more conversational or something?

I have a very great feeling about how people both men and women pick this album up and how they talk about it how what kind of questions they ask, also because many people totally enjoy the music. I would never make music that doesn’t touch you. Music is such a universal language you can you can reach out to so many directions and so many levels, and I think that it's a superior tool to actually tell very strong stories.

Absolutely. I noticed there were these emotional arcs in some of the songs in the same way that you get in soundtracks for movies, I was wondering if that was a deliberate thing or if that's possibly just an effect of bringing these things together, because your storytelling is very explicit – it's not this abstract conceptual thing. Were you at all influenced by soundtracks composing the music?

During my last 20 years or something like that I've been listening to a lot of music in a broad area – a lot of you know hip hop, art music, a lot of African music, and a lot of soundtracks. I love Philip Glass, he has always been a great influence on how I think about making music.

In ‘The Prediction’ there was a kind of intensifying, in that same way that you hear in a lot of Philip Glass compositions, where inflexion was very subtle but it really changes the way you feel at a given point.

A lot of people have also asked me about the tempo shift in the song ‘Rapin’. The tempo shift was a way of telling this story even more intensely about how you feel as a victim, but actually, I didn’t think about it when I wrote it, it just happened. The music is a little bit like a soundtrack to a story I tell, perhaps not in all my songs but definitely all of the sounds in ‘Rapin’.

Do you think that this album will help you heal?

I think it helps me heal a bit because I have to bring this thing to the light all the time, talk about it, and that gives me distance. But I would not claim that to make an album is per se therapeutic. When you go through something like that you really have to work on so many different levels with yourself.

Exorcism is out on 20 April via Gold Medal Recordings. Jenny Wilson plays Birthdays, in London, on 25 April – tickets can be purchased here.

The Fangasm: The Midnight Organ Fight...